The History of Christingles

The idea of Christingles came from a Moravian Church in Germany in 1747. The minister, John de Watteville, gave children at the service a lighted candle with a red ribbon around it. This represented Jesus being the light of the world and the final prayer of that first service was "Lord Jesus, kindle a flame in these children’s hearts, that theirs like Thine become". The custom went around the world with the church. Missionaries brought the Moravian Church to England in the late 1700s. In Moravian churches, the Christingle Service is usually held on the Sunday before Christmas or on Christmas Eve.

The word Christingle could have come from several sources. It might be an 'English' version of 'Christkindl' (meaning little Christ child), the present bringer in some parts of Germany and other European countries, who represents the baby Jesus. It could be a the putting together of the words 'Christmas' and 'ingle'. Ingle is an old Scots word for fire and so that would make it mean the 'Christ Light'. As Christingles originally came from Germany, the first theory is more likely.

The idea came from John Pensom who was also known as "Mr Christingle"! People didn't think the service would work as making the Christingles would be too complicated - but they were wrong! The custom has spread through to all kinds of churches and is one of the most common and popular Christmas services in the UK, especially among children. Christingles services still normally raise money for children's charities. 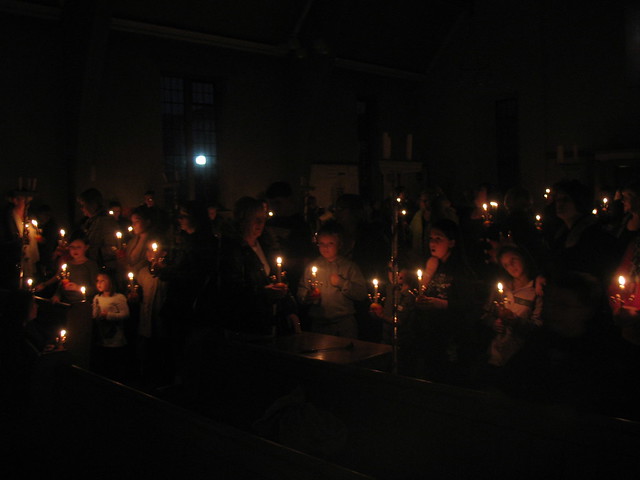 There's a New Year's Day tradition in Wales which dates back to the middle ages called Calennig. Children would go round houses, singing songs and rhymes and wishing people good luck for the new year. They hope to get some money and treats in return! Some adults would go Calennig very early in the morning/night on January 1st and sing very loudly! It has similarities to Carol Singing and Wassailing. People would often carry a Calennig apple - an apple on a tripod of twigs or sticks (so it can stand up) and decorated with nuts, cloves and greenery. This has sometimes been associated with Christingles although they're not related at all! Calennig means 'New year celebration or gift/first day of the month'. Calennig can also now mean the big New Years celebrations held in Welsh cities like Cardiff.