There are many different reasons why candles are associated with Christmas, although no one knows when they first became connected!

They were used during ancient winter solstice celebrations a way of remembering that spring would soon come.

One of the earliest records of candles being used at Christmas is from the middle ages, where a large candle was used to represent the star of Bethlehem. Jesus is sometimes called 'the Light of the World' by Christians. This might have started the custom of the Advent Crown and Advent Candles.

Candles are also used during Hanukkah, the Jewish Festival of light which is also celebrated during winter. During the eight nights of Hanukkah, a candle is lit in a special menorah (candelabra) called a 'hanukkiyah'.

Candles are also used in the modern winter festival Kwanzaa, where a special candle holder called a kinara, that holds seven candles is used. 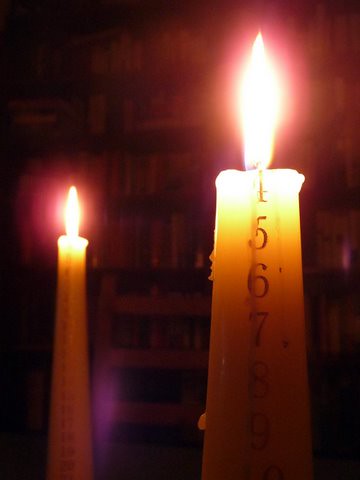 Perhaps the most famous use of candles at Christmas are Carols by Candlelight Services. These are services when the church is only lit by candles.

In some parts of Ireland, it was traditional to have a Yule candle instead of a Yule Log.

In Southern India, Christians often put small oil burning clay lamps on the flat roofs of their homes to celebrate Christmas. Christians in China use paper lanterns to decorate their Christmas trees. Candles are also used as part of the St. Lucia's or St. Lucy's day celebrations in Sweden.