Midnight mass is a very important service for Christians in India, especially Catholics. The whole family will walk to the mass and this will be followed by a massive feast of different delicacies, (mostly curries) and the giving and receiving of presents. Churches in India are decorated with Poinsettia flowers and candles for the Christmas Eve Midnight Mass service.

Instead of having traditional Christmas Trees, a banana or mango tree is decorated (or whatever tree people can find to decorate!). Sometimes people use mango leaves to decorate their homes.

In Southern India, Christians often put small oil burning clay lamps on the flat roofs of their homes to show their neighbors that Jesus is the light of the world.

Christians in Goa love to celebrate Christmas! Goa has lots of 'western' customs as part of their Christmas as Goa has historical connections with Portugal. Most Christians in Goa are Catholics. People like to go carol singing around their neighbors for about a week before Christmas. Christmas Trees are also very popular as is a 'traditional' rich fruit Christmas Cake! Lots of local sweets are also eaten at Christmas in Goa. Favourite sweets include neureos (small pastries which are stuffed with dry fruit and coconut and fried) and dodol (like toffee that has coconut and cashew in it). These are other sweets are often part of 'consuada' when people make sweets before Christmas and give them to their friends and neighbors. Most Christian families also have a nativity scene with clay figures in it.

On Christmas Eve, Christians in Goa hang out giant paper lanterns, in the shape of stars, between the houses so that the stars float above you as you walk down the road. The main Christmas meal is also eaten on Christmas Eve and is also 'western' with roast turkey or chicken being popular. After the meal, Christians head to Church for a Midnight mass service. After the service the church bells ring to announce that Christmas Day has arrived. Many Christians in Goa also celebrate Epiphany and remember the Wise Men visiting Jesus.

Christians in Mumbai use many Christmas traditions from Goa including the star lanterns and manger scenes (people like to make sure they have the best the nativity scene!). 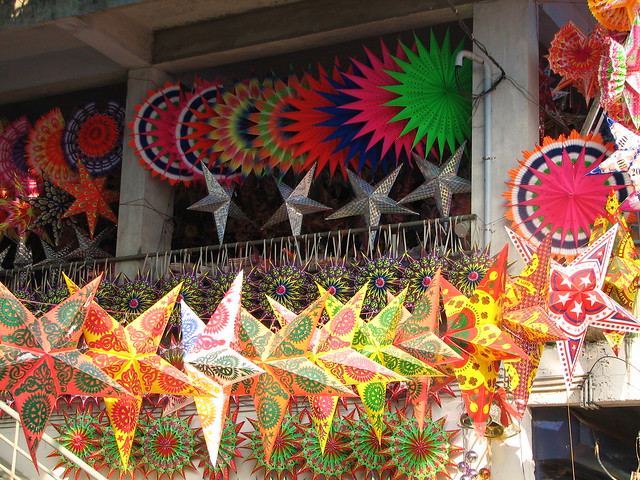 In north-west India, the tribal Christians of the Bhil folk, go out night after night for a week at Christmas to sing their own carols the whole night through. They go to surrounding villages singing to people and telling the Christmas story.

In South West India, in the state of Kerala Were, 22% of the state's 33 Million population are Christians and Christmas is an important festival. Traditional Catholics fast don't eat from 1st to 24th of December - until the midnight service. Every house will be decorated with a Christmas star. During the start of the Christmas season, almost all the stationary shops will be filled with new and variety Christmas stars. People make cribs in their homes and Churches.