Christmas in Venezuela is one of the most colorful in Latin America and the whole world! Firework shows are very popular.

Some traditional Christmas music in Venezuela is 'Gaita' music. This is a type of folk music from the Zulia state. It's played on several instruments including the 'Cuatro' (a guitar with four strings) a 'Tambora' (a Venezuelan drum), the 'Furro' (a type of drum but it has a stick coming up through the middle of the skin of the drum - this can make it have some different sounds) and the 'Charrasca' (a ribbed tube that you rub a stick up and down). The singers are known as 'Gaiteros'. Another type of music in Venezuela is called 'Aguinaldos y Parrandas'. This style is also popular at Christmas as the songs are like carols.

Some homes will have a Christmas Tree, but they're normally artificial ones as pine and fir trees aren't common in Venezuela. Nativity Scenes (Nacimiento) are very popular and in some regions they are more common than Christmas Trees.

Going to Midnight Mass (Misas de Aguinaldo) is very popular and there many other masses and church services in the days before Christmas. In Caracas, the capital of Venezuela, there's a tradition of people rollerskating to the early morning church services from 16th to 24th December. The roads are often closed to traffic by 8.00am to make it safe for people to skate! 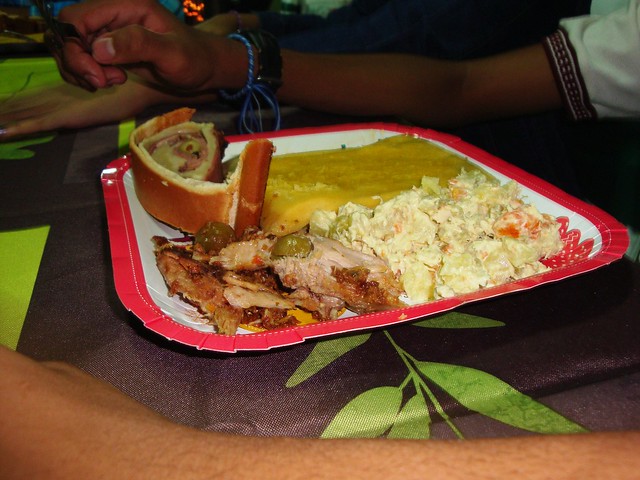 Traditional Venezuelan Christmas foods include 'Hallacas' - a mixture of beef, pork, chicken, capers, raisins, and olives that is wrapped in maize and plantain leaves and tied up with string into a parcel and then boiled or steamed afterwards; the Pan de Jamón - a type of bread that's made with puff pastry, filled up with ham, raisins, olives and bacon and shaped like a 'swiss roll'! Chicken Salad and Pernil (a leg of pork).

Main presents are given at midnight on Christmas Eve. In Venezuela presents are brought by 'San Nicolás' (St. Nicholas) & 'Niño Jesús' (Baby Jesus).