Ethiopia (and especially the Ethiopian Orthodox Tewahedo Church) celebrates Christmas on January 7th, not December 25th. The Ethiopian Calendar has different months - and Christmas in on the 29th of Tahsas. Many other orthodox churches around the world also celebrate Christmas on the 7th January. The calendar the Ethiopian Orthodox Tewahedo Church uses originally came from calendar used by the Coptic Orthodox Church (which is based in Egypt) but now has it's own special days.

The Christmas celebration in the Ethiopian Orthodox Church is called Ganna or Genna. Most people go to Church on Christmas day.

Many people take part in a special Advent fast during the 43 days before Christmas. It starts on 25th November and is known as the 'Fast of the Prophets' (Tsome Nebiyat). During this time, traditionally only one vegan meal is eaten each day. It's a vegan meal because during the fast, foods including meat, dairy, eggs and wine aren't eaten.

For Ganna, people get dressed in white. Most people wear a traditional garment called a Netela. It's a thin white cotton piece of cloth with brightly colored stripes across the ends. It's worn like a shawl or toga. If you live in a big town or city you might wear 'western' clothes. People go to church mass on Christmas Eve (called the gahad of Christmas) at 6.00pm and the service finishes about 3.00am on Christmas Day.

The Ethiopian capital city is Addis Ababa. It's a modern city. Most people who live outside big cities live in round house made of mud-plastered walls which have thatched cone-shaped roofs. Sometimes houses in the country are rectangular and made of stone.

The design of Ethiopian Church is similar to the houses. In the country, they are often very old and have been carved out of rock. In cities, modern churches are built in three circles, each within the others.

The choir sings from the outer circle. Everyone who goes to church for the Ganna celebrations is given a candle. The people walk around the church three times in a solemn procession, holding the candles. They then go to the second circle to stand during the service. The men and boys are separated from the women and girls. The center circle is the most important and holy place in the church and is where the priest serves the Holy Communion or Mass. 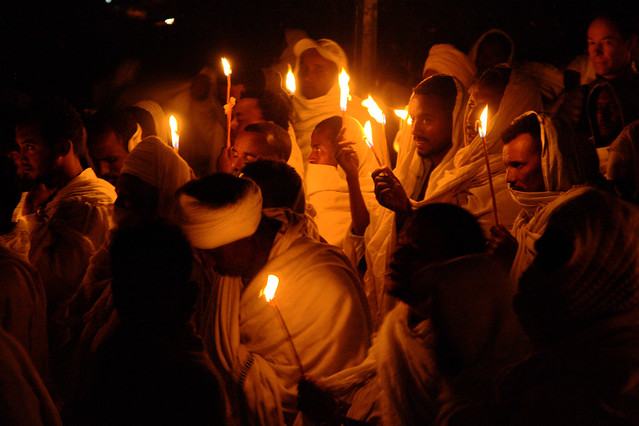 It's also a tradition that one of the Wise Men who visited Jesus came from Ethiopia.

Around the time of Ganna, the men and boys play a game that is also called ganna. It's played with a curved stick and a round wooden ball, a bit like hockey.

Traditional Christmas foods in Ethiopia include 'wat' which is a thick and spicy stew that contains meat, vegetables and sometimes eggs (sounds yummy!). Wat is eaten on a plate of 'injera' - a flat bread. Pieces of the injera are used as an edible spoon to scoop up the wat.

Twelve days after Ganna, on 19th January, Ethiopians start the three day celebration of Timkat. It celebrates the baptism of Jesus. Children walk to church services in a procession. They wear the crowns and robes of the church youth groups that they belong to. Adults wear the Netela. The priests wear red and white robes and carry embroidered fringed umbrellas.

Musical instruments are played during the Timkat procession. The sistrum is a percussion instrument with tinkling metal disks a bit like a vertical tambourine. A makamiya, a long T-shaped prayer stick is used to keep the rhythm and is also used by the priests and a stick to lean on during the long Timkat church service!

Ethiopian men also play a sport called yeferas guks. It's played on horseback and the men throw ceremonial lances at each other (sounds rather dangerous!).

People don't give and receive present during Ganna and Timkat. Sometimes children might be given a small gift of some clothes from their family members. It's more a time for going to church, eating lots and playing games!

Santa Claus is a fairly recent visitor to Ethiopia, only being known about through 'western' Christmas traditions. In the Amharic language, Father Christmas or Santa Claus is called 'Yágena Abãt' which means 'Christmas Father'.