On Christmas Eve, children, especially boys, often go out singing 'kalanda' (carols) in the streets. They play drums and triangles as they sing. Sometimes they will also carry model boats decorated with nuts which are painted gold. Carrying a boat is a very old custom in the Greek Islands.

If the children sing well, they might be given money, as well things to eat like nuts, sweets and dried figs.

An old and very traditional decoration is a shallow wooden bowl with a piece of wire suspended across the rim. A sprig of basil wrapped around a wooden cross and hangs from the wire. Some water is kept in the bowl to keep the basil alive and fresh. Once a day someone, usually the mother of the family, dips the cross and basil into some holy water and uses it to sprinkle water in each room of the house.

Every December, in Aristotelous Square in the city of Thessaloniki (which is the second biggest city Greece) a huge Christmas Tree and three masted sailing ship are put up. It's a popular tourist attraction. There are also large boat displays in other large Greek cities like Athens. Decorated ships are an old tradition in Greece where small ships were put up in homes when sailors had returned from sea voyages.

Christmas Trees are popular in Greece. The first known Christmas tree in Greece was in 1833 and was set-up by King Otto next to a large decorated boat. Over time, especially in the late 20th century, decorated Christmas trees became more popular than decorating a boat. But now having a boat as well as a tree is becoming more popular! 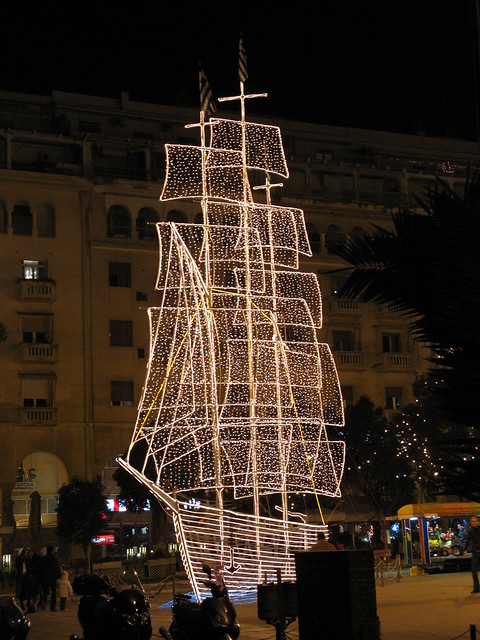 Going to a Midnight Mass Service is very important for most Greeks. After the service people can go home and end their Advent fast.

The main Christmas meal is often lamb or pork, roasted in an oven or over an open spit. It's often served with a spinach and cheese pie and various salads and vegetables. Other Christmas and new year foods include 'Baklava' (a sweet pastry made of filo pastry filled with chopped nuts and sweetened with syrup or honey), Kataifi (a pastry made from a special form of shredded filo dough and flavored with nuts and cinnamon), Theeples (a kind of fried pastry). The pastries are either eaten for breakfast or as starters. Another popular Christmas dessert are melomakarono, egg or oblong shaped biscuit/cakes made from flour, olive oil, and honey and rolled in chopped walnuts. Another popular biscuit in Greece are kourabiedes, which are a butter and almond cookie, a bit like shortbread. 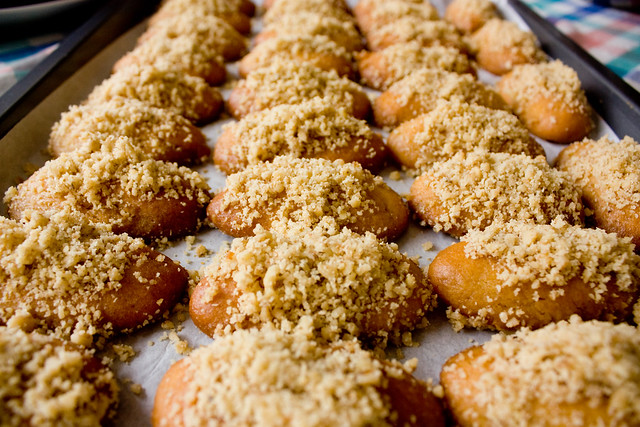 A traditional table decoration are loaves of 'Christopsomo' (Christ's Bread or Christmas bread). It's a round sweet bread which is flavored with cinnamon, orange and cloves. The top is decorated with a cross. The bread is made on Christmas Eve ready to be eaten on Christmas Day. 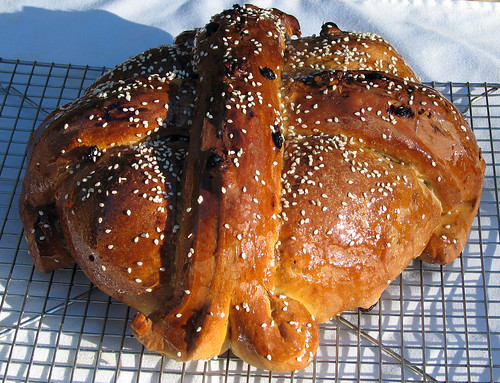 In Greece, presents are often brought to children by Aghios Vassilis / Άγιος Βασίλης (Saint Basil/Saint Vasilis) on the 1st January as that is St Basil's Day.

On New Year's Eve many families will have a big meal and play games. At midnight there are lots of hugs, kisses and best wishes for the new year. New Year kalanda songs/carols might also be sung. On New Year's Day, in many places in Greece, there is the tradition of Bounamathes (bouna-MA-thes). Adults in the family give money and gifts to the children wishing them a happy new year.

Another big event in many houses on New Year's Day is the Pothariko (pothari-KO). This is a tradition that says a child that is thought to be 'lucky' or the first-born of a family or sometimes the man of the house must be the first person to enter a house that year - and they must do it with their right foot. The Greeks believe that this will bring luck to the household the whole year. In some areas of Greece the person holds a pomegranate, and they break it at the front door before entering the house. The seeds are scattered which symbolizes the happiness and the good fortune for the house - and the more pomegranate seeds the better!

There is also a special St Basil's Day cake called 'Vasilopita' (vasi-LO-pita). The cake has a coin cooked inside it. In some parts of Greece the cake is light and sweet sponge cake, but in others it's more like a bread. Whoever finds the coin in their slice is thought to be lucky for the year.

In some families, the father of the house cuts the Vasilopita and gives out the pieces. Traditionally, the first slice is for Jesus, the second it is for Mary, the third is for the poor people and the fourth is for the household. Then the rest of the slices go to the members of the family/household depending on their age, with the oldest person first.

People in Greece also celebrate Epiphany on the 6th January. In the Greek Orthodox Church, Epiphany celebrates Jesus's baptism when he was a man. It's also known as 'The Blessing of the Waters'. There are many events throughout the country where young men dive into really cold lakes, rivers and the sea to try to be first to get a cross which has been blessed by a priest and thrown into the water. Whoever gets the cross first is meant to have good luck during the coming year. Epiphany festivals also include blessings of boats & ships, music, dancing and lots of food.