In Poland, Advent is the beginning of Christmas Time. It's a time when people try to be peaceful and remember the real reason for Christmas. People try not to have excess of anything. Some people give up their favorite foods or drinks and parties and discos are not widely held. Some people also go to Church quite frequently. There is the tradition of the 'roraty', special masses (or communion services) held at dawn and dedicated to Mary for receiving the good news from the angel Gabriel.

During Advent, people also prepare their houses for Christmas. There's lots of cleaning and people wash their windows and clean their carpets very thoroughly. Everything must be clean for Christmas day!

Advent Calendars are also popular. some people like to make calendars for their families, so they are more personal.

St Nicholas' Day is celebrated on the 6th December. Children hope that they will get a little present from 'Small Nicholas' (Mały Mikołaj) often left in a shoe or near a fireplace. They might also get presents on Christmas Eve.

Before Christmas, children in schools and preschools take part in "Jasełka" (Nativity Plays). They are very popular and often more secular than religious. The Christmas story is also sometime put into modern times.

The smell of tangerines in schools or workplaces is widely thought to mean that Christmas time is about to start!

Poland is a largely catholic country and Christmas Eve is a very important and busy day. It's now often the most important day over Christmas - even though it's not a holiday but Christmas and the 26th December are holidays! Traditionally it was day of fasting and abstinence (not eating anything) and meat is not normally allowed to be eaten in any form.

Christmas Eve is known as Wigilia (pronounced vee-GHEE-lee-uh). Traditionally, the house is also cleaned and everyone wore their best festive clothes. The main Christmas meal is eaten in the evening and is called "Kolacja wigilijna" (Christmas Eve supper). It's traditional that no food is eaten (or sometimes the first present opened) until the first star is seen in the sky! So children look at the night sky to spot the first star! Looking for the first star is also a reminder of the Wisemen who followed a star to visit Jesus.

On the table there are 12 dishes - they are meant to give you good luck for the next 12 months. The meal is traditionally meat free, this is to remember the animals who took take of the baby Jesus in the manger. Everyone has to eat or at least try some of each dish. For catholics the 12 dishes symbolize Jesus's 12 disciples. Like in many Catholic countries, Christmas Eve is often a 'fasting day' meaning that some people don't eat anything until after sunset (when the Church day officially ends). Some people in central Poland say that at midnight the animals can talk (but I don't think that's very likely)! 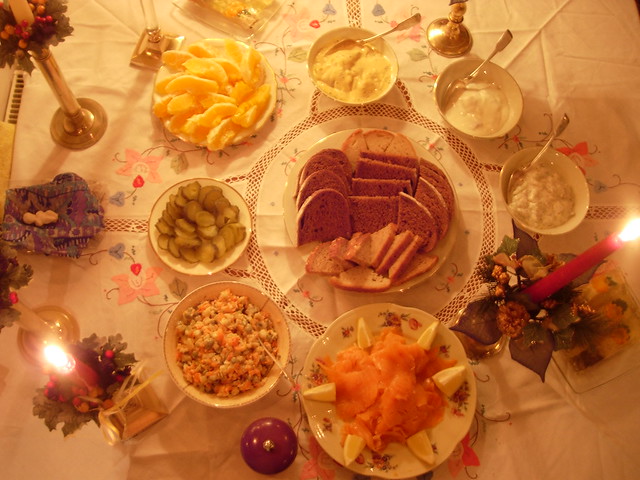 One of the most important dishes is "barszcz" (beetroot soup) and it's obligatory to have it. If you really hate it, you can eat mushroom soup instead! The barszcz may be eaten with "uszka" (little dumplings with mushrooms) or "krokiety" (pancakes with mushrooms or/and cabbage, in breadcrumbs, fried on oil or butter).

Carp is often the main dish of the meal. The fish itself is traditionally bought a few days earlier alive and it swims in the bath until it's killed by the lady of the house! Now most people just buy a fillet of carp instead (especially if you only have a shower and not a bath in your house!). The carp's scales are said to bring luck and fortune and some are kept for the whole year (e.g. in wallets). Traditionally, some older ladies put them in their bras for the time of the supper and give them next day to the guest for good luck!!!

"Bigos" is a dish which can be eaten either hot or cold. It's made of cabbage, bacon, sometimes dried plums - so it is saved for Christmas day or the 26th as it has meat in it. It is made about a week or so before Christmas Eve, because with each day it gets better. Pierogi are also popular.

Herrings are very popular and usually are served is several ways: in oil, in cream, in jelly. Each household has their own recipe that say is 'the best in the whole wide world'!

In most houses there is also "kompot z suszu" that is drink made by boiling dried fruits and fresh apples.

The most popular desserts at Kolacja wigilijna are "makowiec", a poppy seed roll made of sweet yeast bread, "kutia" mixed dried fruits and nuts with wheat seeds, "piernik" a moist cake made with honey (that's like gingerbread) and gingerbreads (which are usually dry and very hard).

At the beginning of the meal, a large wafer biscuit called an 'opłatek', which has a picture of Mary, Joseph and Jesus on it, is passed around the table and everyone breaks a piece off and eats it and says a Christmas greeting. Sometimes a small piece may be given to any farm animals or pets that the family may have. An empty place is often left at the meal table, for an unexpected guest 'Niespodziewany Gość'. Polish people say that no one should be alone or hungry, therefore if someone unexpectedly knocks on the door they are welcomed. In some houses, the empty place is to commemorate a dead relative or for a family member who couldn't come to the meal.

Sometimes straw is put on the floor of the room, or under the table cloth, to remind people that Jesus was born in a stable or cow shed.

The worst part about the Christmas Eve supper is that you can't open the presents before it has finished! Older members of the family (who traditionally begin and end this meal) always make it last a long time. In most houses, before the presents are opened, the family sings carols together. Children really want to open the present and sometimes more carols are sung just to tease the children!

Presents are brought by "Święty Mikołaj" (St Nicholas/Santa Claus), but in some parts of Poland there are different present bringers (because during the 19th century the borders of Poland were different, so people had different traditions).

In the east (Podlaskie) there is "Dziadek Mróz" (Ded Moroz/Grandfather Frost), in parts of western and northern Poland there's "Gwiazdor", the Starman. The starman is not always all-good - if someone was bad, he might give him "rózga", a birch-stick! In the Śląskie and Małopolskie regions in the south of Poland it might be "Dzieciątko" (the Baby Jesus), and in southern areas of Poland it might be "Aniołek" (Little Angel) or "Gwiazdka" (Little Star)!

The Christmas tree is also often bought in and decorated on Christmas Eve. It is decorated with a star on the top (to represent the Star of Bethlehem), gingerbreads, lights (previously candles) and "bombki" which are baubles and glass ornaments in different shapes (though most often they are spheres). They are usually hand-made, painted or decorated in other way. In the east of Poland the decorations are traditionally made of straw and are very beautiful. In some parts of Poland tress will also have an artificial spider's web as a decoration because of the story of The Christmas Spider. In some houses there is also a custom of breaking one of the Christmas Tree decorations (e.g. breaking a glass bauble) to scare the evil out of the house for the whole next year!

Christmas Eve is finished by going to Church for a Midnight Mass service.

A very popular film to watch in Poland over Christmas is 'Home Alone!' In Poland it's called 'Kevin Sam w Domu' which means 'Kevin Alone in the House'. In 2010 it wasn't going to be shown, but so many people complained that it was put back on TV!

The days after Christmas are often spent with family and friends.

People in Poland also like kissing under the mistletoe!