In Mexico, Christmas is celebrated from December 12th to January 6th.

From December 16th to Christmas Eve, children often perform the 'Posada' processions or Posadas. Posada is Spanish for Inn or Lodging. There are nine Posadas. These celebrate the part of the Christmas story where Joseph and Mary looked for somewhere to stay. For the Posadas, the outside of houses are decorated with evergreens, moss and paper lanterns. Lighting the way for posadas might be 'luminarias' or 'farolitos'. These are paper sacks, with shapes cut into them, which are partly filled with sand and then have a candle put in them. They represent 'lighting the way' for somewhere for Mary and Joseph to stay.

In each Posada, children are given candles and a board, with painted clay figures of Mary riding on a donkey and Joseph, to process round the streets with. They call at the houses of friends and neighbors and sing a song at each home. The song they sing is about Joseph and Mary asking for a room in the house. But the children are told that there is no room in the house and that they must go away. Eventually they are told there is room and are welcomed in! When the children go into the house they say prayers of thanks and then they have a party with food, games and fireworks.

Each night a different house holds the Posada party. At the final Posada, on Christmas Eve, a manger and figures of shepherds are put on to the board. When the Posada house has been found, a baby Jesus is put into the manger and then families go to a midnight Church service. After the Church service there are more fireworks to celebrate the start of Christmas.

One game that is often played at Posada parties is piñata. A piñata is a decorated clay or papier-mâché jar filled with sweets and hung from the ceiling or tree branch. The piñata is often decorated something like a ball with seven peaks around it. The peaks or spikes represent the 'seven deadly sins'. Piñata's can also be in the form of an animal or bird (such as a donkey). To play the game, children are blind-folded and take it in turns to hit the piñata with a stick until it splits open and the sweets pour out. Then the children rush to pick up as many sweets as they can!

As well as the posada's, there is another type of Christmas play known as Pastorelas (The Shepherds). These tell the story of the shepherds going to find the baby Jesus and are often very funny. The devil tries to stop the shepherds by tempting them along the way. But the shepherds always get there in the end, often with the help of the Archangel Michael, who comes and beats the devil!

Nativity scenes, known as the 'nacimiento', are very popular in Mexico. They are often very large, with the figures being life size! Sometimes a whole room in a house is used for the nacimiento, although this is less common now. The figures are often made of clay and are traditionally passed down through families. As well as the normal figures of the Mary, Joseph, Jesus, the Shepherds and Three Kings, there are often lots of other figures of different people, including women making tortillas, people selling food and different animals and birds, like flamingos! The figures can be bought from markets in cities all over Mexico. The baby Jesus is normally added to the scene during the evening of Christmas Eve. The Three Kings are added at Epiphany.

Christmas Trees are becoming more popular in Mexico, but the main/most important decoration is still the nacimiento.

Christmas Eve is known as 'Noche Buena' and is a family day. People often take part in the final Posada and then in the evening have the main Christmas meal. Popular dishes for the main Christmas meal include Pozole (a thick soup made with hominy, chicken or pork and chilies with is topped with greens), roast turkey, roast pork, tamales, bacalao (salt cod), romeritos (a green vegetable that's cooked in a mole sauce with potatoes and shrimps) and there are normally salads served as side dishes such as Ensalada Nochebuena (Christmas Eve salad). For dessert bunuelos are very popular, they are fried pastries sprinkled with sugar and cinnamon or a hot sugar syrup. Bunuelos come in two shapes flat and round/ball! To drink there might be Ponche (a warm Christmas punch made with fruit) and Rompope (a drink like egg nog which often has rum added to it!).

At midnight, many people go to a Midnight Mass service, known as the 'Misa de Gallo' (which means Mass of the Rooster as people are up early like Roosters!). There are lots of fireworks to celebrate Christmas Day.

On the 23rd December, in the town plaza of Oaxaca City in the Mexican state of Oaxaca, there's 'Noche de Rábanos' (the Night of the Radishes). There are competitions, in different categories, for scenes made up of several carved radishes. The traditional category is for scenes of things like the nativity story, Oaxacan traditions and local wildlife like alligators. The free category has more modern themes like caricatures of politicians. There are different prizes for adults and children.

The radishes used for carving are grown especially for the Noche de Rábanos and they're extra large - often more than 50cm (nearly 20 inches) long and can weigh up to 3kg (6.5lbs). Over 10 tons of radishes are normally used during the festival! The radishes used often have red skin and white flesh, so that when carved, there's a bright difference between the two. They are harvested around the 18th December and carved ready for the 23rd. 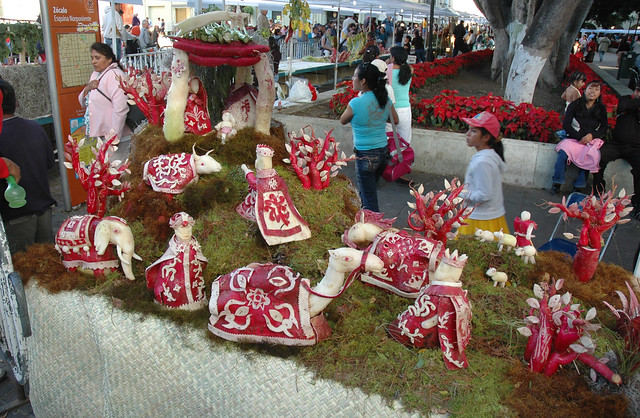 The competition of Noche de Rábanos started in 1897. Oaxaca has a tradition of wood carving and farmers began to carve radishes into Christmas figures and table centrepieces to sell at the Christmas market held on the 23rd December.

One legend says the selling and carving of radishes at the Christmas market started in the mid 1700s when two monks brought some extra large radishes to the market. The major of Oaxaca City started the competition in 1897 as a way of attracting more people to the Christmas market.

Thousands of visitors now visit the market every year to see the carved radishes on Noche de Rábanos. The radishes start going brown after a few hours.

On Christmas Eve churches parade floats through the plaza (these don't have radishes on them!) and on Christmas Day there are fireworks and Christmas meals.

People in Mexico also celebrate 'los santos inocentes' or 'Day of the Innocent Saints' on December 28th and it's very like April Fools Day in the UK and USA. 28th December is when people remember the babies that were killed on the orders of King Herod when he was trying to kill the baby Jesus.

It's traditional to eat a special cake called 'Rosca de Reyes' (Three Kings Cake) on Epiphany. A figure of Baby Jesus is hidden inside the cake. Whoever has the baby Jesus in their piece of cake is the 'Godparent' of Jesus for that year.

Another important day, is La Candelaria 'the Candles' or Virgen de la Candelaria 'Virgin of Lights or Candles' (this is also known as Candlemas in other countries around the world) on the 2nd February and it marks the end of the Mexican Christmas celebrations. Lots of Mexicans have a party for Candelaria.

In Mexico most people speak Spanish (Español), so Happy/Merry Christmas is 'Feliz Navidad'. In the Nahuatl (spoken in some parts of central Mexico) it's 'Cualli netlācatilizpan' and in the Yucatec Maya language (spoken in some parts of the Yucatán Peninsula) it's 'Ki'imak "navidad"'. Happy/Merry Christmas in lots more languages.

The largest ever Angel Ornament was made in Mexico. It was made in January 2001 by Sergio Rodriguez in the town of Zozaya in the state of Nuevo León. The angel was 18' 3"" high and had wing span of 11' 9"! Perhaps the most amazing thing about the angel was that it was completely made out of old beer bottles, 2946 of them!