During the evening of the 5th December (St. Nicholas Eve), children are very excited and watch for St. Nicholas (Svatý Mikuláš) to arrive. He normally is accompanied by one or more angels and one or more devils. He asks the children if they've been good all year and also asks them to sing a song or recite a poem, and gives them a basket of presents, often containing chocolate and fruit. If you've been naughty, the devil might give you a lump of coal. Like in the The Netherlands and some other European countries, St Nicholas' Day is a very separate holiday than Christmas. 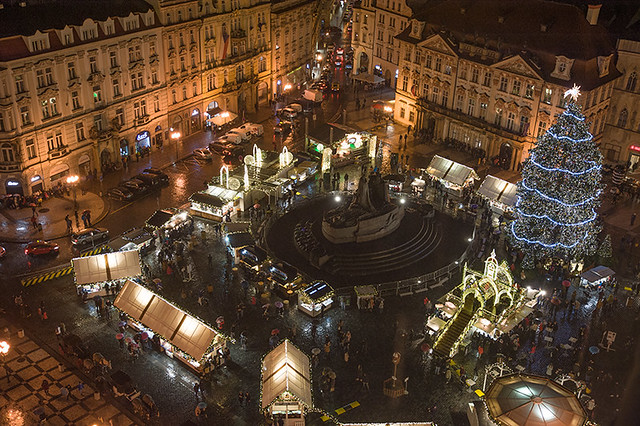 The main Christmas celebrations are on Christmas Eve. Some people fast during Christmas Eve in the hope that they will see a vision of 'the golden pig' appear on the wall before dinner! This is meant to be a sign of good luck!

The Czech traditional Christmas dinner is eaten during the evening of Christmas Eve. The meal often consists of fish soup (made of carp), and fried carp with potato salad.

There are some superstitions which some Czech families have surrounding the Christmas. Here are a selection of them:

Ježíšek 'Little Jesus' (the Czech version of Christkind) brings presents during the Christmas Eve dinner and leaves them under the Christmas Tree. Czech children have their dinner in a different from where the tree is located. When they hear the bell ring (usually after the children have finished eating their main meal but when they are still at the table), that means that Ježíšek had been and has left their presents under the tree. The presents are normally opened right after dinner.

Religious families also usually sing Christmas carols by the tree, and go to church either at midnight or on Christmas Day.