In Egypt about 15% of people are Christians. They are the only part of the population who really celebrate Christmas as a religious festival. Most Egyptian Christians belong to the Coptic Orthodox Church and they have some very unique traditions for Christmas.

Christmas Day isn't celebrated on the 25th December but on 7th January (like in Ethiopia and by some Orthodox Christians in Russia and Serbia).

For the 43 days before Christmas (Advent), from 25th November to 6th January, Coptic Orthodox Christians have a special fast where they basically eat a vegan diet. They don't eat anything containing products that come from animals (including chicken, beef, milk and eggs). This is called 'The Holy Nativity Fast'. But if people are too weak or ill to fast properly they can be excused.

On Coptic Christmas Eve (6th January), Coptic Christians go to church for a special liturgy or Service. The services normally start about 10.30pm but some chapels will be open for people to pray from 10.00pm. Many people meet up with their friends and families in the churches from 9.00pm onwards. The services are normally finished shortly after midnight, but some go onto 4.00am! 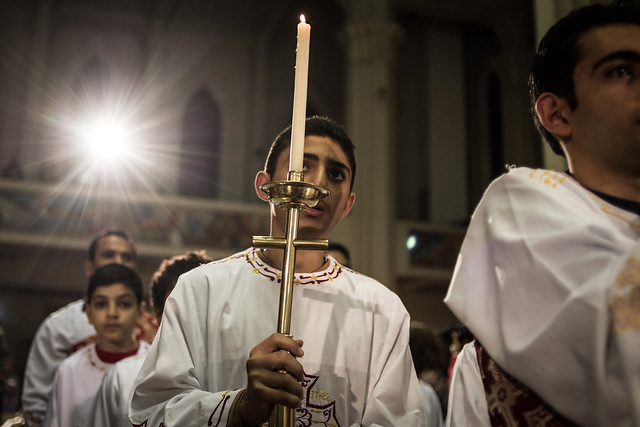 When the Christmas service ends people go home to eat the big Christmas meal. All the foods contain meat, eggs and butter - all the yummy things they didn't during the Advent fast! One popular course if 'Fata' a lamb soup which contains bread, rice, garlic and boiled lamb meat.

On the Orthodox Christmas Day (7th) people come together in homes for parties and festivities. People often take 'kahk' (special sweet biscuits) with them to give as gifts.

Even though not many in Egypt are Christians, a lot of people in the country like to celebrate Christmas as a secular holiday. Christmas is becoming very commercial and most major supermarkets sell Christmas trees, Christmas food and decorations. Hotels, parks and streets are decorated for Christmas.

In Egypt, Santa is called Baba Noël (meaning Father Christmas). Children hope that he will climb through a window and will leave some presents! They might leave some kahk out for Baba Noël.