As in The Netherlands, children in Belgium believe that 'Sinterklaas/St. Niklaas' (Flemish) or 'Saint Nicholas' (Walloon) brings them presents on December 5th and 6th, St. Nicholas' Eve and St. Nicholas' Day.

Children put their shoes in front of the fireplace, together something for Sinterklaas like a drawing or biscuits; they might also leave a carrot for Sinterklass's horse and something for Zwarte Piet/Sooty Piet/Roetpiet (Black Peter/Sooty Peter/Chimney Peter, Sinterklass's assistant). Then in the night, Sinterklaas arrives on the roof on his horse with Piet. Piet climbs down the chimney and leaves the presents in and around the shoes. Sinterklaas has a book in which he keeps all the names of the children and it tells if they've been bad or good. Children are told that if they've been bad, Piet will put you in his sack and take you back to Spain! Traditional foods that are left for Sinterklaas include tangerines, gingerbread, chocolate and 'mokjes' (cookies made in the shapes of letters. There are lots of songs that children sing about Sinterklaas. Different regions of Belgium have different customs and traditions about St. Nicholas.

The visit of Sinkerlass is a separate occasion to Christmas. Christmas is a more religious festival.

In Belgium there are three official languages, Dutch (a Belgium version of Dutch is known as Flemish, this is mainly spoken in the northern area of Belgium called Flanders), French (mainly spoken in the southern Walloon Region) and German (spoken by about 1% of Belgiums in the east of the country).

On Christmas Eve ('Kerstavond' in Flemish and 'le réveillion de Noël' in Walloon), a special meal is eaten by most families. It starts with a drink (apéritif) and 'nibbles', followed by a starter course such as sea-food, and then stuffed turkey. The dessert is 'Kerststronk' (Flemish) or 'la bûche de Noël' (Walloon) a chocolate Christmas Log made of sponge roll layered with cream. The outside is covered with chocolate butter cream and made to resemble a bark-covered log.

Some people celebrate Advent and have Advent Wreaths/Crowns made from fir or leylandii greenery. The wreaths have four candles and a candle is lit each week counting down to Christmas. These are very popular in Elementary/Primary Schools where an Advent song is sung when the candles are lit. Lots of children also have paper Advent Calendars with chocolate behind the doors for each day!

In the weeks before Christmas, people also like to go to Christmas Markets. You might spot Santa Claus at the market! People go to buy Christmas presents, decorations and food. You can also drink jenever (gin) or Glühwein (hot wine) and eat some Smoutebollen/oliebollen (deep fried sweet dumplings) are also very popular. Going ice skating with friends is also something which is very common. 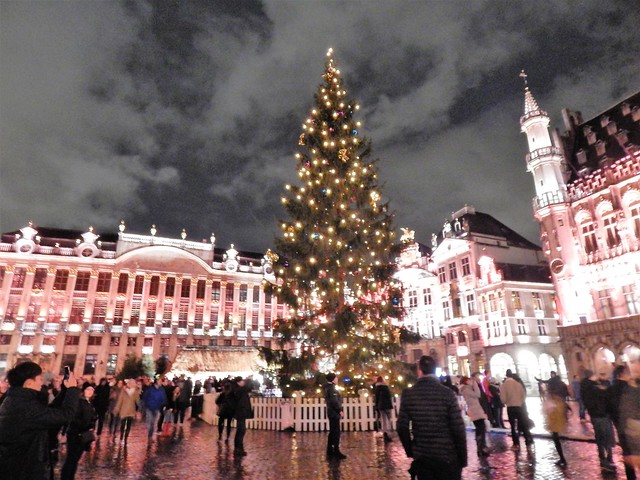 At Christmas parties at schools, it's common to buy a small gift which can be for anyone. A game is played to give out the presents. A very popular one is putting on some music and passing the parcel around everyone sitting in a circle. When the music stops, the one who holds the parcel, gets to keep the present. That's why the present should be something that anyone would like!

Most people will have a Christmas Tree (real or fake!) decorated with lights, baubles, garlands and a star on the top.

Next to the tree, many people will have a nativity scene. Some people even have a life-size one in their gardens! In most villages, there are big 'real' scenes next to the church with real animals (donkey, sheep, ox) and non-stop choir music playing. Some people also decorate the outside of their house with lights, or reindeer, or a Santa climbing up the roof (that's very popular).

On Christmas Eve, people normally celebrate with their close family and keep it small and cosy. The main meal is eaten on Christmas Eve. You might start the evening with small things like crisps, mini-pizzas, etc., or have a starter like soup. For the main course popular dishes include game or seafood, but turkey or chicken are also popular. But whatever you have, there's always some potato croquettes! Ice-cream cake is a very popular dessert.

Small family Christmas presents are also given at Christmas too, where they are put under the tree. They are opened on Christmas Eve. People also like to listen to Christmas music on the radio. Some people also go a Midnight Mass service

The traditional Christmas breakfast is the same as the normal Sunday breakfast eaten throughout the year. This is freshly baked crusty rolls (bakeries do their best trade on Sundays in the Flanders region) with butter & cold meats and/or jam, followed by pastries (like Danish pastries) called 'koffiekoek(en)' (meaning coffee cake(s) as they are normal eaten with a cup of coffee!). In Walloon districts (the south of Belgium), a special sweet bread called 'cougnou' or 'cougnolle' made in a shape that is supposed to be like baby Jesus is eaten for Christmas breakfast.

On Christmas day itself people visit friends or distant relatives.

Movies like Home Alone! and Disney films are always shown on the TV as is the Phantom of the Opera.

New Year's Eve and New Year are also very big holidays in Belgium. Many families eat another large meal together and sometimes have even more presents! At midnight people countdown to the new year and give everybody 3 kisses and wish them the best for the coming year. Having fireworks is also a very popular way to mark the new year. Some people have parties that last until the next morning!

On New Year's Day, people often visit friends and family. Children (up to about the age of 12) also read their 'New Years letters' for their Mother/Godmother. The letters are written at school and are done in your best handwriting and put in beautiful envelopes.

On the 6th of January, people celebrate Epiphany and the three wise men. Children dress up as the three wise men and go from door to door to sing songs and people give them money or sweets, kind of like Trick or Treating on Halloween. One of the songs goes:

(3 wise men,
give me a new hat,
my old one is worn,
my mother cannot know,
my father has counted the money
on the grid!)

There is also a tradition that people make a 'Three Wise Men Pie' or bread called the 'galette des rois' which is decorated with a gold paper crown on the top. A 'fève' (bean) would be hidden in the pie or bread (now it's often a small plastic figure, although some bakers advertise that 'gold' has been baked in the cake!). Whoever finds the fève would be the king or queen for the day and wears the crown!