Christmas isn't widely celebrated in Iran and it isn't a public holiday. Only 0.15% of people in Iran are Christians. Most Christians in Iran are Armenian immigrants. The Armenian Orthodox Church celebrates Christmas on January 6th along with Epiphany.

Many Armenian Christians live in the Majidieh district in Tehran and in the Jolfa district of Isfahan. Shops in these areas will sell Christmas decorations and items. In Jolfa pine trees are decorated with lights. Vank Cathedral, in Jolfa, has a very important Christmas service on Christmas Eve.

However, it can be dangerous to be a Christian in Iran. Ethnic Persians/Iranians are seen as Muslims. If you leave Islam and become a Christian you can go to prison or be killed. It's also illegal to hold christian church services in Farsi (the main language spoken in Iran).

Although Christmas isn't widely celebrated in Iran, there is another important events which happens around the time of Christmas.

In Iran/Persian culture, the winter solstice (the 21st of December) is known as 'Yalda Night' (Shab-e Yalda) or 'Shab-e Chelleh' and it's a time when families and friends come together to eat, drink and recite poetry. Shab-e Chelleh means 'night of forty' as it happens forty nights into winter.

The word Yalda means 'birth' and comes from when some early Christians, who lived in Persia at the time, celebrated the birth of Jesus around the time of the winter solstice.

Eating, fruits, nuts, pomegranates and watermelons are important at Yalda/Chelleh and you can get Yalda cakes which look like watermelons!

Pomegranates and watermelons are eaten because they are red and this color represents the dawn rising after the shortest day of the year. Often foods on Yalda are eaten around a low table called a 'korsi'. In some parts of Iran it's a tradition that 40 different types of food and fruit should be served and eaten! 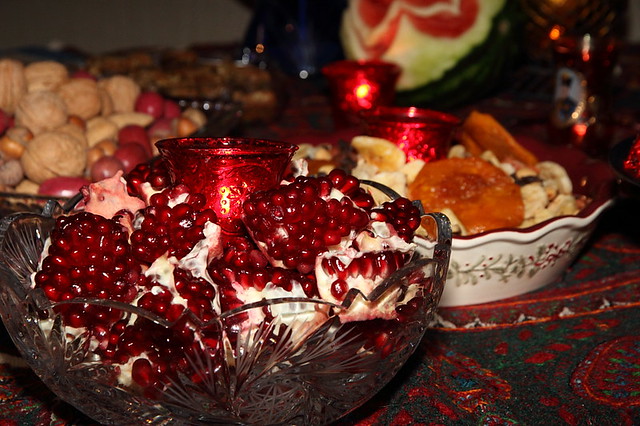 After the meal people read poetry, often that of a famous Persian poet called Divan-e Hafez, and tell each other stories. The story telling and poetry can go on until dawn.