Christmas is often known as 'Jól' (Yule) in Iceland. This comes from the ancient winter solstice celebrations, that were taken over by the early Christians. Jól also include the New Year celebrations.

There are lots of customs and traditions about Jól in Iceland. The Jól season consists of the following days:

Þorláksmessa - St. Thorlakur's Day - December 23rd
Iceland's major Saint is 'heilagur Þorlákur Þórhallsson', or 'St. Thorlakur Thorhallsson', the Bishop of Skálholt. December 23rd, is the day on which he died. On St. Thorlakur's Day, the main custom is eating of a simple meal of skata or skate. The Jól (or Christmas) tree is usually decorated on this day. This is also a big shopping day for last minute gifts, with stores remaining open until midnight.

Aðfangadagur - Christmas Eve / Jól Eve
Celebrations start at Iceland at 6.00pm on Jól Eve. This may have come from old Icelandic tradition, when a new day started at 6.00pm not midnight. Icelandic children open their presents after the evening meal on Aðfangadagur. This is when the Jól celebrations really start! (TV used to stop at about 5.00pm and restarted at 10.00pm! But now TV is on all through the Christmas period.)

Jóladagur - Christmas Day / Jól Day
Jóladagur is usually celebrated with the extended family. The main Jól meal is 'Hangikjöt', a leg of roast lamb. Sometimes 'Rjúpa' (Rock Ptarmigan a gamebird) is also eaten. Another Jól meal speciality is 'Laufabrauð' or leaf bread. This is made of thin sheets of dough cut into delicate patterns and fried. Each family often has their own patterns for the Laufabrauð.

Annar Jóladagur - Boxing Day
This is another day for visiting friends and family and eating lots more! Public entertainment is considered inappropriate on Jól Eve and Jól Day, and it is on Boxing Day that dancing is again allowed in public!

Gamlárskvöld / Nýársdagur - New Year's Eve / New Year's Day
This is one of the most important nights of the year in Iceland and there are several magical traditions that are supposed to happen on it! Cows are meant to be able to talk, seals take on human form, the dead rise from their graves, and the Elves move house. 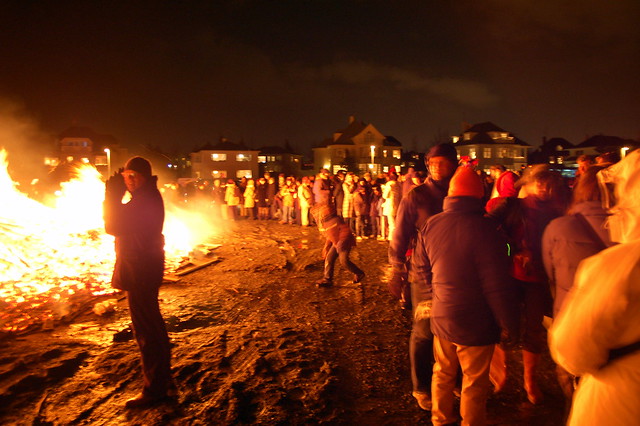 Bonfires have been lit on Gamlárskvöld since the late 1700s. People also have big fireworks displays to bring in the New Year. This is called 'sprengja út árið' or 'blowing out the year'.

Þrettándinn - Epiphany - January 6th
This is the last day of Jól, celebrated with bonfires and Elfin dances. Many of the magical traditions associated with New Year's Eve are also supposed to happen at Þrettándinn.

One other big Jól custom is the coming of the 'Jólasveinarnir' or Jóltide Lads. These are magical people who come from the mountains in Iceland and each day from December 12th to Jól Eve a different Jólasveinn (Jóltide lad) comes.

Jólasveinar first came to Iceland in the 17th century as the sons of Grýla and Leppalúði, a couple of child-eating, bloodthirsty ogres!!!

Here are thirteen of the most common names of the Jólasveinar:

The Jólasveinar are thought of as playful imps or elves who like lots to eat and playing little tricks on people.

They leave little presents for children in shoes placed on the windowsill. If children have been naughty, they might leave a potato or little message telling them to be good. They start going home on Christmas Day, with the last one leaving on Þrettándinn.

Presents might also be brought by Jólasveinn (Jól Man).

It is traditional in Iceland that everybody has a new piece of clothing for Jól and also often a book. The custom of giving books at Christmas in Iceland is called 'Jolabokaflod' or 'Jólabókaflóð' which translates as 'Christmas flood of books'! It started during WWII when books weren't rationed and many other things were, so books made really good gifts. On Christmas Eve many people in Iceland will open a new book as a gift, and read it with a cup of hot chocolate or Jolabland (an Icelandic drink made of fizzy orange soda and brown ale/beer).

One traditional story is that the Christmas cat will eat you unless you wear one piece of new clothing on Christmas day! Children also traditionally receive a candle and sometimes a pack of cards.

There are no native evergreen trees in Iceland, so the first Jól or Christmas Trees were Rowan (mountain ash). The first recorded Jól tree was in 1862. People then started to make Jól Trees from a central pole with branches attached to it and it was all painted green.

Nowadays, there are evergreen trees grown on Iceland and people have evergreen Jól trees. It is traditional to have a star or crown on top of the tree. The Icelandic Flag is also commonly used as a decoration. The tree is normally decorated on Þorláksmessa or early Christmas Eve. A very large tree stands outside Reykjavík (the capital of Iceland) Cathedral and is a yearly present from the people of Oslo, Norway.

In Iceland the traditional Christmas meal is roast lamb. Some people like to have it smoked to add flavour and traditionally it was smoked over sheep's dung! This is still done in a few places today!

Like in Finland, cemeteries are often lit up and decorated with Christmas lights over Christmas. 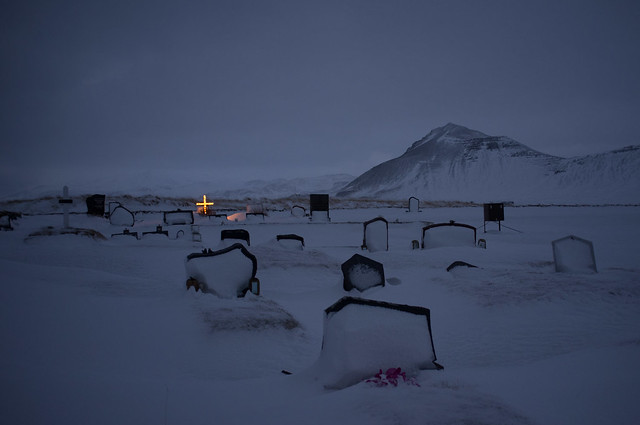