Christmas in The Netherlands

For most children in The Netherlands, the most important day during December is 5th December, when Sinterklaas (St. Nicholas) brings them their presents!

St. Nicholas' Day is on the 6th December, but in The Netherlands, the major celebrations are held on the 5th December, St. Nicholas' Eve. The name Santa Claus comes from the name Sinterklaas.

It all starts on the second Saturday of November (the first Saturday after 11th November) when Sinterklaas travels to a city or town in The Netherlands. Dutch tradition says that St. Nicholas lives in Madrid, Spain and every year he chooses a different harbour to arrive in The Netherlands, so as many children as possible get a chance to see him.

Sinterklass travels with his servants called 'Zwarte Pieten' ('Black Peters') or 'Sooty Pieten'/'Roetpieten' (Sooty or Chimney Peters). When Sinterklaas and the Piets come ashore from the steam boat, all of the local church bells ring in celebration. Sinterklaas, dressed in his red robes, leads a procession through the town, riding a white horse. Every town in The Netherlands has a few Sinterklaas helpers, dressed the same as Sinterklaas and the Piets who help give the presents out. 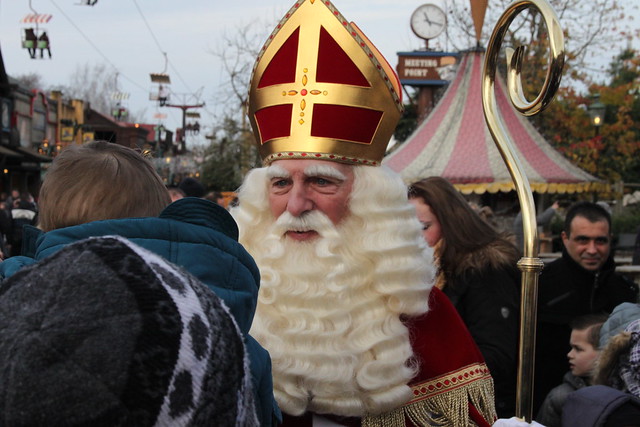 Children are told that the Piets keep a record of all the things they have done in the past year in a big book. Good children will get presents from Sinterklaas, but bad children will be put in a sack and the Piets take them to Spain for a year to teach them how to behave!

On the evening that Sinterklaas arrives in The Netherlands, children leave a shoe out by the fireplace or sometimes a windowsill and sing Sinterklaas songs. They hope that Sinterklaas will come during the night with some presents. They also believe that if they leave some hay and carrots in their shoes for Sinterklaas's horse, they will be left some sweets or small presents. They're told that, during the night, Sinterklaas rides on the roofs on his horse and that a Piet will then climb down the chimney (or through a window) and put the presents and/or candy in their shoes.

In many families the children are told that Sinterklaas and a Piet make a weekly visit, so the children leave their shoe by the fireplace or window i.e. every Saturday until the main Sinterklaas party on 5th December.

Many people now don't like the use of 'Zwarte Piet'; this is because the helpers who dress up as Zwarte Pieten are normally white people who wear black makeup and this is seen as racist. So now you will often see more 'Sooty Piet'/'Roetpiet' where people just have soot and dirt smudges on their face rather than being completely made up with black makeup. You can find out more about the history of Zwarte Pieten on the site of the St Nicholas Center (goes to another site).

The evening of December 5th is called St. Nicholas’ Eve 'Sinterklaasavond' or 'Pakjesavond' (present evening). The children will receive their presents during the evening. There might be a knock at the door and you might find a sack full of presents!

Sinterklaas parties are often held on St. Nicholas' Eve (5th), where treasure hunt games are played with poems and riddles giving the clues. Children follow the clues to find little presents left by Sinterklaas. Special biscuits and sweets are also eaten at the party. One type of biscuit is called 'letter blanket' or 'banketletter' (meaning letter cake), which is made from marzipan or pastry. The biscuits are made in the shapes of the first letter of the peoples names who are at the party. Another sweet biscuit that is eaten at the parties are 'pepernoot' which are made with cinnamon and spices in the pastry biscuit mix. Here's a recipe for peppernoot. And Here's a recipe for kerstkrans, a Dutch Christmas Ring Cake.

On the 6th of December Sinterklaas (St Nicholas' Day, some poeple also say this is the birthday of Sinterklaas - it can be confusing!) leaves The Netherlands by steamboat via the entrance of the port of Rotterdam (Europe’s largest port) called the Hook of Holland and he travels back to Spain. 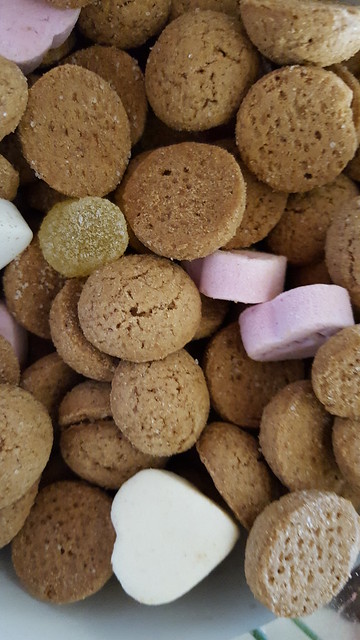 Surprise presents are also given on St. Nicholas' Day. A custom at the Sinterklaas parties, often within classes at schools, is that everyone's name is put into a hat and everyone picks another person's name - then they have to make a surprise present for that person. The presents are often things that the person would find useful with their favorite hobby. The presents come with a poem inside that gives a clue to who might have sent the present, but it is all meant to be a mystery! This is a similar custom to a present sending one in Germany.

Christmas celebrations in The Netherlands are separate from the visit of Sinterklaas!

Christmas Day itself is a much quieter day in The Netherlands, with a Church Service and family meal. Sometimes there is a special Christmas Day 'Sunday School' in the afternoon at the church, where the Christmas Story and other traditional stories are told. These are often the only presents children will get on Christmas Day because they have already received most of their presents on St. Nicholas Day.

Christmas Day is known as 'Eerste Kerstdag' (first Christmas day) and the day after Christmas is called 'Tweede Kerstdag' (second Christmas day). On the second day people tend to visit their families and big shops are also often open on Tweede Kerstdag. The traditional way to eat with the family is called 'gourmetten', which is a little stove that is put on the table and where everyone prepares their own meal while seated.

Many people in The Netherlands also have a Christmas Tree in their houses.