Leading up to Christmas in Guyana, the streets are filled with shoppers looking for gifts. You can also hear the sounds of vehicle horns blaring in slow traffic and the sound of the Masquerade Bands and their music and dancing.

The Masquerade bands are an important part of Christmas in Guyana. People wear very colourful outfits and play instruments like drums and flutes/recorders. They parade through the streets performing their music and dances.

Some people are also dressed as certain characters and these characters have special dance moves. There can be lots of different groups on the streets at the same time. 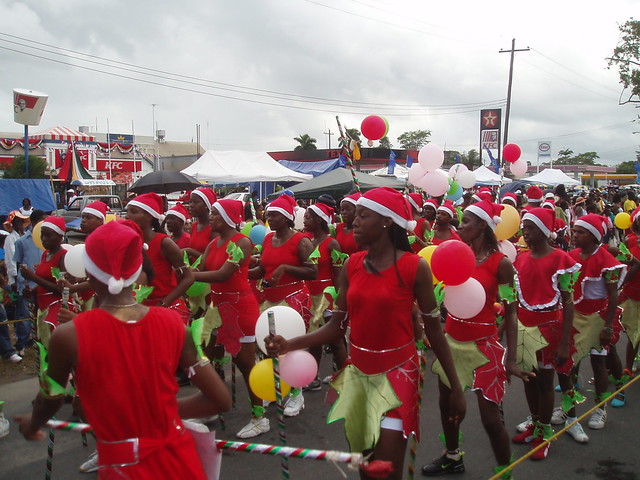 Christmas is a special time for Guyanese both at home and overseas. Many overseas based Guyanese will try and return home to to visit with family and friends. This makes Christmas extra special.

In Guyana, people really like to decorate their houses and streets with lots of lights at Christmas time. Traditionally you didn't put up the decorations until Christmas Eve.

A popular Christmas food in Guyana is Pepperpot. This is a meat stew made with beef, pork or mutton, it is flavoured with cinnamon and a sauce made from cassava root) served with bread. This is sometimes eaten for breakfast at Christmas. This is a national dish from one of the six races of Guyana, the native Amerindians.

Other Christmas foods include baked chicken or turkey, stuffing, garlic pork, homemade pickled onions and cook-up rice (rice cooked with peas/beans, some meat and lots of herbs and spices, this is another national dish from Afro-Guyanese heritage).

There's also black cake, a very rich fruit Christmas cake which includes rum. The fruit for the cake is soaked in wine or rum for months before the cake is made. If you visit a house in Guyana over Christmas you have to “try a lil piece”!

Gifts are often exchanged after breakfast on Christmas day.

The day after Christmas, Boxing Day, is also a national holiday. It's a popular time for games and sports as well as another day for visiting friends and family.

But wherever you are it's a Guyanese tradition to have some on the stove at New Year shows that you won't go hungry through the next year. And having cash in pocket when New Year happens means you'll have money the following year. Some churches will have pots of cook-up rice cooking during the service ready for eating when the service has finished!

There are also fireworks at New Year. The Guyana Defence Force puts on a firework show and this is a vibrant time of the year.