Guatemala is a very diverse country with more than 20 ethnic groups. Each of them has their own special traditions for celebrating Christmas.

On December 7th at 6pm an unusual customs called 'La Quema del Diablo' (The Burning of the Devil) takes place, where an effigy (model) of the devil/Satan burnt. The 8th December is the Feast of the Immaculate Conception, a holy day for Catholics and burning the devil before that is meant to be a way of getting 'bad things' out of the way ready for the new year! The tradition started back when Guatemala was a Spanish colony and people would put lanterns on the front of their houses. But some people had bonfires instead and the custom changed overtime to burning the devil!

Most Guatemalans, like other Latin-American counties, plan and build, with the entire family, a Nativity Scene called a "Nacimiento" or "Belen". Although it is originally a Spanish tradition, many indigenous (Guatemalan) elements are now used in the design and construction of the Nativity scenes. The "Nacimiento" is normally put under the Christmas Tree. One unique characteristic of Guatemalan Nativity scenes is the use of sawdust dyed in many bright colors. 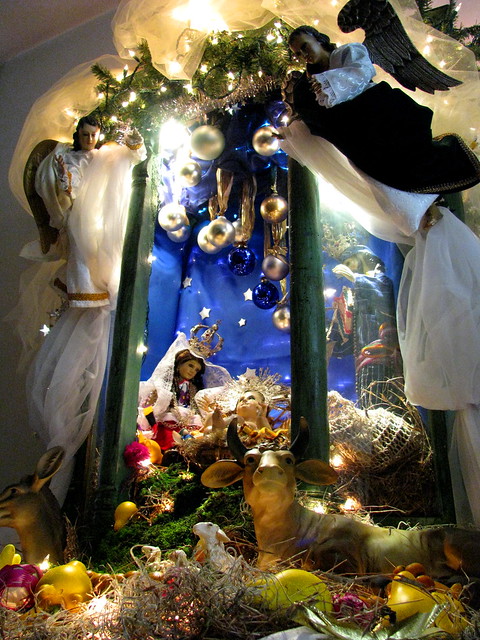 On Christmas Eve families celebrate together and eat the main Christmas meal. It is made of several traditional dishes, but it always includes some Guatemalan tamales. In some regions they are made of corn and other of rice or potatoes. They can be sweet or not, and have several different ingredients inside like olives, prunes, peppers, chicken or pork.

Everyone waits until midnight to light hundreds of fireworks or firecrackers to celebrate the birth of Jesus. A family prayer is said around the tree and it is the custom to open the presents shortly after midnight.