Christmas really isn't celebrated in Turkey. December 25th isn't a public holiday - it's just a normal day! Only 0.2% of the Turkish population are Christians, and many of those are migrants/refugees from countries such as Syria and Iran, etc. Christians in Turkey will go to Christmas services at their churches. Istanbul (formally known as Constantinople) is still an important location for the Greek and Eastern Orthodox Churches as the churches have had a base there for hundreds of years.

Many towns and cities have decorations and light displays and more people are having decorations in their homes, such as Christmas Trees. However, they are more used to celebrate New Year's Eve which is a much bigger celebration in Turkey than Christmas. 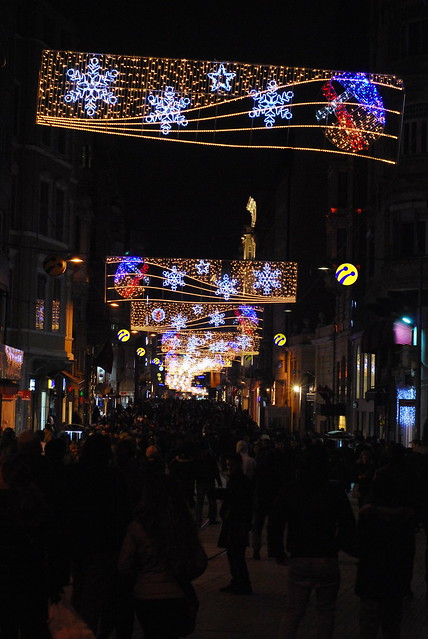 New Year's Eve is known as 'Yılbaşı gecesi' and is one of the biggest holidays in Turkey. Families come to gather and eat a meal together. A popular main dish is Turkey (But in Turkish, Turkeys - the bird - are known as 'Hindi' - which means 'India')!

There are lots of special New Year's Eve TV shows and just before midnight, there's a big national lottery draw on TV. People will also play games after the meal, leading up to midnight. Bingo is a traditional game played on New Year's Eve in Turkey.

At midnight there are large celebrations and lots of big firework displays.

Some people will exchange gifts for the new year. Getting some red underwear is not unusual as it's thought that wearing red underwear at might on New Year's Eve will mean you have a good next year!

Sprinkling salt or your doorstep, turning on the taps, and throwing a pomegranate on the ground are also thought to bring you some good luck! Unlocking a padlock is meant to bring you wealth in the new year.

Turkey does have a big connection to Christmas though, as St Nicholas was born in Myra which is now in south west? Turkey. Santa Claus is known as 'Noel Baba' but he's more likely to bring presents to children on New Year's Eve than at Christmas! (And decorations with Santa on are more likely to have him holding a banner saying 'Happy New Year' rather than 'Merry Christmas'!)