Some people in Denmark give and receive extra Advent presents on the four Sundays of Advent.

Different types of Advent candles and calendars are popular in Denmark. A Kalenderlys (calendar-candle) is an Advent candle and most people have one of these types of candles. A Pakkekalender (gift calendar) is also a fun way to countdown to Christmas Eve. There are 24 small gifts for the children in the calendar, one for each day until Christmas Eve.

Julekalender (christmas calendar) is a television series with 24 episodes. One episode is shown each day in December with the last one being aired on Christmas Eve. The first Julekalender was shown on TV in Denmark in 1962. The two main Danish TV channels DR and TV2 both show different versions of Julekalender each year. The theme of the stories in the Julekalender normally follow a similar storyline, with someone trying to ruin Christmas and the main characters saving Christmas!

As well as the TV series, both DR and TV2 produce paper advent calendars to go along with the stories! DR is the oldest TV channel in Denmark and it's paper calendar is called Børnenes U-landskalender (Children's U-Country Calendar) (goes to another site). It's been making the calendars for over 50 years and profits from the sale of the calendar go to help poor children in a developing country. The calendar made by TV2 is called julekalender and profits from that calendar go to help Julemærkefonden, a children's charity in Denmark.

You can also support Julemærkefonden when you send Christmas Cards in Denmark. Every year a set of Christmas stamps/stickers/seals called julemærket are sold in December to help raise money for the charity. You use a normal postage stamp as well, the julemærket stickers just make the post look more Christmassy! You can out more about julemærket on https://www.julemaerket.dk (goes to another site)

Christmas Parties are held from 1st November to 24th December where everyone has a good time! Making cakes and biscuits is popular in the time before Christmas. Gingerbread cookies and vanilla ones are often favorites.

Like in Sweden, the 1958 Disney special "From All of Us to All of You" is shown on the TV in the afternoon on Christmas Eve. 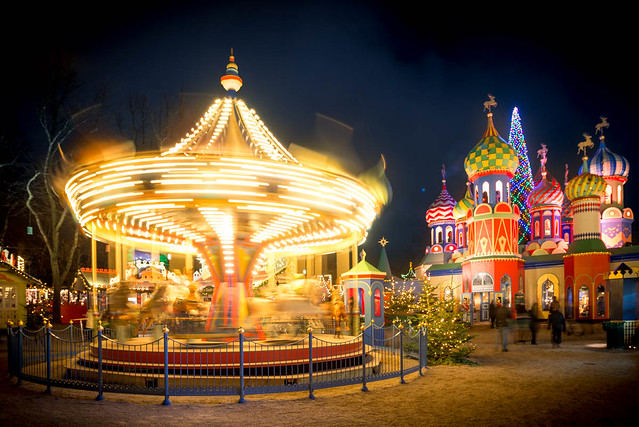 When they get home the main Christmas meal is eaten between 6.00pm and 8.00pm. It's served on a beautifully decorated table. Popular Christmas foods include roast duck, goose or pork. Juleand is a Christmas roast goose or duck stuffed with apples, prunes and herbs. A gravy which has vermouth is often poured over the Juleand. It's served with boiled and sweet potatoes (brunede kartofler or browned/caramelized potatoes), red cabbage, beetroot and cranberry jam/sauce.

Most families have a 'ris á la mande' (a special kind of rice pudding, made of milk, rice, vanilla, almonds and whipped cream) for dessert. All but one of the almonds are chopped into pieces. The person who finds the whole almond gets a present called a Mandelgave (almond present). Traditionally the little present was a marzipan pig! Now a marzipan pig is still sometimes given, but it's also often something like sweets or a little toy.

After the meal the lights on the Christmas Tree are lit, people might dance around the tree and sing carols. Then it's time for people to open their presents. The Christmas tree normally has a gold or silver star on the top and often has silver 'fairy hair' on it to make it glitter.

On Christmas day people meet with their family and have a big lunch together with danish open-faced sandwiches on rye-bread.

In Denmark, children believe that their presents are brought by the 'Julemanden' (which means 'Christmas Man' or 'Yule Man'). He looks very similar to Santa Claus and also travels with a sleigh and reindeer. He lives in Greenland, likes rice pudding and is helped by 'nisser' which are like elves.

St. Lucia's Day (or St. Lucy's Day) is also celebrated on December 13th, although it's more famous for being celebrated in Denmark's neighbor, Sweden.