In Croatia, preparations for Christmas start on 25th November which is St Catherine's day. People also celebrate Advent. Over 85% of people in Croatia are Catholics so Advent is an important time for them.

It's traditional to have an Advent wreath made of straw or evergreen twigs which has four candles. The wreath symbolizes endlessness and the four candles symbolize different parts of history and life:

A fifth candle is sometimes added in the center which is lit on Christmas Day! You can buy wreaths, but many people like to make them. People also often have a paper Advent Calendar.

On St Nicholas's Eve (5th), children clean their shoes/boots and leave them in the window. They hope that St Nicholas will leave them chocolates and small presents in their boot. If children have been naughty, Krampus (a big monster with horns who sometimes travels with St Nicholas!) leaves them golden twigs to remind them to behave. 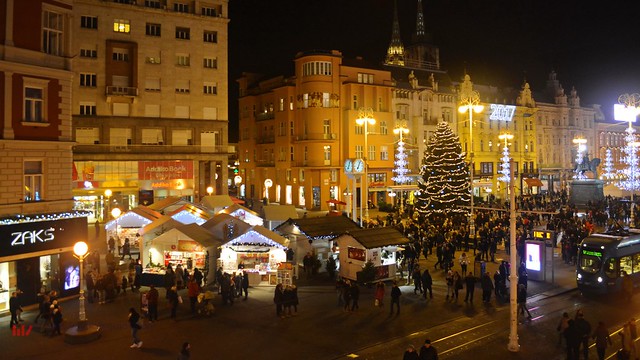 Christmas Trees are very popular and are normally decorated on Christmas Eve but some people put them up and decorate them on St Nicholas's Day. In Croatia they're traditionally decorated with ornaments in the shapes of fruits. They used to be real fruits or persevered candied fruits that were sometimes covered in gold!

There's an old Croatian tradition that young men gave their girlfriends a decorated apple at Christmas.

Presents are normally exchanged on Christmas Eve or Christmas Day. Many people like to go to a Midnight Mass service.

Christmas Eve and Christmas Day are mostly celebrated with close family. On Boxing day friends and extended family visit each other.

On Christmas Eve, most people eat dried-cod called 'bakalar' or some other kind of fish as it's considered as meat fast (so you can't eat meat).

The main Christmas Day is often turkey, goose or duck. A popular side dish is sarma (cabbage rolls filled with minced pork meat).

There's also always lots of small cookies and cakes to eat with donuts being very popular! There's 'Krafne' which are filled with jam, jelly, marmalade or chocolate and also 'fritule' which are flavored with lemon and rum.