Christmas in Malaysia is mainly a commercial and secular holiday. Christians only make up about 10% of the population, so most people in Malaysia only think of Christmas as a fun time with parties, decorations in stores and public places and presents.

Shopping malls try to out do each other by having the biggest and most impressive decorations and large Christmas displays. These include lots of lights, Santas, reindeer, fake snow (it's very hot in Malaysia so you won't see any real snow!) and huge Christmas trees. Sometimes the trees can be multiple stories high! Some malls will also have attractions like indoor ice rinks and carol singers. 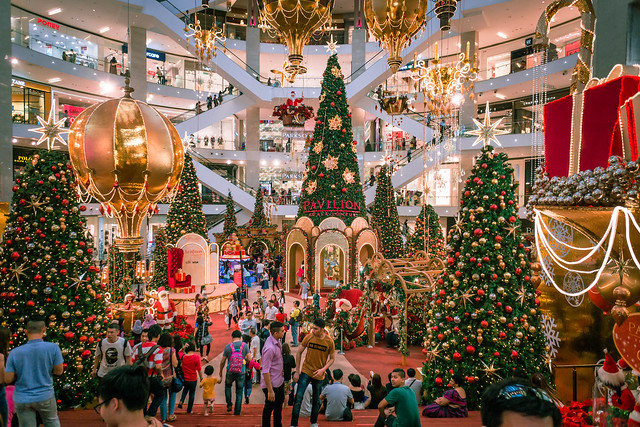 But as soon as Christmas day has finished the decorations are all taken down as soon as possible. The malls then get the New Year's decorations ready!

Restaurants often have special Christmas menus. Christmas Eve is the big day for going to restaurants, having Christmas parties and celebrating Christmas. Having roast or fried chicken is the most popular Christmas dish in Malaysia. But people will also eat whatever they like.

As well as giving gifts, many Malaysians give and receive money in red packets known as 'Ang Paus'. There are normally sales in shops around Christmas and the new year, so they like to spend their Ang Paus after Christmas in the sales!

At Midnight on Christmas Eve, there are huge firework displays. They are normally organised in towns and cities and people like to go and watch the fireworks after their Christmas meal.

Christians in Malaysia will go to a church service, either a Midnight Mass service on Christmas Eve or a service on the morning of Christmas Day.