Many Brazilian Christmas traditions come from Portugal as Portugal ruled Brazil for many years. Nativity Scenes, known as Presépio are very popular. They are set-up in churches and homes all through December.

Christmas plays called 'Os Pastores' (The Shepherds), like the plays in Mexico, are also popular. In the Brazilian versions of the play, there's also traditionally a shepherdess and also a woman who tries to steal the baby Jesus!

Most people, especially Catholics, will go to a Midnight Mass service or Missa do Galo (Mass of the Roster). The mass normally finishes about 1.00am. On Christmas day, people might go to church again, but this time the services are often in the afternoon.

After the Missa do Gallo there are often big firework displays and in big towns and cities there are big Christmas Tree shaped displays of electric lights. 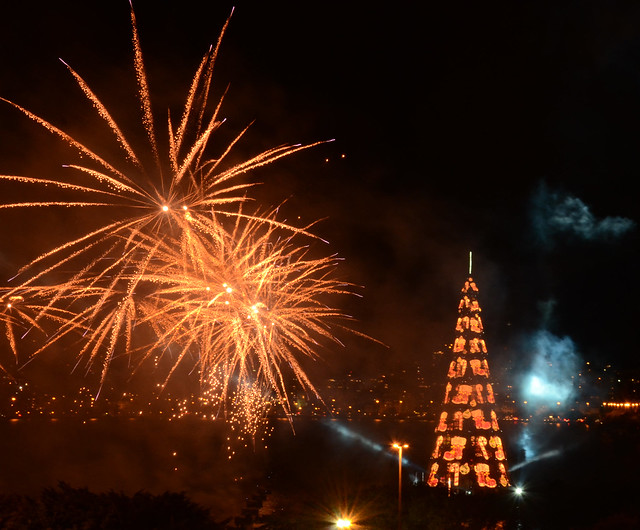 Many Christmas customs are similar to ones in the USA or UK even though it's summer and very hot at Christmas time in Brazil. Many people like to go to the beach.

Sometimes children leave a sock near a window. If Papai Noel finds your sock, he'll exchange it for a present!

Taking part in a 'Secret Santa', known as 'amigo secreto' (secret friend) is popular in Brazil at Christmas. It is traditional to give small gifts all through December using a pretend name (apelidos). On Christmas Day, people reveal who their amigo secreto was!

The most popular Christmas song in Brazil is 'Noite Feliz' (Silent Night).

It's common in Brazil to get a '13th salary' at the end of the year – i.e. in December you get twice the normal amount of pay for that month! The idea is to help boost the economy around Christmas. This has been going on for decades and most people don’t even question that other countries might not do it!

Favourite Christmas foods in Brazil include pork, turkey, ham, salads and fresh and dried fruits. Everything is served with rice cooked with raisins and a good spoon of "farofa" (seasoned manioc flour.) Popular Christmas desserts include tropical and ice cream.

Brazils population is a mix of many different cultures and people that originally came from different countries, so you may have Italian Panettone in São Paulo, Portuguese salted Cod in Rio de Janeiro and some African style food in the states of North-East Brazil.

The meal is normally be served around 10pm on Christmas Eve and exactly at Midnight people greet each other, make a toast wishing everyone a Happy Christmas and after that they will exchange presents. The lunch on Christmas day is also special and after that some people go to relatives and friends houses to visit.