In Slovenia, Advent is the start of the Christmas season. Traditionally some people would fast (not eat certain foods) during Advent.

Advent wreaths are still popular decorations, along with Christmas Trees (or New Year Trees) and Nativity Scenes. The first Nativity scene in a church in Slovenia was created in 1644 by the Jesuits. There's a famous live Nativity scene which is put on every year in the Postojna Cave near Kranjska Gora.

The main Christmas meal is eaten during the evening of Christmas Eve. The most popular dish is roast pork or other pork dishes, although in some areas codfish is a traditional Christmas meal. Some people say it's bad luck to have chicken at Christmas. This is because pigs moves forward to eat, while chickens scratch backwards!

There's a special kind of cake eaten in Slovenia at Christmas called 'potica'. The name comes from the word 'povitica' which means 'rolled cake'. The cake has a swirled filling in made with honey, nuts, raisins and poppy seeds. Different areas of the country have different traditional fillings for their potica. 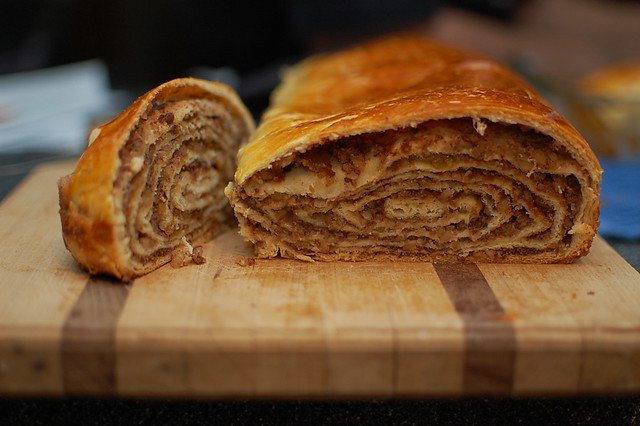 Christmas fruit breads are also an important part of the meal. The breads have different shapes, fillings and names throughout the country.

It was traditional to have breads on the table from Christmas Eve to Epiphany. Also, often three special small rolls were made and they were eaten on Christmas Eve, New Year's Eve and Epiphany (6th January). In some areas, the loafs are decorated with Nativity scenes and animals made of dough.

On the feasts of St Barbara (8th December) or St Lucy/Lucia (12th December) there's an old custom of planting wheat grass seed so they sprout by Christmas and can be used as a table decoration. The sprouting seeds symbolise prosperity.

Children in Slovenia might be fortunate enough to be visited by three gift bringers called the 'Three Good Men' (tri dobri možje) during December!

First there's Sveti Miklavž (St Nicholas) who visits on the 5th December, St Nicholas Eve (called Miklavževanje in Slovenia). There's a famous procession for Sveti Miklavž every year on 5th December in Ljubljana. Miklavž is accompanied by 'angels' (who help him to give out small gifts) and also 'the trotters' (who scare children who have been bad!). Children leave out shoes or stockings on the night of the 5th and hope Miklavž will leave them some presents.

On Christmas Eve Božicek (Santa Claus) might pay you a visit! And on New Year's Eve Dedek Mraz (Grandfather Frost) could leave you some presents. You can see Dedek Mraz riding in a carriage, pulled by horses, through Ljubljana between the 26th and 30th December.

When Slovenia was under communist rule, after WWII, Sveti Miklavž and Božicek weren't very popular, so Dedek Mraz became the main gift giver. He wears a long white sheepskin coat, which is decorated with traditional Slovenian flowers, as well as a fur hat.

But now the Three Good Men are all seen over the Christmas and New Year period.