In Eritrea, like in its neighbour Ethiopia, Christmas is celebrated on January 7th, rather than December 25th. This is because the Eritrean Orthodox Tewahedo Church uses the Geez Calendar that is somewhat similar to the Julian Calendar followed by Eastern Orthodox Church.

About half the population of Eritrea are Christians and the other half are muslims. The main churches in Eritrea are the Eastern Orthodox Church, the Eritrean Catholic Church and the Evangelical Lutheran Church. These are the only types of church which are allowed by the Eritrean government. If you're a Christian who belongs to a different type of church, it can actually be very dangerous, as the government controls which types of churches are allowed.

Many Christmas customs and traditions in Eritrea are similar to those in Ethiopia. This includes people in the Eritrean Orthodox Tewahedo Church taking part in a special fast during Advent, leading up to Christmas. The fast starts on the 25th November and only a vegan diet is eaten.

A day or two before Christmas, people start preparing their big Christmas meal. Often the animal, which will be eaten at the meal, is purchased from a local street market. These include, sheep, goats, cows or hens. People usually check an animal before purchasing it, to make sure it will have enough meat on it! The prices are normally bartered and making a deal can be a long process. The market is also buzzing with people chatting and doing last-minute grocery shopping for the holiday.

On Christmas Eve, the animal is killed. People will also do other final preparations for the meal. These include brewing Swa (a homemade beer), baking Injera (a fermented flatbread made of Taff flour) and cooking Zigni (a hot meat stew, often made with beef). Every family member will help at some point.

Many people will go to a Church service for Christmas. These can start during the evening of Christmas Eve or early in the morning on Christmas Day.

In the Eritrean Orthodox Tewahedo Church, people dress in the traditional white outfits. In the church, men sit on one side of the aisle and women on the other. Women wear head coverings as this is traditional. At the front of the church will be the priest in his gold robe, accompanied by five helpers with white veils wrapped around their shoulders. The service consists of a liturgy and listening to Bible verses in Geez (the traditional language used in the Eritrean Orthodox Tewahedo Church). 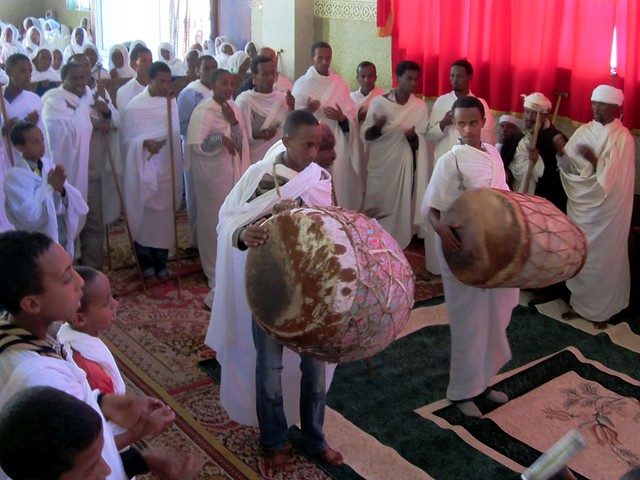 After the church service, everybody goes back to their homes. Green straw (Setti) is spread on the floor and sometimes a soothing incense smoke fills the room. Men are given a glass of the home brewed beer and entertain guests while the women prepare the food. Children are told to sit down and not to get their new or newly washed clothes dirty. But often the children just want to play outside with their friends!

When the meal is ready, a prayer is said by the father, the eldest or a senior member of the family and then everyone can spread his fingers and enjoy eating the delicious zigni with the injera (the bread is used to scoop up and eat the stew). 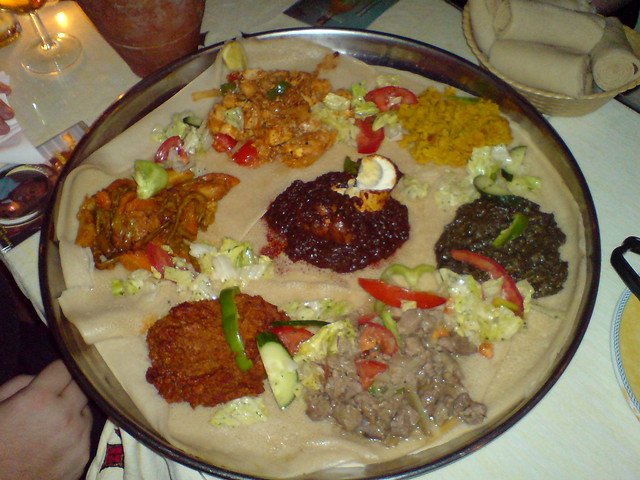