In Ireland, people celebrate Christmas in much the same way as people in the UK and the USA, but they also have many of their own Christmas traditions and customs. 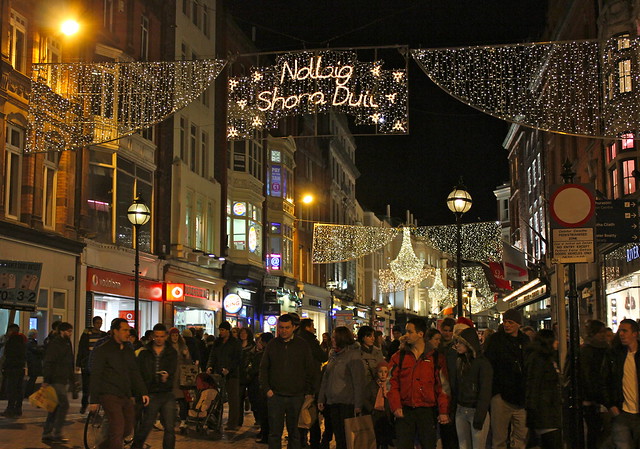 Christmas for Irish people, who are Catholics, lasts from Christmas Eve to the feast of Epiphany on January 6th, which some Irish people call 'Little Christmas'. Epiphany isn't now widely celebrated in Ireland.

In Ireland, many people will put up their decorations, including the Christmas tree, on December 8th, which is the Feast of the Immaculate Conception.

There is an old tradition that in some Irish houses (although now not many), people put a tall, thick candle on the sill of the largest window after sunset on Christmas Eve. The candle is left to burn all night and represents a welcoming light for Mary and Joseph.

Children hope that Santa will visit on Christmas Eve and leave presents for them.

The day after Christmas Day, St. Stephen's Day (known as Boxing Day in the UK and some other countries), is also very important in Ireland. Like in the UK, football matches and horse racing meetings are traditionally held on St. Stephen's Day.

One very old tradition is the Wren Boys Procession that takes place on St. Stephen's Day.

This goes back to ancient times when a real wren was killed and carried around in a holly bush. Some processions still take place, but no wren is hunted or used.

Young men and women dress up in home made costumes and go from house to house carrying a long pole with a holly bush tied to its top and singing a rhyme about a wren bird. Sometimes they are accompanied of violins, accordions, harmonicas and horns.
The rhyme that is often used is:
'The wren, the wren, the king of all birds
On St. Stephen's day was caught in the furze.'

People also ask for money 'for the starving wren'!

The wren is one of the smallest birds in the UK and Ireland, but has a very loud song and is sometimes called the 'king of all birds'. This is because of the legend of a little wren who rode on the top of an eagle's head and boasted he had 'flown higher than an eagle'. Wren's were hunted for many years throughout Europe in medieval times.

The Wren Boys Procession mostly died out in the early 20th century, although it still takes place in some towns including Dingle, in Country Kerry in the South West of Ireland.

The Feast of the Epiphany (January 6th) was also celebrated in some towns in Ireland as 'Nollaig na mBean' or Women's Christmas. Traditionally the women got the day off and the men do the housework and cooking! The women met in each other's homes to sew and chat. Although it's mostly died out, some women still like to get together on the Sunday nearest Epiphany, to have tea and cakes, to gossip and to enjoy each other's company!

Traditional, historic, Christmas food in Ireland include a round cake, full of caraway seeds. One is traditionally made for each person in the house. Now it's more common to have a Christmas Cake like those in the UK, a rich fruit cake covered with marzipan and decorated with icing.

And an addition to turkey for Christmas dinner, sometimes spiced beef (spiced over several days, cooked, and then pressed) is eaten. This can be served hot or cold. Dessert is commonly a Christmas Pudding.