Most people in Spain go to Midnight Mass or 'La Misa Del Gallo' (The Mass of the Rooster). It is called this because a rooster is supposed to have crowed the night that Jesus was born. Christmas Eve is known as Nochebuena. In the days before Nochebuena, children might take part in 'piden el aguinaldo' where they go and sing carols around their neighbors hoping to get some money!

Most families eat their main Christmas meal on Christmas Eve before the service. The traditional Spanish Christmas dinner was 'Pavo Trufado de Navidad' which is Turkey stuffed with truffles (the mushrooms, not the chocolate ones!) or 'Pularda asada' (a roasted young hen), although they are not commonly eaten now. In Galicia (a region in north-west Spain, surrounded by water) the most popular meal for Christmas Eve and for Christmas Day is seafood. This can be all kinds of different seafood, from shellfish and mollusks, to lobster and small edible crabs.

Popular desserts and sweets include 'mazapán' (made of almonds, sugar and eggs), 'turrón' (made of honey and toasted almonds) and 'polvorones' (made of flour, butter and sugar).

After the midnight service, one old tradition was for people to walk through the streets carrying torches, playing guitars and beating on tambourines and drums. One Spanish saying is 'Esta noche es Noche-Buena, Y no Es noche de dormir' which means 'Tonight is the good night and it is not meant for sleeping!'

December 28th is 'Día de los santos inocentes' or 'Day of the Innocent Saints' and is very like April Fools Day in the UK and USA. People try to trick each other into believing silly stories and jokes. Newspapers and TV stations also run silly stories. If you trick someone, you can call them 'Inocente, inocente' which means 'innocent, innocent'. 28th December is when people all over the world remember the babies that were killed on the orders of King Herod when he was trying to kill the baby Jesus.

New Year's Eve is called 'Nochevieja' or 'The Old Night' in Spain and one special tradition is that you eat 12 grapes with the 12 strokes of the clock at Midnight! Each grape represents a month of the coming year, so if you eat the twelve grapes, you are said to be lucky in the new year.

Apart from Christmas, there is another festival that is celebrated in Spain that is about the Christmas Story. It is called Epiphany and is celebrated on 6th January. In Spanish, Epiphany is called 'Fiesta de Los tres Reyes Magos': in English this means 'The festival of the three Magic Kings'. Epiphany celebrates when the Kings or Wise men brought gifts to the baby Jesus.

Children have some presents on Christmas Day, but most are opened at Epiphany. Children believe that the Kings bring presents to them at Epiphany. They write letters to the Kings asking for toys and presents. And on Epiphany Eve (January 5th) they leave shoes on windowsills or balconies or under the Christmas Tree to be filled with presents. Gifts are often left by children for the Kings, a glass of Cognac for each King, a satsuma and some walnuts. Sometimes a bucket of water is left for the camels that bring the Kings! If the children have been bad, the Kings might leave pieces of coal made out of sugar in the presents!

Some big towns and cities have Epiphany Parades with each King having a big float that is shaped like a camel. Sometimes there are also real camels in the parade. Often the Kings (Wise Men) throw out candy to the children watching the parade. The Three Kings in the Spanish Epiphany are:

Christmas in the Basque Country

In the Basque country (which is a part of northern Spain and southern France), on Christmas Eve, children's presents are delivered by a magical man called Olentzero. He's a big, overweight man wearing a beret and smoking a pipe. He dresses like a Basque farmer.

In the Catalonia region of Spain there's a Christmas character called 'Tió de Nadal' (the Christmas log) or he's sometimes known as 'Caga tió' (the pooping log!). It's a small hollow log propped up on two legs with a smiling face painted on one end. From the 8th December (the Feast of the Immaculate Conception) Catalan families give the log a few morsels of food to 'eat' and a blanket to keep it warm. On Christmas Day or Christmas Eve, the log then 'gives out' small gifts! People sing a special song and hit the log with sticks to help its 'digestion' and the log drops sweets, nuts, and dried fruits. When garlic or an onion falls out of the log, all of the treats are finished for the year. The Caga tió is also found in many home is the Aragon region where it's known as 'Tizón de Nadal'. 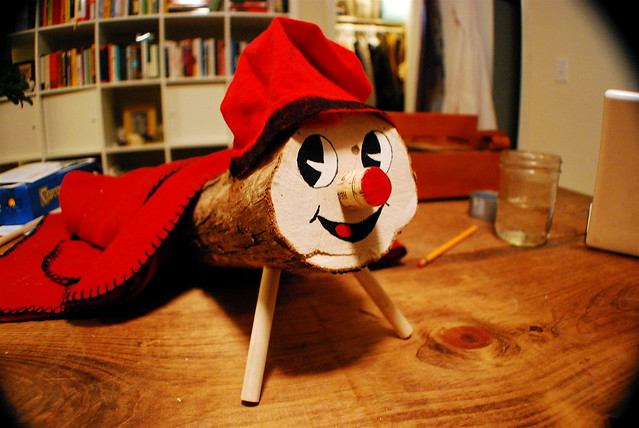 Nativity Scenes 'Pesebres' are also popular in Catalonia (and all throughout Spain!). Many towns also hold 'Pastorets' which are big plays/presentations about the Christmas story, the birth of Jesus. They have lots of music and readings from the Bible. You can find out more about Pastorets on the Pastoret Society of Catalunya's website (goes to another site).

An unusual figure which is popular and traditional in Pesebres in Catalonia is 'El Caganer' which means 'the poo-er'! And yes, it's a figure of a person going to the toilet! It's normally a figure of a Catalan peasant, wearing the traditional red Catalan cap (called a barretina) squatting with their trousers/pants down and well, you know... New versions of El Caganer are now produced each year, often with the faces of celebrities and politicians! This figure has been part of nativity scenes in Catalonia since the early 18th century. It's often hidden in a back corner of the Pesebre, well away from the stable! Similar figures can also sometimes be found in scenes in other areas in Spain such as Andorra, Valencia and Murcia; in Northern Catalonia (in southern France), Naples (in Italy) and some parts of Portugal. 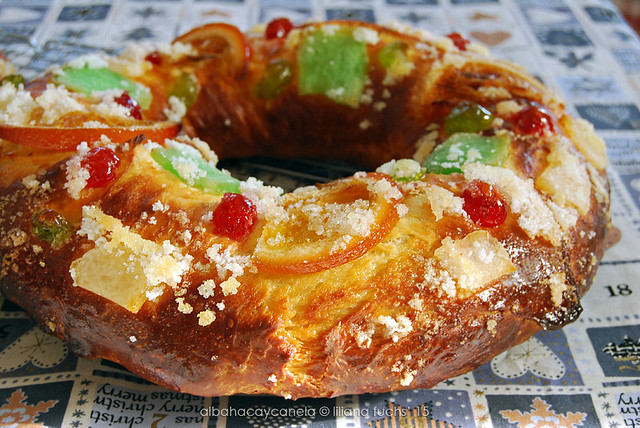 A special cake called 'Roscón' is eaten at Epiphany. Roscón means 'ring shape roll'. It is very doughy and is bought from a bakery on Epiphany morning. Roscón can be filled with cream or chocolate and contain a little gift.