In Australia, Christmas comes in the towards the beginning of the summer holidays! Children have their summer holidays from mid December to early February, so some people might even be camping at Christmas.

Because it's so hot at Christmas time in Australia, there are quite often massive bush fires across the country. Many volunteer bush fire fighters are involved in saving people and property and travel from all over Australia to help in other states.

Some Australians hang wreaths on their front doors and some people will also go out Christmas carol singing on Christmas Eve. People also decorate their houses and gardens with Christmas Trees and Christmas lights. Neighbors sometimes have little competitions to see who has got the best light display. The neighbors often visit each other to look at the light displays at night. Sometimes the displays are put out as early as December 1st. One street in Sydney raises over $(AUS)35,000 every year for charity with their co-ordinated street display!

Some Australians also decorate their houses with bunches of 'Christmas Bush', a native Australian tree with small green leaves and cream colored flowers. In summer the flowers turn a deep shiny red over a period of weeks (generally by the week of Christmas in Sydney). Poinsettia plants are also popular plants used as decorations.

Another speculator tree which might be in flower at Christmas in Australia is the jacaranda. It has bright blue/purple flowers. Depending on where you live in Australia, it can flower from October into December. If you're really lucky you might see birds like lorikeets and rosellas, which make it even more colorful!

In each State capital city there is a large Carols by Candlelight service. Famous Australian singers like The Wiggles, John Farnham, Anthony Warlow, Colin Gery, Niki Webster and many more help to sing the carols. These carol services, held in different cities, are broadcast on TV across Australia. There are also huge Christmas pageants in each state capital city, that are also broadcast across the country. Most towns and cities have festivals and parades. In some places, there is a fireworks display at the local park.

Many towns, cities and schools also hold their own Carols by Candlelight services, with local bands and choirs sometimes helping to perform the Christmas Carols and songs. As it is the middle of Summer in Australia at Christmas time, the words to the Carols about snow and the cold winter are sometimes changed to special Australian words! There are also some original Australian Carols.

When he gets to Australia, Santa sometimes gives the reindeers a rest and might use kangaroos. He also changes his clothes for less 'hot' ones! Children often leave out carrots for Santa's reindeer and there might be some cake for Santa, with some cold beer but it's often non-alcoholic because Santa has to drive his sleigh.

Presents are normally exchanged between families on Christmas Day.

On Boxing Day most people go and visit their friends and often have barbecues at the beach. A famous Yacht race from Sydney to Hobart in Tasmania is also held on Boxing Day. Another Boxing Day tradition is the Boxing Day Cricket Test Match. It starts every year on Boxing Day and is held at the MCG (Melbourne Cricket Ground). 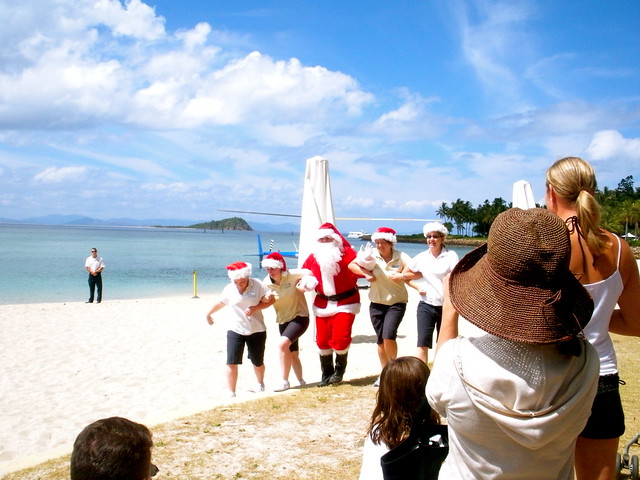 The Flying Doctor Service has to work all though-out Christmas. On Christmas Day the people who live in the outback send Christmas greetings to each other over the radio network.

Most families try to be home together for Christmas and the main meal is normally eaten at lunch time. Most people now have a cold Christmas dinner, or a barbecue with seafood such as prawns and lobsters along with the 'traditional english' food. On Christmas Eve, fish-markets are often full of people queuing to buy their fresh seafood for Christmas day. Some people like to have the 'traditional' Christmas Pudding but there might also be cold desserts like pavlova and trifle.