Christmas in Switzerland shares many of the customs from its neighbors Germany and Austria. But it has many traditions of its own!

Advent marks the start of the Christmas preparations. Advent calendars and crowns are both popular. In some villages, there are 'real' advent calendars with different houses decorating an 'Advent Window'. On the day when it's your house with the advent window, you hold a party for the villagers in the evening. There's food, mulled wine (called Glühwein) and music.

Christmas markets are very popular in towns and cities where you can buy all kinds of Christmas foods and decorations. There are big light displays and you can enjoy some more hot Glühwein! 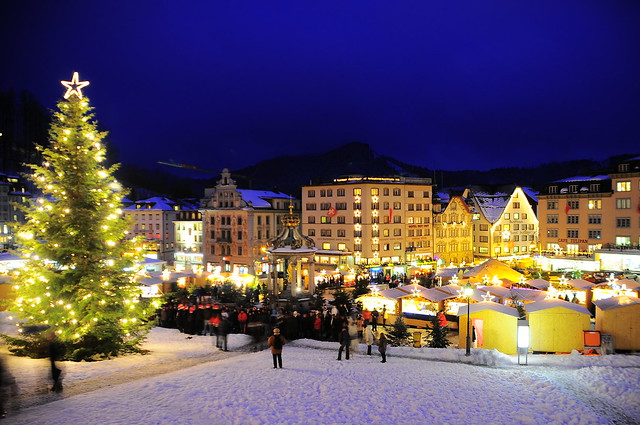 There are many local traditions of parades and carol singing in Switzerland.

In the Bernese Oberland region, there are processions starting on Christmas Day and finishing on New Year's Eve. They're known as the 'Trychle' as people parade wearing a big Trychler (cow bell) or carrying drums and normally wearing masks. They walk through the streets making lots of noise and are meant to scare the evil spirits away!

The 'Urnäsch Silvesterkläuse' processions take place in the Appenzell Ausserrhoden, especially in the villages around Urnäsch. They take place from December 31st to January 13th and date back over 200 years. The people (known as Kläuse in the processions) wear costumes, masks and head dresses. They go from house to house singing and making lots of noise to wish people a good new year.

'Star Singing' is also very popular among children. They go carol singing from the last week of Advent until Epiphany, carrying a large star infant of them. The star represents the star that the Wisemen followed when they visited the baby Jesus.

In Switzerland St Nicholas is known as 'Samichlaus' and he might visit you on 6th December. You might also be fortunate enough to have some presents from the baby Jesus (or Father Christmas) on the 25th and on Epiphany (6th January) you might be visited by the Befana (in South Switzerland) and/or the Three Kings (in the rest of Switzerland). That's a lot of present bringers!

Christmas Trees are popular in Switzerland and are often bought and decorated on Christmas Eve. Some people like use real candles on the tree, which are traditionally lit on Christmas Eve (when the presents are being opened!) and on New Year's Eve (for good luck).

The main Christmas meal is eaten on Christmas Eve and popular foods include a Christmas ham and scalloped potatoes with melted cheese and milk baked into it. Dessert is often a walnut cake and Christmas cookies. 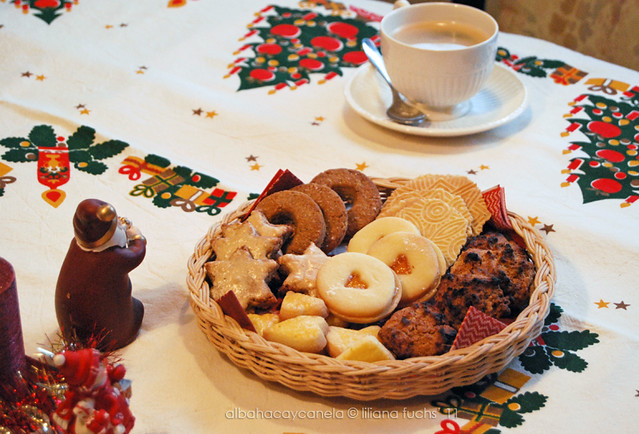 Cookies are very popular to buy and make. Each family has their own recipes and favorites.

Another popular food, especially for parties, is fondue (a pot of melted cheese which you dip bread in - and you might have to kiss the person on your left!). Sometimes 'FIGUGEGL' (fee-goo-geck-ul) is added to party invitations. This means 'Fondu isch guet und git e gueti Lune' (fondue is good and gives a good mood).

There are four official languages in Switzerland, Merry Christmas in Swiss German is 'Schöni Wiehnachte', in French it's 'Joyeux Noël', in Italian it's 'Buon Natale' and in Romansh it's 'Bellas festas da Nadal'.