Christmas in the Falkland Islands

The Falkland Islands are in the South Atlantic Ocean about 300 miles from the east coast at the bottom of South America. They are a British Overseas Territory even though they're about 8,000 miles away from the rest of the UK!

The Islands cover an areas of about 12,200 sq km (4,700 sq miles) but only have a population of around 3,000 people. But there are about 150,000 sheep! About two thirds of the population live in Stanley, the capital of the Islands. The rest are mainly farmers and live out on the Islands in what's called 'the camp'.

Because they're in the southern hemisphere, it's summertime at Christmas with long sunny days. The Islands share many Christmas traditions with the UK. There are very few trees on the islands (it's very windy!) but people still have Christmas Trees, although they're normally artificial ones. Lamb is the main Christmas dish as there's lots of sheep on the Islands! It's very expensive to fly in turkey from South America or the UK!

A pantomime is put on every year by the local dramatic society. Traditionally the Governor of the Islands (the Queen's official representative on the Islands) goes on the last night and is gently made fun of!

Children living in the camp get a small parcel of presents flown to them from Stanley. Santa's helper elves have to fly to the remote farms around the camp to deliver the presents!

On Christmas Eve people gather to sing Christmas carols under the 'whale bone arch' (made the from the jaw bones of two blue whales) which is next to the Christ Church Cathedral in Stanley. There's also a Christmas morning service. The Cathedral is the southernmost Anglican cathedral in the world. 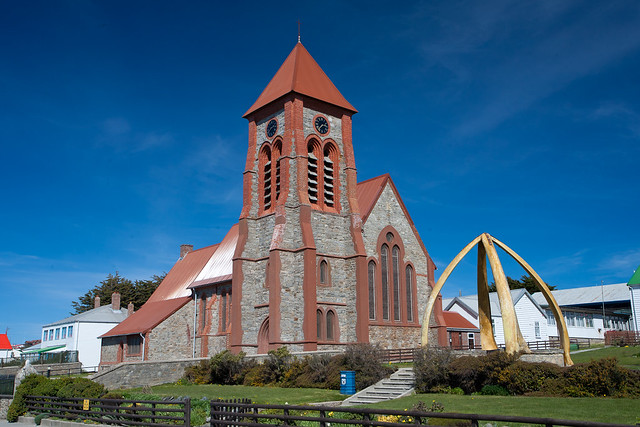 There's a British Military base on the Falkland Islands which is home to about 2000 military and civilian personnel. The chaplain at the base takes services at the base and around the Islands at Christmas time.

The Boxing Day horse races are very important and are held just outside Stanley on the race course. It's a very popular event for people who live on the Islands, especially in Stanley. The meeting has been held more than 100 times. It used to be a time when many people would only see each other during the whole year! Horses used to be the main way of getting around the Islands. Although there are more roads and cars now, taking part in the races is still very competitive. Some people have been riding in the races for decades! The most important race is 'The Governor's Cup'.

As well as horse races, there's the mile running race where people of all ages take part! Some of the soldiers based on the Islands also like to take part.