Songs and singing are very popular at Christmas time in Puerto Rico. People like to go carol singing, known as Parrandas (also sometimes called Asalto or Trulla). Friends gather late in the evening (about 10pm) and visit different houses. People are meant to be surprised and woken up by the music and singing of the 'parranderos' (those taking part in the 'parranda'), although most people have 'arranged' that they will be visited; because the custom is that when you've been 'woken up' you have to join in the parranda so it grows during the evening as more party go-ers join in! The fun can last all night, finishing at dawn! 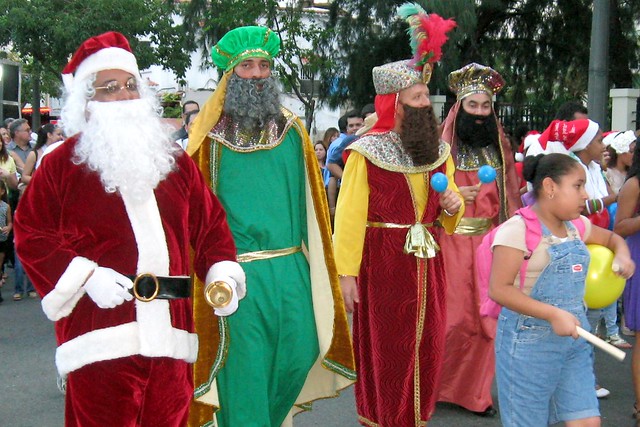 Another popular type of music at Christmas in Puerto Rico are 'Aguinaldos' (Christmas songs). Some are religious and called 'villancicos'. Some have a creole/criollo rhythm called 'décimas navideñas'. Popular and traditional Christmas songs are also sung and played.

Puerto Rican homes are decorated with greenery, often with branches from palm trees as well as Christmas decorations similar to those in the USA like Christmas Trees (normally artificial). Nativity Scenes 'nacimientos' or 'pesebres' are also popular. The figures of the Three Kings are very important. People also like to wear a traditional straw hat called a 'pava' at Christmas celebrations.

Christmas Eve is known as 'Nochebuena'. The main celebrations and Christmas meal happen on Nochebuena. Christmas Day ('Navidad') is the day that you recover from the Nochebuena!

'Misa de Aguinaldos' are special Catholic Masses which are held from the 15th to the 24th December. The services are nearly all sung and use traditional Puerto Rican musical instruments such as the cuatro (a Puerto Rican guitar), guitars, güiros (a percussion instrument you rub a stick up and down), and maracas. The masses are held at dawn (about 6am).

On Christmas Eve there's a special Misa de Aguinaldo at midnight called the Misa de Gallo (mass of the rooster). It is a very important and festive mass which includes carols, a nativity play with children dressed people from the Christmas Story and there's lots of candles. It's traditional for families to go to the mass to celebrate Christmas. 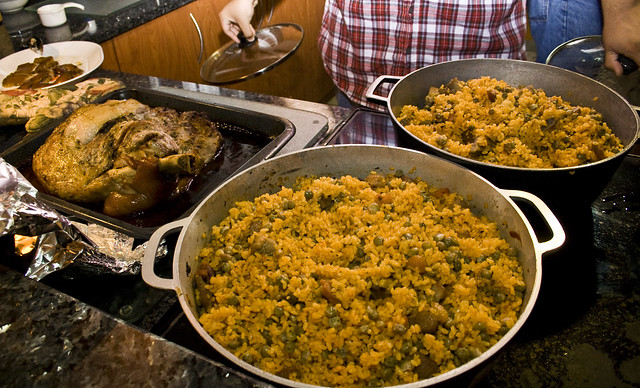 The main Christmas meal is normally 'lechón asado' (roast pork often cooked on a spit) served with 'arroz con gandules' (rice, pigeon peas and pork which is cooked in sofrito sauce), 'plátano' (plantains) and 'pasteles' (a dough made from mashed green bananas filled with meat and wrapped/cooked in banana leaves). Cooking the roast pig can take all day and starts early in the morning. Lots of Christmas music is played during the day to keep people entertained.

Popular Christmas desserts are 'arroz con dulce' (a kind of rice pudding) and 'tembleque' (a set custard made with coconut milk). The desserts are eaten cold. People like to drink 'coquito' (a drink like eggnog made with rum!). Guests often bring the desserts.

On December 28th Holy Innocents Day 'Día de los Inocentes' is celebrated. It's a bit like April Fools day where people try to trick each other. But in the town of Hatillo there's an old custom of a carnival on that day. Men dressed as King Herod's soldiers 'kidnap' children and people have to give the soldiers sweets and candy to get the children back!

New Year's Eve is called 'Despedida de Año' or 'Año Viejo'. When the clock strikes midnight, it's traditional to eat a grape on each chime for good luck! Then everyone hugs each other and people celebrate the new year letting off fireworks and firecrackers and honk their car horns! People then like to listen to a traditional poem called 'El Brindis del Bohemio' (A Bohemian Toast) which is played on the radio.

Epiphany is also a popular celebration in Puerto Rico. Epiphany Eve on the 5th of January is called 'Víspera de Reyes'. Traditional Catholics go to church to pray the rosary to honor the Three Wisemen/Kings. Children also hope that they be left gifts by the Wisemen and leave fresh grass in shoeboxes under their beds for the King's camels to eat.

Epiphany on the 6th January is called 'Día de Reyes' (Day of the Kings). Children wake up early to check out what the Kings have left them! On the 6th, 7th and 8th people also remember the three Wisemen/Kings: 6th = Gaspar; 7th = Melchor; 8th = Baltazar. Traditionally after Epiphany there are special services honouring Jesus and the Kings/Wisemen called 'Octava de la Epifanía'. They last eight days (octava is eighth in Spanish), starting on the 6th January and ending on the 13th January. Not many people take part in them now and Christmas and New Year celebrations often finish after 'Día de Reyes'.