In Serbia, the main Church is the Orthodox Church and they still use the old 'Julian' Calendar, which means that Christmas Eve is on 6th January and Christmas Day is on the 7th January! Advent in the Orthodox Church starts on 28th November and last for six weeks. During Advent, some people fast and they don't eat food that comes from animals (meat, milk, eggs, etc.).

The countries of Serbia and Montenegro share many Christmas traditions.

On Christmas Eve (called 'Badnji dan' during the day and 'Badnje veče' after sunset), families gather and many people fast and don't eat food that comes from animals. It is the last day of the Christmas fast. Christmas is a very religious holiday and most people go to the Christmas Services.

There are a lot of old Serbian traditions associated with the countryside, which have now lost their meaning because more people live in towns and cities. On the morning of Christmas Eve, the father of the family used to go to the forest to cut a young oak called the 'Badnjak' (Christmas Eve tree) but today people just buy one. The Badnjak is then burnt like a Yule Log.

There are sometimes large bonfires outside churches where oak branches and Badnjak are burnt.

On Christmas Day the dawn is greeted with church bells ringing and sometimes people firing guns into the air! The first person to enter a house on Christmas Day is called a položajnik and it's thought to bring luck to the house and family. The položajnik is often pre-arranged. But if the family don't have a good year, they don't ask the same person back!

Early on Christmas morning, girls traditionally collected water to bring to their family. This was called 'strong water' and was meant to have special powers. People would drink some strong water and wash their faces in it before having breakfast! 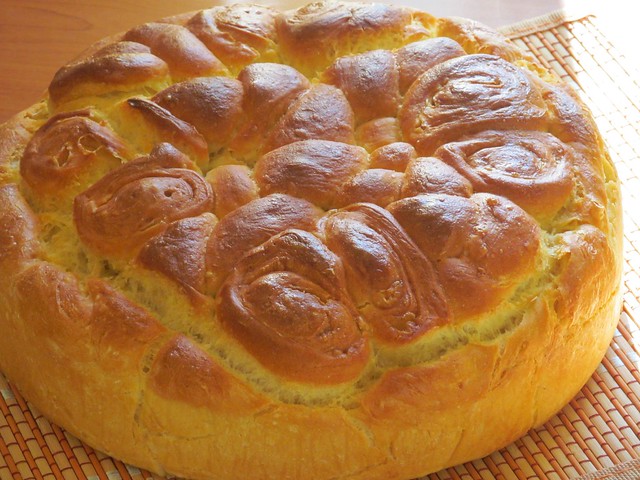 At Christmas a special kind of bread is eaten. It's called 'cesnica' and is made in a round shape. Sometimes it's made using some of the 'strong water'. Each member of the family gets a piece (and the house does too). There is a coin hidden in it and whoever gets the coin will be particularly fortunate in the next year!

Other popular Christmas dishes include pecenica (roast pork), sarma (cabbage stuffed with rice and ground meat) and lots of cakes!

Under the dinner table there should be some straw as a symbol of the stable/cave where Jesus was born. When the straw is spread out, some people make the noise of a chicken! Clucking like a chicken symbolises that Jesus wanted people to follow him like one big family (like chickens gather together!). It's also common for a handful of walnuts to be spread on the straw.

People in Serbia also celebrate St. Nicholas' Day, but on the 19th December. During the time when Serbia was under communist control (after World War II until about 20 years ago), the communist government didn't like St. Nicholas or Santa Claus, so they had their own version called Grandfather Frost (Дедa Мрaз / Deda Mraz) or Christmas Brother (Божић Бата / Božić Bata), who came on New Year's Eve.

Traditional Serbian customs have also mixed with western customs. For example people also have Christmas Trees but they are decorated on New Year's Eve, not at Christmas!