In the days of the Soviet Union, Christmas was not celebrated very much. New Year was made into the important time. Following the revolution in 1917, Christmas was banned as a religious holiday in 1929 and Christmas Trees were banned until 1935 when they turned into 'New Year' Trees! If people did want to celebrate Christmas, they had to do it in secret just in their families.

After the collapse of the Soviet Union in 1991, people were free to celebrate Christmas again. But it's still a quieter and smaller holiday in Russia after the big New Year celebrations.

The New Year is the big time for spending lots of money and eating and drinking lots. Christmas is much more religious and private.

New Year is also when 'Grandfather Frost' (known in Russian as 'Ded Moroz' or Дед Мороз) brings presents to children. He is always accompanied by his Granddaughter (Snegurochka). On New Year's eve children hold hands, make a circle around the Christmas tree and call for Snegurochka or Ded Moroz. When they appear the star and other lights on the Christmas tree light up! Ded Moroz carries a big magic staff. The traditional greeting for Happy New Year is 'S Novym Godom'.

Christmas in Russia is normally celebrated on January 7th (only a few Catholics might celebrate it on the 25th December). The date is different because the Russian Orthodox Church uses the old 'Julian' calendar for religious celebration days. The Orthodox Church also celebrates Advent. But it has fixed dates, starting on 28th November and going to the 6th January, so it's 40 days long.

The official Christmas and New holidays in Russia last from December 31st to January 10th. 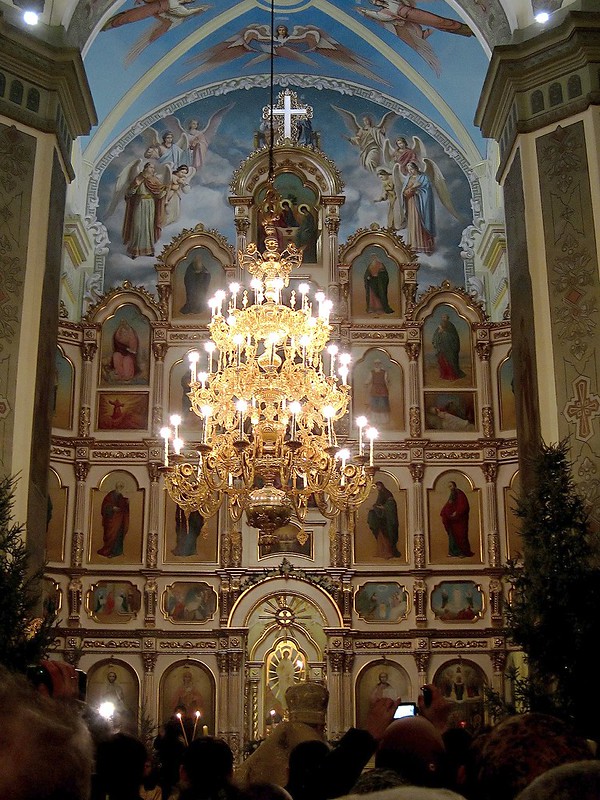 Some people fast (don't eat anything) on Christmas Eve, until the first star has appeared in the sky. People then eat 'sochivo' or 'kutia' a porridge made from wheat or rice served with honey, poppy seeds, fruit (especially berries and dried fruit like raisins), chopped walnuts or sometimes even fruit jellies!

Kutia is sometimes eaten from one common bowl, this symbolizes unity. In the past, some families like to throw a spoonful of sochivo up on the ceiling. If it stuck to the ceiling, some people thought it meant they would have good luck and would have a good harvest!

The Russian word for Christmas Eve 'sochelnik', comes from the word 'sochivo'.

Some Orthodox Christian Russians also don't eat any meat or fish during the Christmas Eve meal/feast.

Other popular Christmas Eve foods include, beetroot soup (borsch) or vegan potluck (solyanka) served with individual vegetable pies (often made with cabbage, potato, or mushroom); sauerkraut, porridge dishes such as buckwheat with fried onions and fried mushrooms, salads often made from vegetables like gherkins, mushrooms or tomatoes, and also potato or other root vegetable salads. The meal often consists of 12 dishes, representing the 12 disciples of Jesus.

'Vzvar' (meaning 'boil-up') is often served at the end of the meal. It's a sweet drink made from dried fruit and honey boiled in water. Vzvar is traditionally at the birth of a child, so at Christmas it symbolizes the birth of the baby Jesus.

Following the meal, prayers might be said and people then go to the midnight Church services. They often don't wash the dishes until they get home from Church - sometimes not until 4.00am or 5.00am!

The main meal on Christmas day is often more of a feast with dishes like roast pork & goose, Pirog and Pelmeni (meat dumplings). Dessert is often things like fruit pies, gingerbread and honeybread cookies (called Pryaniki) and fresh and dried fruit and more nuts.

There are Russian Christmas cookies called Kozulya which are made in the shape of a sheep, goat or deer.

In some areas, children will go carol singing round the homes of friends and family and to wish people a happy new year. They are normally rewarded with cookies, sweets and money.

To people in western Europe and the USA, one of the most famous things about Christmas in Russia is the story of Babushka. Babushka means Grand Mother in Russian. It tells the story of an old women who met the Wise men on their way to see Jesus.

However, most people in Russia have NEVER heard of the story as it was probably created by an American poet and writer called Edith Matilda Thomas in 1907! I've had many emails from Russian visitors to the site who have never heard the story before!

The Story of Babushka

Once in a small Russian town, there lived a women called Babushka. Babushka always had work to do sweeping, polishing, dusting and cleaning. Her house was the best kept, most tidy house in the whole village. Her garden was beautiful and her cooking was wonderful. One evening she was busy dusting and cleaning, so busy that she didn't hear all the villagers outside in the village square talking about and looking at the new star in sky.

She had heard about the new star but thought, "All this fuss about a star! I don't even have the time to look because I'm so behind with my work. I must work all night!" So, she missed the star as it shone brightly, high overhead. She also missed the little line of twinkling lights coming down towards the village at dawn. She didn't hear the sounds of the pipes and drums. She missed the voices and whispers of the villagers wondering whether the lights were an army or a procession of some sort. She missed the sudden quiet of the villagers and even the footsteps coming up the path to her door. But the one thing that she couldn't miss was the loud knocking on her front door!

"Now what is that?" she wondered, opening the door. Babushka gaped in amazement. There were three kings at her door with one of their servants! "My masters need a place to rest," the servant said, "and yours is the best house in the village." "You want to stay here?" asked Babushka. "Yes, it would only be until night falls and the star appears again." the servant replied. Babushka gulped. "Come in, then." she said.

The kings were very pleased when they saw all of the of the home-baked bread, pies and cakes. She dashed about, serving them, asking lots of questions. "Have you come a long way?" "A very long way." sighed Caspar. "Where are you going?" "We're following the new star." said Melchior. "But where?" The kings didn't know, but they believed that it would lead the to a new-born king, a King of Earth and Heaven. "Why don't you come with us?" asked Balthasar. "You could bring him a gift like we do. I bring gold, and my colleagues bring spices and perfumes." "Oh, I'm not sure that he would welcome me," said Babushka, "and what could I bring for a gift? Toys! I know I could bring a toy. I've got a cupboard full of toys." she said sadly. "My baby son, died when he was small." Balthasar stopped her as she went to tidy the kitchen up. "This new king could be your king too. Come with us when the star appears tonight." he said. "I'll think about it." sighed Babushka.

As the kings slept, Babushka tidied up as quietly as she could. "What a lot of extra work there was!" she thought, "and this new king, what a funny idea, to go off with the kings to find him."

Babushka shook herself. There was no time for dreaming, all this washing-up and putting away had to be done. "Anyway," she thought, "how long would she be away? What would she wear? What about the gift?" She sighed. "There is so much to do. The house will have to be cleaned when they've gone. I couldn't just leave it." Suddenly it was night-time again and the star was in the sky. "Are you ready, Babushka?" asked Balthasar. "I'll come tomorrow," Babushka called, "I must just tidy here first and find a gift."

The kings went away sadly. Babushka ran back into her house, keen to get on with her work.

Finally, she went to the small cupboard, opened the door and gazed at all the toys. But they were very dusty. They weren't fit for a baby king. They would all need to be cleaned. She cleaned all of the toys until each one shined. Babushka looked through the window. It was morning! The star had came and gone. The kings would have found somewhere else to rest by now. She could easily catch them up, but she felt so tired. She had to sleep. The next thing she knew, she was awake and it was dark outside. She had slept all day! She quickly pulled on her cloak, packed the toys in a basket and ran down the path the kings had taken.

Everywhere she asked "Have you seen the kings?" "Oh yes," everyone told her, "we saw them. They went that way." For a day Babushka followed the trail of the kings and the villages got bigger and became towns. But Babushka never stopped. Then she came to a city. "The palace," she thought. "That's where the royal baby would be born." "No, there is no royal baby here," said the palace guard when she asked him. "What about three kings?" asked Babushka. "Oh yes, they came here, but they didn't stay long. They were soon on their journey." "But where to?" asked Babushka. "Bethlehem, that was the place. I can't imagine why. It's a very poor place. But that's where they went." replied the guard. She set off towards Bethlehem. It was evening when Babushka arrived at Bethlehem and she had been traveling for a long time. She went into the local inn and asked about the kings. "Oh yes," said the landlord, "the kings were here two days ago. They were very excited, but they didn't even stay the night." "And what about a baby?" Babushka cried. "Yes there was." Said the landlord. "The kings asked about a baby, too." When he saw the disappointment in Babushka's eyes, he stopped. "If you'd like to see where the baby was," he said quickly, "it was across the yard there. I couldn't offer the couple anything better at the time. My inn was really full, so they had to go in the stable."

Babushka followed him across the yard. "Here's the stable." he said. He left her in the stable. "Babushka?" Someone was calling her from the doorway. He looked kindly at her. She wondered if he knew where the family had gone. She knew now that the baby king was the most important thing in the world to her. "They have gone to Egypt, and safety," he told Babushka. "And the kings have returned to their countries. But one of them told me about you. I am sorry but you are too late. It was Jesus that they found, the world's Savior."

Babushka was very sad that she had missed Jesus and it is said that Babushka is still looking for him.