At Christmas time in Lithuania it is very cold, normally with snow and ice on the ground.

But before the meal can be eaten, lots of preparations have to take place. The whole house is cleaned, the bedding is changed and everyone washes and puts on clean clothes ready for the meal. Many Lithuanians used to go to the bathhouse to be cleaned before the meal. Some people thought being clean helped to protect them from evil or diseases during the coming year. During Christmas Eve, working men would put away their tools and clean the cattle pens and farmyard, etc.

Many people fast (don't eat anything) during the day. The Kūčios meal also shouldn't contain any meat.

Straw is a traditional decoration. Is it normally spread on the table top and then covered with a clean, white tablecloth. The table is then decorated with candles and small branches or twigs from a fir tree. The straw reminds people of the baby Jesus lying in a manger. A superstition says that if you pull a piece of straw from under the tablecloth and it's long, you will have a long life; but if it's short you will have a short life; and a thick straw means a rich and happy life!

Often an extra place is set - for a family member who can't come to the meal or if a family member has died during the past year. Sometimes a candle is lit to remember family members who died. Some people believe that dead family members come and join the family round the table. People who are going to be alone on Christmas Eve are also invited to meal.

At the center of the table is a plate of Christmas wafers - one wafer for each person at the meal. In some parts of Lithuania the wafers have the scene of the birth of Jesus on them.

The meal starts when the first stars can be seen in the night sky. If it's cloudy, the 'head of the house' decides when the meal will start! The wafers are offered to each person at the table and Christmas greetings are exchanged. Sometimes an apple is also cut into as many people at the meal and is shared. This remembers the apple eaten in the Garden of Eden.

The Kūčios meal normally has 12 dishes - one for each of Jesus's followers. None of the dishes contain meat (and some people also don't have milk or eggs in them).

After the meal (or possibly between the main and sweet courses) there might be a visit from 'The Old Man of Christmas' (Santa Claus) with presents! People will also exchange presents between themselves.

When the presents have been exchanged, children often go to bed and the adults might go out to Midnight Mass (Bernelių mišios - which means Shepherds's Mass).

Popular Christmas Tree decorations in Lithuania are ones made from white paper straws. They are often in the shapes of stars, snowflakes and other geometric shapes.

Nativity Cribs are also popular in Lithuania with very large scenes often being put outside churches. 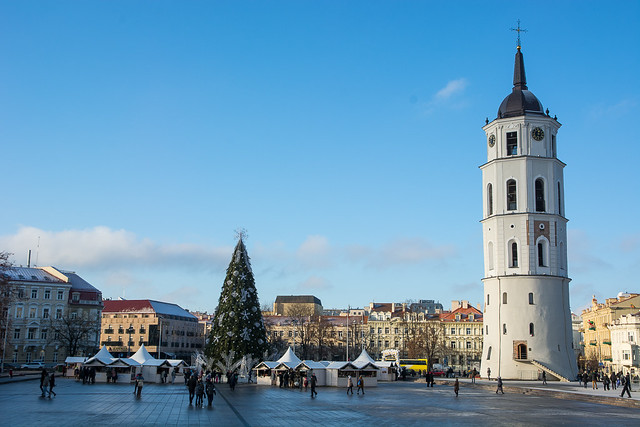 The Christmas season lasts until the 6th of January - Epiphany.