In Vietnam, Christmas Eve is often more important than Christmas Day. Christmas isn't an official public holiday and many people think it's only a holiday for Christians.

In Ho Chi Minh city (which is the largest city in Vietnam and used to be called Saigon) people (especially young people) like to go into the city center, where there is a Catholic Cathedral. The streets are crowded with people on Christmas Eve and in the city center cars are not allowed for the night.

People celebrate by throwing confetti, taking pictures and enjoying the Christmas decorations and lights of big hotels and department stores. Lots of cafes and restaurants are open for people to enjoy a snack!

Not many people in Vietnam are Christians, but some people like to go to Midnight Mass services to watch the Nativity plays and hear Christmas music.

Vietnam used to be part of the French Empire and there are still French influences in the Christmas traditions.

All churches, and some Christian homes, will have a nativity crib scene or 'creche'. Many Catholic churches have a big scene with nearly life size statues of Mary, Joseph, baby Jesus, the shepherds and animals. 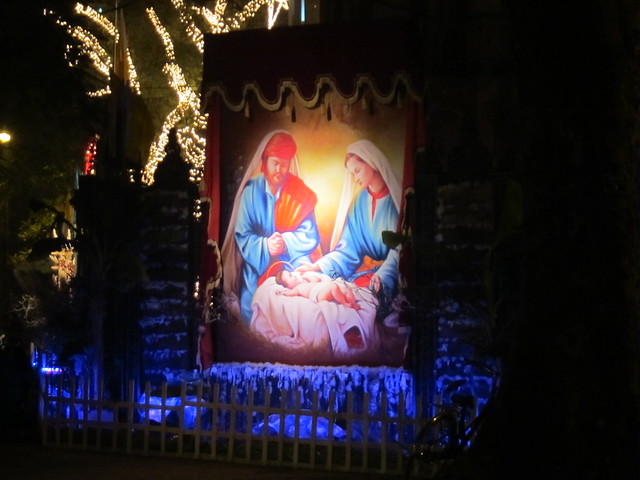 In some areas of Ho Chi Minh city, usually in Catholic parishes, people have big crib scenes in front of their houses and decorate the whole street, turning it into a Christmas area! These are popular for people to visit and look at the scenes.

Also like in France, the special Christmas Eve meal is called 'reveillon' and has a 'bûche de Noël' (a chocolate cake in the shape of a log) for dessert. Vietnamese people like to give presents of food and at Christmas a bûche de Noël is a popular gift. Other Christmas presents aren't very common, although some young people like to exchange Christmas cards.

It's very hot for Santa in Vietnam and it can't be very comfortable wearing all that velvet in a hot country! Santa is called 'Ông già Noel' (it means Christmas old man).