Christmas is the celebration of the birth of Jesus. The word nativity comes from the latin word 'natal' which means birth (and is also where we get the word 'native' from).

It is traditional in the UK for Primary (Elementary) schools to perform Nativity Play for the parents and local people associated with the school. The Nativity Play recreates the scene of Jesus' Birth and tells of how Mary and Joseph were visited by the Shepherds and Wise Men. The parts of Mary, Joseph, the Shepherds and the Wise Men are played by children. If the school is attached to a Church, the play often takes place in the Church. Sunday Schools in Churches also sometimes put on Nativity Plays. 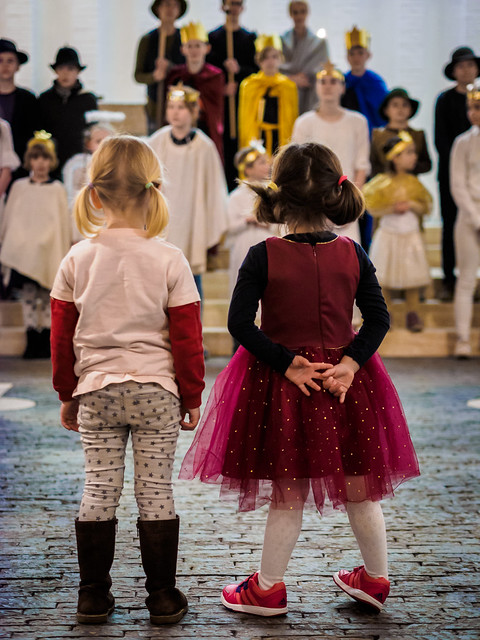 In the past, it was common for live animals including an ox and donkey and other farm animals (but not pigs) to be used in the plays. Sometimes they still are, but it is now more common for children to dress up as the animals in costumes or to have animal props.

The first Nativity Play was not performed by Children in the UK, but in a cave by Monks in Italy! St. Francis of Assisi and his followers acted in the first play in 1223 to remind the local population that Jesus was born for them, as he was born into a poor family like theirs and not to a rich family.

St. Francis told the part of each character in the story himself using wooden figures in the play. After a couple of years, the play had become so popular that real people played the parts of the characters in the story. Songs were sung by the people taking part and they became what we call Christmas carols today!

Now cribs are used in Churches all over the world and even in some homes (we have a wooden one in my house) to remind people of the story. Sometimes religious pictures and statues are called icons. Some Catholic and Orthodox Christians have icons of Mary and the baby Jesus in their homes.

In some countries such as Italy and Malta, and many South American countries, the crib is the most important Christmas decoration. The city of Naples, in Italy, has used cribs to decorate houses and Churches since the 1020s! That's even before St. Francis of Assisi put on his play. Naples is also the home to the world's largest nativity crib scene. It's in the 'Museo Nazionale di S. Martino' and has 162 people, 80 animals, angels, and about 450 other smaller objects. Find out more about Nativity cribs in Naples in Italy.

Nativity Scenes called 'Pessebres' are popular in the Catalonia region of Spain.

Cribs also have a long tradition and importance in Malta, where they are called 'Presepju'. There's a special society that keep the tradition alive. Find out more about Nativity cribs in Malta.

You can make an online Nativity Scene in the fun section of the site.

Although nativity scenes are often shown to be in a stable or cave, Jesus was actually probably born in a normal house!