The name Kwanzaa comes from the phrase 'matunda ya kwanza' which means 'first fruits' in the Swahili language (an Eastern African language spoken in countries including Kenya, Uganda, Tanzania, Mozambique and Zimbabwe). Kwanzaa is mostly celebrated in the USA. 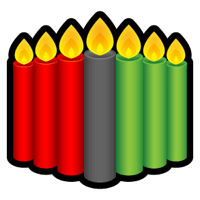 During Kwanzaa a special candle holder called a kinara is used. A kinara hold seven candles, three red ones on the left, three green ones on the right with a black candle in the center. Each night during Kwanzaa a candle is lit. The black, center, candle is lit first and then it alternates between the red and green candles stating with the ones on the outside and moving inwards. This is quite similar to the lighting of the menorah in the Jewish Festival of Lights, Hanukkah.

The seven days and candles in Kwanzaa represent the seven principles of Kwanzaa (Nguzo Saba): 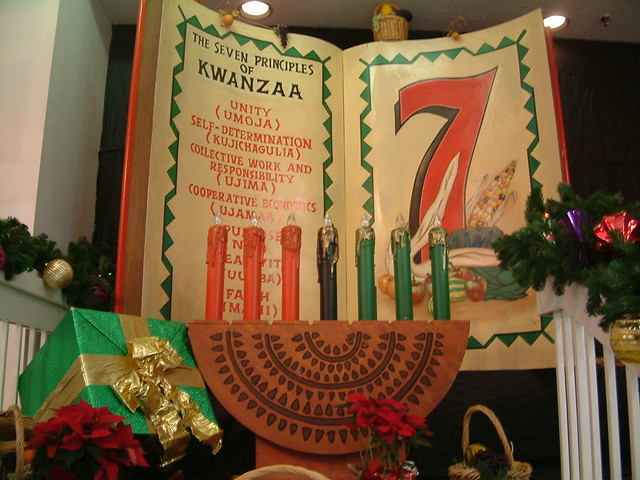 There are also seven symbols used in Kwanzaa. The seven items of often set on a Kwanzaa table, with the kinara, in the house:

There's also a special greeting used during Kwanzaa in Swahili. It's 'Habari gani' and the reply is the principle for that day. (Umoja on the first day, Kujichagulia on the second and so on.)

The Kwanzaa festival was created by Dr. Maulana Karenga in 1966. Dr. Karenga wanted a way bring African Americans together and remember their black culture. Harvest or 'first fruit' festivals are celebrated all over Africa. These were celebrations when people would come together and celebrate and give thanks for the good things in their lives and communities.

From these festivals he created Kwanzaa.