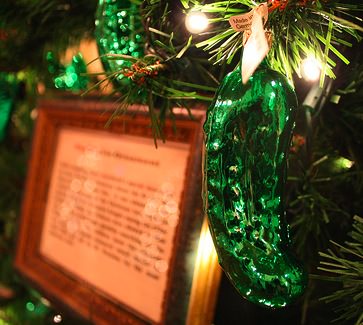 The tradition of the Christmas Pickle has got to be one of the strangest modern Christmas customs, in that no one is quite sure why it exists at all!

In the 1880s Woolworth stores started selling glass ornaments imported from Germany and some were in the shape of various fruit and vegetables. It seems that pickles must have been among the selection!

However, the claim that it's an old German tradition seems to be a total myth! Not many people in Germany have even heard of the Christmas Pickle! (Similarly in Russia virtually no one knows the supposedly Russian story of Babushka!)

Some families now have the tradition of hanging the pickle on the tree, with the first person/child to find it getting a present. But it probably didn't start in Germany!

There are two other rather far-fetched stories linking the pickle to Christmas.

One features a fighter in the American Civil War who was born in Bavaria (an area of what is now Germany). He was a prisoner, and starving, he begged a guard for one last pickle before he died. The guard took pity on him and gave a pickle to him. The pickle gave him the mental and physical strength to live on!

The other story is linked to St. Nicholas. It's a medieval tale of two Spanish boys traveling home from a boarding school for the holidays. When they stopped at an inn for the night, the evil innkeeper, killed the boys and put them in a pickle barrel. That evening, St. Nicholas stopped at the same inn, and found the boys in the barrel and miraculously bought them back to life!

There is an old legend about St. Nicholas rescuing boys from a barrel but the barrel was originally holding meat for pies - not pickles!

So it's most likely that an ornament salesmen, with a lot of spare pickles to sell, invented the legend of the Christmas Pickle!

The American city of Berrien Springs, MI (also known as the Christmas Pickle Capital of the World) has an annual pickle festival held during the early part of December.