The Tradition of the Christmas Pudding

Christmas (or Plum) Pudding is the traditional end to the British Christmas dinner. But what we think of as Christmas Pudding, is not what it was originally like!

Christmas pudding originated as a 14th century porridge called 'frumenty' that was made of beef and mutton with raisins, currants, prunes, wines and spices. This would often be more like soup and was eaten as a fasting meal in preparation for the Christmas festivities.

By 1595, frumenty was slowly changing into a 'plum pudding', having been thickened with eggs, breadcrumbs, dried fruit and given more flavor with the addition of beer and spirits. (The word 'plum' could also then mean dried plums like prunes and other dried fruit.) It became the customary Christmas dessert around 1650, but in 1664 the Puritans banned it as a bad custom.

In 1714, King George I re-established it as part of the Christmas meal, having tasted and enjoyed Plum Pudding. By Victorian times, Christmas Puddings had changed into something similar to the ones that are eaten today.

Over the years, many superstitions have surrounded Christmas Puddings. One superstition says that the pudding should be made with 13 ingredients to represent Jesus and His Disciples and that every member of the family should take turns to stir the pudding with a wooden spoon from east to west, in honour of the Wise Men.

The Sunday before Advent Sunday (which is also the last Sunday in the Church Year), is sometimes know as 'Stir-up Sunday'. This is because opening words of the Collect for the day (the main prayer) in the Book of Common Prayer of 1549 (used in Anglican Churches) says:

"Stir-up, we beseech thee, O Lord, the wills of thy faithful people; that they, plenteously bringing forth the fruit of good works, may of thee be plenteously rewarded; through Jesus Christ our Lord. Amen."

Although Christmas Puddings are eaten at Christmas, some customs associated with the pudding are about Easter! The decorative sprig of holly on the top of the pudding is a reminder of Jesus' Crown of Thorns that he wore when he was killed. Brandy or another alcoholic drink is sometimes poured over the pudding and lit at the table to make a spectacular display. This is said to represent Jesus' love and power.

In the Middle Ages, holly was also thought to bring good luck and to have healing powers. It was often planted near houses in the belief that it protected the inhabitants.

During Victorian times, puddings in big and rich houses were often cooked in fancy moulds (like jelly ones). These were often in the shapes of towers or castles. Normal people just had puddings in the shape of balls. If the pudding was a bit heavy, they were called cannonballs! 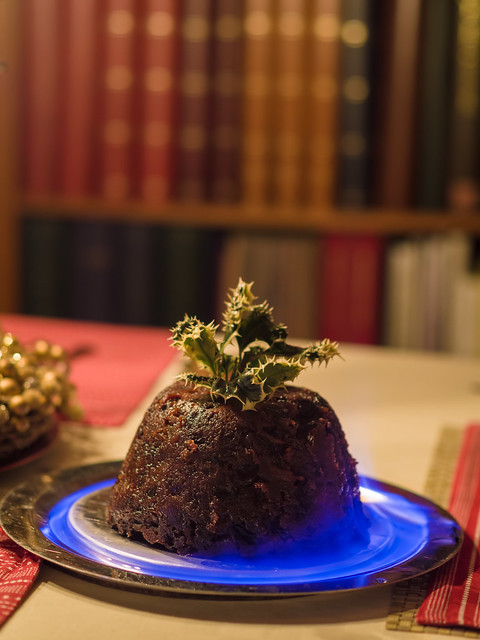 Putting a silver coin in the pudding is another age-old custom that is said to bring luck to the person that finds it. In the UK the coin traditionally used now is a silver 'sixpence'. The closest coin to that now is a five pence piece!

The tradition seems to date back to the Twelfth Night Cake which was eaten during the festivities on the 'Twelfth Night' of Christmas (the official end of the Christmas celebrations). Originally a dried pea or bean was baked in the cake and whoever got it, was 'king or queen' for the night. There are records of this practice going back to the court of Edward II (early 1300s). The bean was also sometimes a silver ring of small crown.

The first coins used were a Silver Farthing or penny. After WWI it became a silver threepenny bit. In 1937 the Threepence coin changed design (and also became made from mostly brass) so the silver sixpence took over as the pudding coin. The UK's Royal Mint still makes special 'Christmas Silver Sixpence' coins every year which you can use in puddings - but they cost a lot more to buy than sixpence! Some families still use old silver threepenny bits in their puddings.

You might also get other items (sometimes called 'tokens' or 'favours') placed in the Christmas Pudding which also meant to have special meanings:

Here's a recipe for Christmas Pudding.