Why Snow and Ice?

Snow, Ice and Christmas often go together, although why it should is a bit strange! There is no snow or ice in the Christmas story told in the Bible. However, snow does fall in Israel and the Palestinian Territories. Bethlehem and Jerusalem are on a range of hills that go north to south between the Mediterranean Sea and the Jordan valley. The top of these hills are about 1600 ft (500 m) high. The hills can have very cold weather from November to April and snow can often fall. So, although the Bible story may not have snow in it, Jesus may well have seen some snow in his life!

The reason that we think of Snow and Ice at Christmas is probably down to the Victorians! Although some traditions we associate with Christmas were taken over from the pre-Christian/pagan winter solstice festivals in Europe, it was the Victorians who gave us our 'traditional' Christmas in Europe and the USA At the start of the Victorian era, (1837) Britain was in a mini ice age that was from about 1550 to 1850. During this time, in London, a winter fair was often held on the frozen River Thames!

One of the main reasons that the Victorians put Snow and Christmas together was the book 'A Christmas Carol' written in 1843 by Charles Dickens.

It tells the story of a mean old business man called Ebenezer Scrooge who hates Christmas. During the night of Christmas Eve, he is visited by three ghosts, one of Christmas Past, one of Christmas Present and one of Christmas yet to come. They show him how mean he really is. He realises that making friends is more important than making money. When he wakes up on Christmas Day, he is a changed man and give lots of money and presents away. (If you don't know the story, I recommend that you read the book or see a film of the story! A very famous film of it was made in 1951 [4 years after Britain had some of its heaviest snow of the 1900s], but my favorite version is The Muppet Christmas Carol!!!)

When Charles Dickens was a child, Britain had very heavy snow falls around Christmas, so when he wrote 'A Christmas Carol' he put lots of snow and ice in it! He also put snow at Christmas in some of his other books like 'The Pickwick Papers'. Charles Dickens books were very popular (and still are!) so when the Victorians read the books, they thought of snow and Christmas together!

One of the other reasons that Snow and Ice became popular in Victorian times is because Queen Victoria's husband, Prince Albert, came from Germany where it was colder and he was used to lots of snow and ice being around at Christmas. He made Christmas Trees popular in the UK as well as lots of other Christmas traditions. Christmas Cards also started in Victorian times with pictures of snow scenes becoming very popular.

Another connection between snow and Christmas is the Song "I'm Dreaming of a White Christmas" It was first recorded, in 1942, by Bing Crosby and came from a film called 'Holiday Inn', set in the snowy countryside of Vermont, U.S.A. in December (there is a 75% chance of it snowing on Christmas Day in Vermont!). Irving Berlin wrote "I'm Dreaming of a White Christmas" and it only took only 18 minutes to record. The original version sung by Bing Crosby has sold at least 30 million copies. The song has also been recorded by many other people and groups and it has sold over 100 million copies in single versions (that's including all the different versions of it). Until 1997, Bing Crosby's recording of 'White Christmas' was the top selling single of all time! 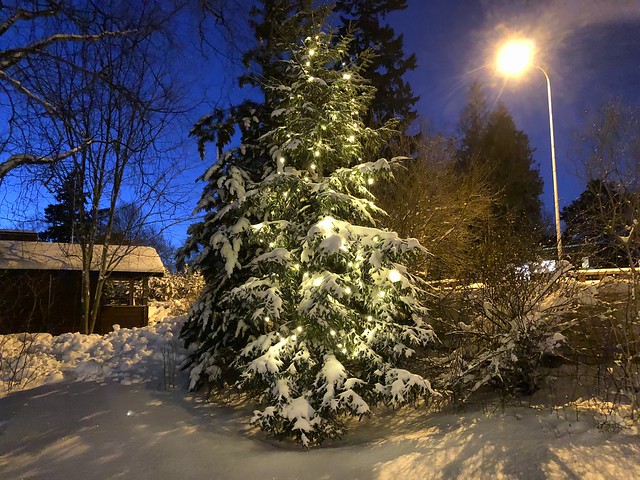 Lots of people nowadays are interested to see if they will have a 'White Christmas'. For most people, a White Christmas means a complete covering of snow on the ground where they live, with some snow falling on Christmas Day.

However, the British definition, used by the UK Meteorological Office (who say if it has been a White Christmas or not!), is that a single snow flake has been seen falling in the 24 hours of Christmas Day! This doesn't happen a lot in the UK!!!

Statistics show that in the UK, we get an official White Christmas about every 4 or 5 years and have real snow at Christmas about 1 in 10 years (but often this is only in Scotland!).

In the USA, a White Christmas can be some snow on the ground anywhere in the country! That normally happens because some states in the USA, like Vermont, are very cold in the winter and have lots of snow. But some states in the south of the USA don't have any snow at all and in places like Australia and New Zealand, where it is their summer in December, it's very rare to have snow at Christmas unless you're up in the mountains! 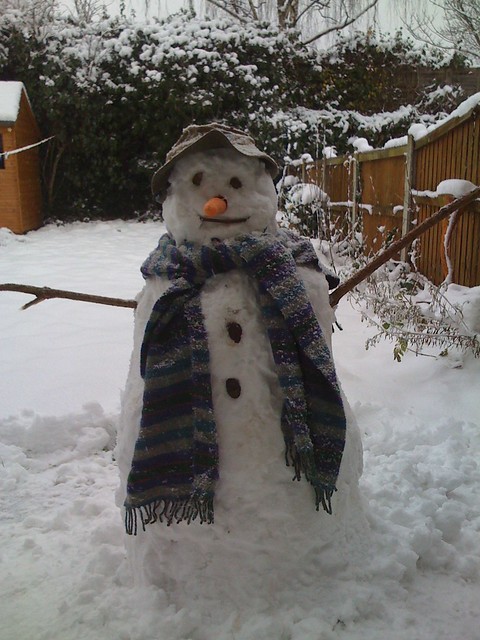 Snowmen were probably first made by people to scare away evil winter spirits. But now they are just a good excuse to have lots of fun in the snow! (If you know anything about why snowmen were first built, please let me know!)

Probably the most famous snowman is 'Frosty the Snowman' who appears in a Christmas song of the same name. The song was written in 1950 by Steve Nelson and Jack Rollins. It was recorded in 1953 by the American singer Perry Como and became very popular. A film called Frosty the Snowman was made in 1969 and told the story of a magical snowman who came to life and became best friends with a little girl. Sing along to 'Frosty the Snowman' (on a different site).

In the UK there is a famous animated film called The Snowman (made in 1982) about a snowman who comes to life and takes a little boy flying of to see Father Christmas. We used to watch it every year when I was in Primary (Elementary) School on the last school day before the Christmas holidays! The cartoon has a song in it called "We're Walking in the Air". It was made famous when it was released as a single in 1985 and sung by a choir boy called Aled Jones. Aled is now an adult and a popular television and radio presenter in the UK! (In the original animation, the song was sung by a choir boy called Peter Auty.)

There are many Snow and Ice carving festivals held all over the world. In these festivals artists and people who just like snow and ice, build large snow and ice sculptures. Because you need lots of Ice and Snow to have a festival they are normally held in colder countries, like the Scandinavian countries, the northern states in the USA, Canada, some parts of Japan and China. Some places import Snow and Ice so they can have a festival! 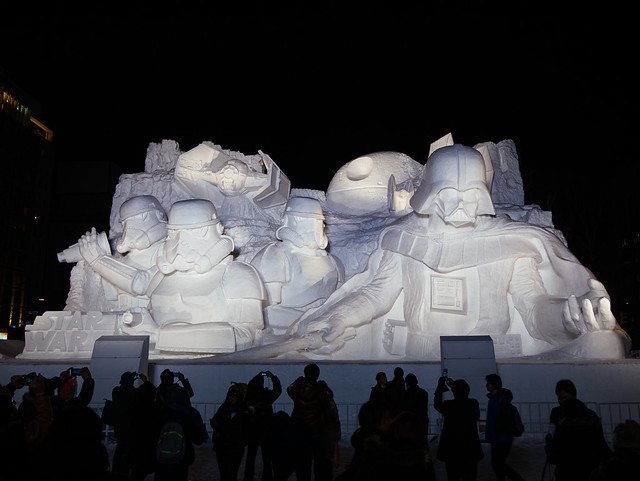 Some Snow and Ice Records

The tallest snowman in the world was made in Bethel, Maine, USA, in 2008. It was a snow woman called Olympia Snowe, named after a U.S. Senator representing Maine. Olympia Snowe was 122 ft 1 inch (37.21 m) tall. The previous record snowman also being to Bethel, Maine and was Angus the snowman who was 113 ft, 7.5in (35.5m) high.

The thickest ice in the world in found in Antarctica. The thickest bit of ice that scientists have measured by using radio echo soundings was 2.97 miles (4.8km) thick!