Many people think Christmas is on December the 25th and that's all there is to Christmas. However, for many people around the world, in different countries and in different Christian traditions, Christmas lasts for a lot longer than that - and it's even celebrated at different times!

Although December 25th (or the late afternoon/evening of December 24th) is the date when most people celebrate Christmas, there are some other dates as well!

The Armenian Apostolic Church celebrates Christmas on January 6th. It also celebrates Epiphany on this day.

Advent - The Time Before Christmas 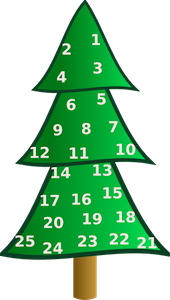 Before Christmas, many Christians use the time of Advent to prepare themselves and get ready to celebrate the joy of Christmas, when Christians celebrate of the birth of Jesus, who they believe is the Son of God.

Advent is normally a period of four Sundays and weeks before Christmas. In many Orthodox and Eastern Catholics Churches Advent lasts for 40 days, starting on November 15th.

During Advent many people fast (don't eat certain foods). The types of food people give up depends on their church tradition and where in the world they live.

After Christmas - The 12 Days of Christmas and Epiphany

After Advent, traditionally, Christmas celebrations (and often a feast!) started on Christmas Day and lasted for 12 Days - so they were known as The 12 Days of Christmas! The celebrations finished on the evening of 5th January, which is better known as Twelfth Night.

Throughout history, the 12 Days of Christmas were a time of feasting and fun.

Epiphany/Twelfth Night is also the time when it was traditional to take your Christmas decorations down - although some people leave them up until Candlemas.

Candlemas - The End of Christmas

You might think that Christmas ends when you take the Christmas Decorations down - but it doesn't! After both Christmas and the season of Epiphany, the end of the Christmas celebrations come on February 2nd, 40 days after Christmas, with Candlemas.

Candlemas, also known as the 'Presentation of Jesus at the Temple' or the 'Feast of the Purification of the Virgin (or Mary)' is the when some Christians remember the time when Mary and Joseph took the baby Jesus to the Jewish Temple in Jerusalem to give thanks to God for giving them a son.

It's a very important day in some Orthodox and Catholic churches.

The name Candlemas comes from 'Candle Mass' because in many Candlemas services, the candles are blessed to be used in churches during the coming year or are given out to people for them to use in their homes and private prayers.

In many Catholic churches, it's a time when people remember and renew promises they've made to the church and celebrate some of the prophecies which were given about Jesus.

In many Eastern/Orthodox churches, an all night vigil is held on the night before the candle blessing ceremony. In the morning, the candles are blessed and are given out to people.