Christmas in the United Kingdom

In the UK (or Great Britain and Northern Ireland), families often celebrate Christmas together, so they can watch each other open their presents!

Most families have a Christmas Tree (or maybe even two!) in their house for Christmas. The decorating of the tree is usually a family occasion, with everyone helping. Christmas Trees were first popularised the UK by Prince Albert, the husband of Queen Victoria. Prince Albert was German, and thought that it would be good to use one of his ways of celebrating Christmas in England.

Holly, Ivy and Mistletoe are also sometimes used to decorate homes or other buildings.

Most villages, towns and cities are decorated with Christmas lights over Christmas. Often a famous person switches them on. The most famous Christmas lights in the UK are in Oxford Street in London. Every year they get bigger and better. Thousands of people go to watch the big 'switch on' around the beginning of November. 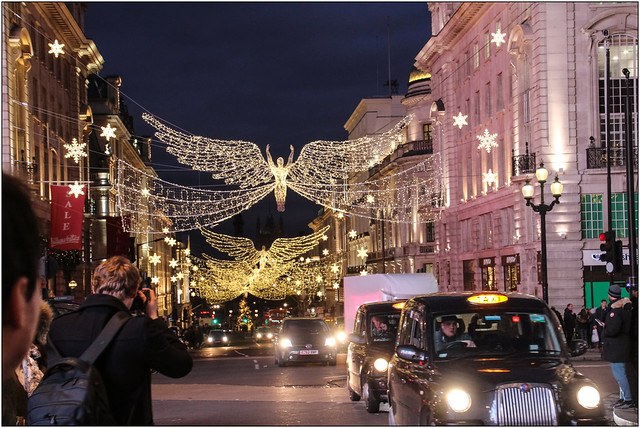 Like a lot of countries, Nativity Plays and Carol Services are also very popular at Christmas time. The Church that I go to always has a Carols by Candlelight Service where the church is only lit up by candles. It is a very special service and always makes me feel very Christmassy! Lots of other British churches also have Carols by Candlelight and Christingle services. The most famous UK Carol service is the Service of Nine Lessons and Carols which is broadcast on Christmas Eve at 3.00pm from the chapel of King's College, Cambridge.

Children believe that Father Christmas or Santa Claus leaves presents in stockings or pillow-cases. These are normally hung up by the fire or by the children's beds on Christmas Eve. Children sometimes leave out mince pies and brandy for Father Christmas to eat and drink when he visits them. Now, it's often a non-alcoholic drink that's left because Santa has to drive his sleigh.

There are some customs that only take place, or were started, in the UK. Wassailing is an old anglo-saxon custom that doesn't take place much today. Boxing Day is a very old custom that started in the UK and is now taken as a holiday in many countries around the world.

In the UK, the main Christmas Meal is usually eaten at lunchtime or early afternoon on Christmas Day. It's normally roast turkey, roast vegetables and 'all the trimmings' which means vegetables like carrots & peas, stuffing and sometimes bacon and sausages. It's often served with cranberry sauce and bread sauce. Traditionally, and before turkey was available, roast beef or goose was the main Christmas meal. One vegetable that is often at Christmas in the UK are brussel sprouts. I love them but lots of people don't!

Dessert is often Christmas Pudding. Mince pies and lots of chocolates are often eaten as well!

Trifle is also a popular dessert at Christmas. It's made in a large bowl and consists of a layer of sponge cake (or sponge fingers) at the bottom of the bowl (which is often soaked in sherry or brandy) then there's a layer of fruit (normally suspended in a fruit flavored jelly) and it's topped with a layer of custard and then whipped cream. In Scotland there's a variation called 'Tipsy Laird' which uses whiskey to soak the sponge and the fruit are raspberries.

The dinner table is decorated with a Christmas Cracker for each person and sometimes flowers and candles.

The UK is also famous for Christmas Cake - some people love it and some people really don't like it! It's traditionally a rich fruit cake covered with marzipan and icing - and often top with Christmas themed cake decorations like a spring of holly. 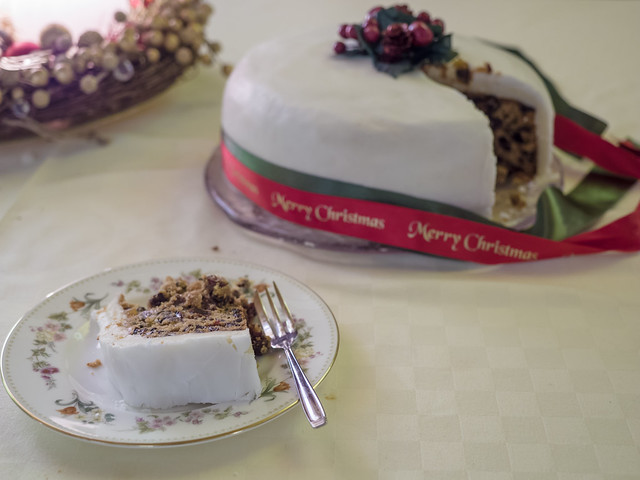 In North Derbyshire and South Yorkshire (in the north of England), some very special carol singing, called 'The Sheffield Carols', happens in some pubs during the weeks leading up to Christmas (the traditional day for sorting the carol singing is Armistice Sunday near the middle of November). The pubs are often rural and out on the hills in that part of England. The carols are often very local ones and the same carol often varies from pub to pub. Not all the carols are ones about the Christmas story. The pubs are often packed, especially the nearer it is to Christmas. The singing can be lead/accompanied by local folk musicians, an organ in the pub or sometimes the singing is un-accompanied. You can find more about these carol singing sessions on these sites: www.villagecarols.org.uk/ (there are some wonderful recordings of the carols being sung on there as well) and www.localcarols.org.uk/ (goes to another site).

In the UK, it doesn't snow very often, but people always want to know if it will be a 'White Christmas'. The British definition, used by the UK Meteorological Office (who say if it has been a White Christmas in the UK or not!), is that a single snow flake has been seen falling in the 24 hours of Christmas Day! This doesn't happen a lot in the UK!!! You can find out more on the UK's 'Met Office' site... (goes to another site)

Statistics show that in the UK, they get an official White Christmas about every 4 or 5 years and have real snow at Christmas about 1 in 10 years (but often this is only normally in Scotland!).

One sure way of getting some snow into Christmas in the UK is by watching the popular cartoon 'The Snowman' which is about a boy's adventure when his snowman comes to life. The animation was first shown on UK TV on Boxing Day in 1982. It's based on story book of the same name by the children's author and illustrator Raymond Briggs. For many families, it's now a 'must watch' over Christmas. (When I was at Primary/Elementary School in the 1980s, it was always shown to the school on the last morning before the Christmas holidays!) The Snowman also featured the song "Walking in the Air". In the animation, it was sung by Peter Auty, a choirboy at St Paul's Cathedral in London. However, the song became very famous in 1985 when it was used in a Christmas TV advert for the 'Toys "R" Us' chain in the UK. This time, it was sung by a choirboy called Aled Jones. Aled Jones is now an adult and is a TV and Radio presenter! The song has been recorded by lots of different people and groups (including an adult Aled singing a duet with his younger self) and is now a real UK 'Christmas classic'! In 2012 a sequel to The Snowman called "The Snowman and the Snowdog" was shown on Christmas Eve.

In Scots (a Scottish dialect) Happy/Merry Christmas is 'Blithe Yule'; in Gaelic it's 'Nollaig Chridheil'; in Welsh (which is spoken in some parts of Wales it's 'Nadolig Llawen', in Cornish (spoken by some poeple in Cornwall in south west England) it's 'Nadelik Lowen' and Manx (spoken by some people on the Isle of Man) it's 'Nollick Ghennal'. Happy/Merry Christmas in lots more languages.

Find out more about the History of Christmas in the UK...

The 'ban' on Christmas also took place in Scotland as well as England but it lasted longer. Its ban started in 1640 when the Scottish Parliament made the celebration of "Yule vacations" illegal - this was before the laws were made in England! This law was repealed in 1686 but the Church in Scotland was still very opposed to any Christmas celebrations. Christmas was only made a public holiday in 1958 and Boxing Day only became a holiday in 1974! Because of this, for 400 years, Christmas was celebrated much more quietly in Scotland.

In Scotland, New Year's Eve (which is called Hogmanay) became much more important than Christmas and is still a very important celebration! The word Hogmanay comes from a kind of oat cake that was traditionally given to children on New Year's Eve.

All across the UK, in cities and towns, there are fireworks to celebrate the New Year. Two of the most famous fireworks displays are in London, along the River Thames, and in Edinburgh at the Hogmanay celebrations. 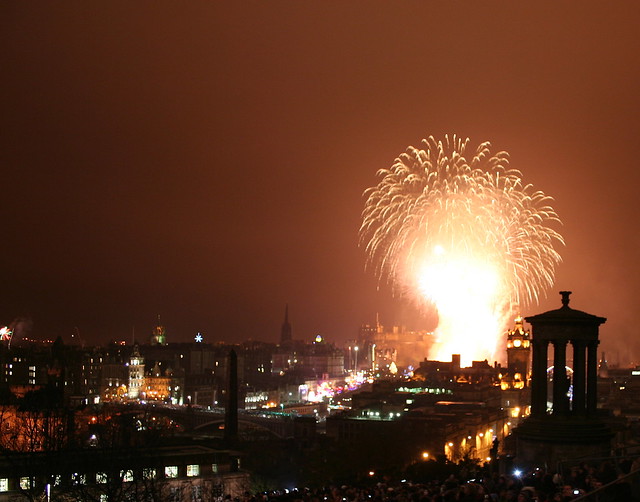 Also in Scotland, the first person to set foot in a house in a New Year is thought to have a big effect on the fortunes of the people that live there! This is known as 'first-footing'. Generally strangers are thought to bring good luck. Traditionally dark haired men are the most lucky - but this can depend on the area of the country you live in. In parts of northern England it is sometimes said that a stranger coming through the door carrying a lump of coal will bring good luck. Cleaning the house for to welcome the new year is an old Hogmanay tradition.

In parts of South Wales, there is the tradition of the 'Mari Lwyd' wassailing horse. The horse isn't a real one, but is a horse's skull that's decorated with ribbons and put on the top of a pole; the 'body' is a large cloth or blanket that someone hides under. The horse and its followers (the 'leader' who is dressed smartly and other men dressed up, sometimes as 'Punch and Judy') go from house to house, playing music and singing songs. No one is really sure how it started or got its name! You can find out more about the Mari Lwyd on Wales.com (goes to another site)

In some a few villages in North Wales there's a very old a special type of carol singing called Plygain singing which happens in Welsh chapels. Plygain services now normally take place during evening services leading up to Christmas. But Plygain started as an early morning service on Christmas day from about 3am to 6am. The word Plygain comes from a term meaning the cock crowing.

All the carols are based on Bible stories, not just the Christmas story, and all the carols sung in Welsh and are unaccompanied. Some are very old carols which have been passed down within one family for generations and they are only sung by people in that family.

People and groups take it in turn to go to the front of the chapel and sing their carol. There's normally no introductions or set order, it all happens spontaneously. When all the people/groups have taken a turn, the order starts again with different carols. Traditionally there was a short gap or silence between the songs so people could think about the Bible stories and words of the carols.

In Belfast, the capital of Northern Ireland, there's the tradition of the Black Santa. This started in 1976 when the Dean of Belfast Cathedral, Sammy Cooks, sat outside the Cathedral in the run up to Christmas and collected money for local charities. This 'sit out' has continued over the years and the current Dean still sits outside the Cathedral in his black church cassock (and some other warm clothes!) and collects money. You can now also donate online. The Black Santa collection in Belfast now raises thousands of pounds every year for charity. You can find out more about the Belfast Black Santa, and donate, on its website.

Having a swim on Christmas Day is done by some people in Northern Ireland, including in Helen's Bay and Portrush Harbour. Some people will even swim in a Santa hat!

An old tradition, for some people in Northern Ireland, was to put a candle in a window on Christmas Eve. This was meant to be a sign of welcome to people and remembers that Mary and Joseph had to find somewhere to stay in the Christmas Story.