Canada is a very large country and people of many different cultural backgrounds live there. Because of this, there are lots of different Christmas traditions in Canada. Many of the traditions and celebrations come from French, English, Irish, Scottish, German, Norwegian, Ukrainian and native/first nation influences.

People in Canada send Christmas Cards to their friends and family.

Canadians like to decorate their houses with Christmas Trees, lights and other decorations. There's often Christmas stockings hung by the fireplace, ready for Santa!

The main Christmas meal is often roast turkey with vegetables and 'all the trimmings' like mashed potatoes and vegetables. Traditional favorite Christmas desserts include Christmas/plum puddings and mincemeat tarts. Christmas crackers are popular with many people in Canada as well. A rich fruit Christmas Cake is also normally eaten around Christmas time!

However, people from different backgrounds and cultures have their own favorite foods at Christmas.

Going skiing, skating and tobogganing are also popular if there's snow at Christmas!

Canadian children also believe in Santa Claus. Canadians are especially proud to say that their country is the home of Santa Claus. (Although I'm sure the people in Finland would disagree!)

The Santa Claus Parade in Toronto is one of the oldest and largest Santa parades in the world! It started in 1913 when Santa was pulled through the streets of Toronto. Children along the route followed Santa and marched along with him. It's been taking place for over 100 years and now is a huge event with over 25 animated floats and 2000 people taking part! It's broadcast on TV around the world.

'Sinck Tuck' is a festival started by the Inuit that is celebrated in some provinces of Canada. This celebration consists of dancing and gift exchanging.

The Eastern Canadian province of Nova Scotia is known all over the world for its fir and pine Christmas Trees, so most families in Canada have a fir or pine Christmas Tree. One Canadian tradition is to send the biggest, best fir tree (grown in Nova Scotia) to Boston, USA because of the assistance given during the disaster, known worldwide, as the Halifax Explosion. This tradition has carried on for many years. Bostonians always love and appreciate the Nova Scotian Christmas Tree. They place this tree in the city and then light it during a ceremony to begin the Christmas season.

Mummering is a tradition which mainly takes place in the province of Newfoundland, more commonly in small towns and villages rather than large towns and cities. It's also sometimes called 'Jannying'. People dress up in costumes and knock on someone's door and say in a disguised voice, "Are there any Mummers in the night?" or "Any mummers 'loud in?'", meaning 'are mummers allowed in the house?' Then they sing and dance and have Christmas cake and a cup of something nice before moving on to the next house. In some places, if the host does not guess who the Mummers are, the host must join the Mummers in their merry-making. Going Mummering is a fun Christmas season activity for adults. Mummers usually come out between December 26th and January 6th (The 12 Days of Christmas). However, some come out only before Christmas Day. In some places Mummering is now banned because people used it as an excuse for begging. You can find out more about the history of Mummering in Newfoundland on the Live Rural Newfoundland and Labrador blog (goes to another site).

On the south shore of Nova Scotia, over Christmas, there's the tradition of Belsnickeling where people dress up in funny Santa costumes and go from house to house until the home owners guess who you were. It was especially popular in West & East Green Harbour. The Belsnicklers often brought musical instruments and sang. They were served Christmas cake or cookies. This tradition was brought to Nova Scotia by the 1751 Germans immigrants who settled Lunenburg and South shore.

In northern Canada, some people plan a Taffy Pull. This is held in honour of Saint Catherine, the patron saint of single women. This party provides an opportunity for single women to meet eligible single men!

Labrador City in Newfoundland holds a Christmas Light-up Contest each year. People dress the outside of their houses up with lights and often have big ice sculptures in their front gardens! They have no trouble finding enough snow or ice, because Labrador City has about 12-14 Feet of snow every year!

Many Canadian families have cookie-baking parties. They bring a recipe for Christmas cookies, bake them and then exchange them with the members of their family. Gingerbread people and houses are favorites, along with cheese straws. At the end of the party, each family goes home with a variety of different cookies to enjoy over the Christmas season. 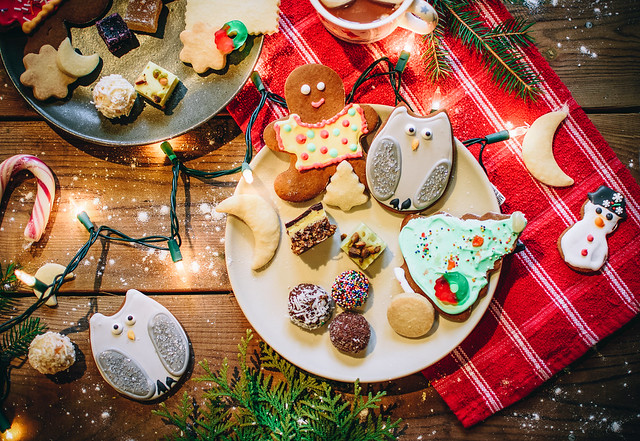 Many families of French descent have a huge feast/party on Christmas Eve called a 'Réveillon' that lasts well into the early hours of Christmas morning after taking part in Christmas Eve Mass. When people are at Midnight Mass, they hope that 'Père Noel' (Santa) will visit their house and leave gifts for children under the tree. The traditional Christmas meal for people in Quebec, is a stew called 'ragoût aux pattes de cochons' which is made from pigs feet! However, many people now have a 'Tourtière', a meat pie made from venison (or pork or beef).

A popular cake, especially in Quebec and for those of French decent is the Bûche de Noël - a chocolate log.

At the end of the Christmas season on Epiphany (Épiphanie in French), January 6th, people in the province of Quebec have a celebration called 'La Fêtes des Rois'. They bake a cake and place a bean in the middle. Whoever is the lucky discoverer of the bean, gets to be the king or queen, according to tradition. This is similar to a tradition in Spain.

In Southwestern Nova Scotia, many families eat lobster, a shellfish caught off the shores of Nova Scotia in the North Atlantic Ocean, on Christmas Eve.

In the 'Maritimes' (the Eastern Canadian Provinces of New Brunswick, Nova Scotia, and Prince Edward Island) at Christmas sweets called Barley Candy and Chicken Bones are very popular. They are made by local candy companies. Barley Candies are usually made on a stick (a bit like a lollipop) and are shaped like Santa, reindeer, snowmen, a Christmas tree and other symbols of Christmas. Chicken Bones are pink candy that tastes like cinnamon with a chocolate filling. You melt them in your mouth and once melted, the chocolate comes out!.

There is a large Ukrainian community in Canada (the third largest in the world following Ukraine and Russia). Canadian Ukrainian families will have the traditional 12 meal dishes for Christmas.