In China, only about one percent of people are Christians, so most people only know a few things about Christmas. Because of this, Christmas is only often celebrated in major cities. In these big cities there are Christmas Trees, lights and other decorations on the streets and in department stores. Santa Claus is called 'Shengdan Laoren' (old Christmas Man) and has grottos in shops like in Europe and America. The post men might dress up as Santa when delivering letters before Christmas! 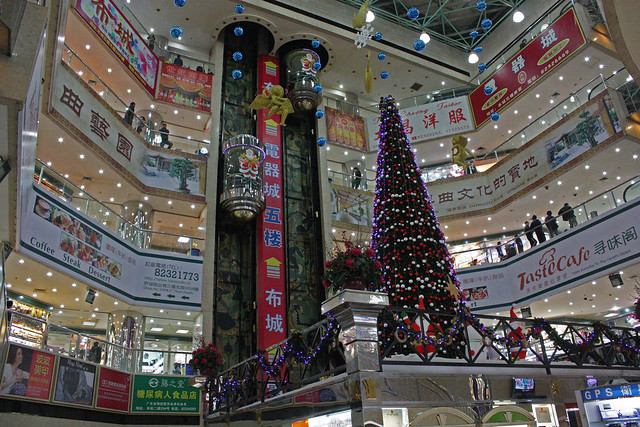 More young people are celebrating Christmas in cities where Christmas parties are becoming popular and it's also a time where young couples will be gifts for each other, a bit like Valentine's day.

Only a few people have a Christmas Tree. If people do have a tree it is normally a plastic one and might be decorated with paper chains, paper flowers, and paper lanterns (they might also call it a tree of light). The Christmas Trees that most people would see would be in shopping malls.

The strange thing is that most of the world's plastic Christmas Trees and Christmas decorations are made in China, but the people making them might not have decorations like them in their own homes at Christmas!

A tradition that's becoming popular, on Christmas Eve, is giving apples. Many stores have apples wrapped up in colored paper for sale. People give apples on Christmas Eve because in Chinese Christmas Eve is called "Ping'an Ye" (平安夜), meaning peaceful or quiet evening, which has been translated from the carol 'Silent Night'. The word for apple in Mandarin is "píngguǒ" (苹果) which sounds like the word for peace.

Some people go Carol singing, although not many people understand them or know about the Christmas Story. Jingle Bells is a popular Christmas song in China!

People who are Christians in China go to special services. Going to Midnight Mass services has become very popular.