In New Zealand, like its neighbor Australia, Christmas comes in the middle of the summer holidays.

Lots of people like to spend time of the beach, camping or at their Baches (holiday homes) for Christmas.

Many towns have a Santa parade with decorated floats (made by local businesses and churches, etc.), bands and marching teams. This can be any time from mid November onwards and is really a commercial event but everyone enjoys them. As it's warm, Santa is sometimes seen wearing 'jandals' (New Zealand sandals) and he might even swaps his red top for a New Zealand 'All Blacks' rugby shirt!

Children in New Zealand leave out carrots for Santa's reindeer and Santa might be left a beer and some pineapple chunks!

In the main cities like Auckland, Wellington, Christchurch and Hamilton, there are big Christmas light shows and displays. There are big carol services throughout the country, even in small town, villages and rural areas.

New Zealand has some special carols of its own. These include 'Te Harinui', Christmas in New Zealand and A Kiwiana Christmas! These are sung at most carol services around the country.

Many people have a Christmas Tree in their homes and decorate it like people in the USA or UK. Kiwis also have their own special Christmas Tree, the Pōhutukawa. It can grow to be a very large tree and has bright red flowers which are popular decorations and also feature on Christmas cards. It's been associated with Christmas since the mid 1800s. The Pōhutukawa is also important in Maori culture. Most Pōhutukawa grow on the North Island where they flower from mid December until around the 2nd week of January (some do grow on the south island and flower a later). The earlier it flowers, the hotter the summer is meant to be; and the longer it flowers, the longer summer will be! 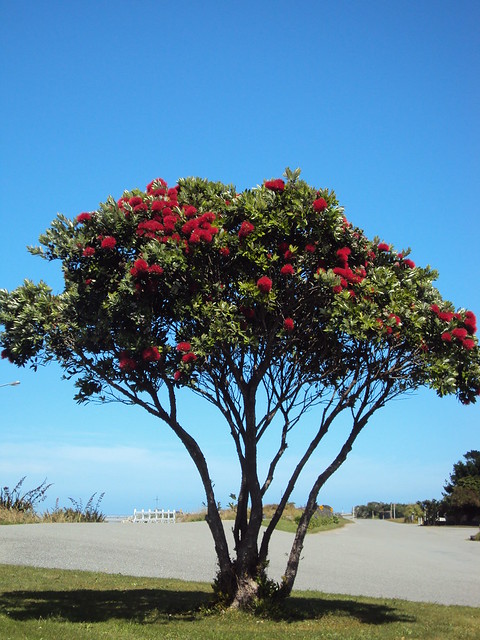 Many New Zealanders have a barbecue for Christmas lunch and this is becoming more popular. The food cooked on the barbecue is often ham slices or even venison or some other kind of exotic meat. Shrimps and other fish are also barbecued. White bait fritters are also popular. It's common to have Christmas Crackers on the Christmas dinner table.

Desserts are also very popular! Many still have a hot fruit pudding with custard and ice cream but cold desserts are popular. These include pavlova and whipped cream, meringues, cold fruit salad, jelly and ice cream. Drinks will include a range of soft drinks. Those who like it often over do the alcoholic drinks too. Here's a recipe for pavlova.

My relations from New Zealand have an English type Christmas meal in the middle of June (New Zealand's mid winter)! This meal will often be hot food such as roast chicken, roast lamb, cold ham, hot roast vegetables such as potatoes, pumpkin, sweet potato (New Zealand has its own sweet potato called a Kumara), and other root vegetables and also greens such as peas. 'Mid winter Christmas' meals in June or July are becoming more popular in businesses and clubs as a way of spending some time together. (My cousins also like coleslaw with their mid winter Christmas meal but it seems they are very unusual in doing this!)

People open their presents on Christmas Day once the whole family is all together. This is usually before the Christmas lunch.

In the Māori language, Santa Claus is called Hana Kōkō!