In Lebanon, 35% of the population follow a form of Christianity called Maronite Catholic. These Christians build manger scenes in their homes called a Nativity Crib. The crib is more popular than a Christmas Tree. It's traditional for the scene to be based around a cave rather than a stable. It's often decorated with sprouted seeds such as chickpeas, broad-beans, lentils, oats and wheat that have been grown on damp cotton wool in the weeks leading up to Christmas. The crib scene then becomes a focus for the prayer of people in the house.

Other common Catholic traditions such as going to a midnight mass service are also celebrated in Lebanon.

In the capital city, Beirut, big and glamorous Christmas parties are held in major hotels and lots of people like going to them, even if they're not Christian. Western-style commercial displays of poinsettias, Christmas lights, holly and community Christmas trees are also becoming more popular, although some people don't like them as they think they are too commercial. 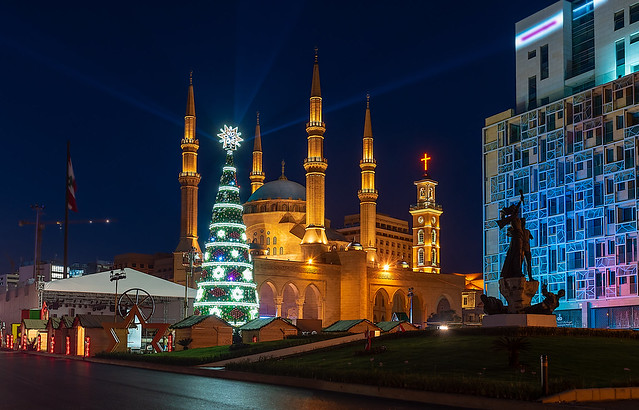 When people visit each other houses over the Christmas period, sugared almonds are often eaten with strong cups of coffee.

In Lebanon, Santa Claus/Father Christmas is known as Baba Noël.