The Star of Bethlehem

What was the Star of Bethlehem and what did the wise men or Magi actually see?!

Well, to be honest no one really knows! But there are many theories including comets, super novas, a conjunctions of planets or something entirely supernatural! (An angel with a flashlight?!?!)

There are only 12 verses in the Bible about the wise men and the star!

What the Bible Says:

After Jesus was born in Bethlehem in Judea, during the time of King Herod, Magi from the east came to Jerusalem and asked, 'Where is the one who has been born king of the Jews? We saw his star in the east and have come to worship him.'

When King Herod heard this he was disturbed, and all Jerusalem with him. When he had called together all the people's chief priests and teachers of the law, he asked them where the Christ was to be born. 'In Bethlehem in Judea,' they replied, 'for this is what the prophet has written: "'But you, Bethlehem, in the land of Judah, are by no means least among the rulers of Judah; for out of you will come a ruler who will be the shepherd of my people Israel.'" Then Herod called the Magi secretly and found out from them the exact time the star had appeared. He sent them to Bethlehem and said, 'Go and make a careful search for the child. As soon as you find him, report to me, so that I too may go and worship him.'

After they had heard the king, they went on their way, and the star they had seen in the east went ahead of them until it stopped over the place where the child was. When they saw the star, they were overjoyed.

On coming to the house, they saw the child with his mother Mary, and they bowed down and worshiped him. Then they opened their treasures and presented him with gifts of gold and of incense and of myrrh. And having been warned in a dream not to go back to Herod, they returned to their country by another route.

So what was the Star?

The wise men or Magi came from an area which is now in either Iraq, Iran, Saudi Arabia or the Yemen (then known as Persia, Arabia and Sheba). They're often called the 'Three Kings', but the Bible doesn't say how many there were, or that they were even kings! They became three because of the gifts they brought with them.

They were indeed 'wise men'. The Magi were 'Magupati', a title given to priests in a sect of the ancient Persian religions such as Zoroastrianism. Today we'd called them astrologers. Back then astronomy and astrology were part of the same overall studies (and 'science') and went hand in hand with each other. The magi would have followed the patterns of the stars religiously. They would have also probably been very rich and held in high esteem in their own society and by people who weren't from their country or religion. Find out more about the Magi in the Christmas Story.

They had seen an unusual new star in the sky, and knew that it told of the birth of a special King in Israel. But what did they see? The Bible says they 'saw it in the east' and then when they were in Jerusalem that it 'went ahead of them until it stopped over the place where the child was'.

A very accurate translation of 'saw it in the east' is 'in the first light of dawn', so not just in the East, but early in the morning. And when the Magi were in Jerusalem it would have been in the south, over Bethlehem.

We also know that it must have been a sign for something very new and unusual; that it signified (in their astrology) there was a new King in Israel and that it was worth traveling to find him! It would have also had to happen over a period of time, from when the Magi were in Persia to when they've traveled to Israel and met with King Herod. It also had to happen before King Herod died! Most people think Herod died in 4 BCE/BC.

So knowing the astrology and signs that the Magi understood, people have tried to find the star. Here are a few of the explanations: 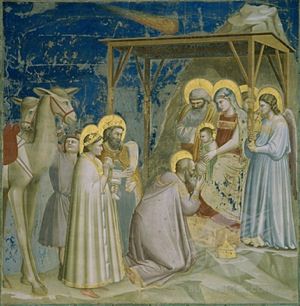 Comets streaking across the sky have been seen as signs of forthcoming events for thousands of years. The big problem with a comet is that they are nearly always seen as the sign of a death of a King or something else bad happening. They never signify a birth or the start of something good! Comets can look they've stopped somewhere or 'stand', but they don't stay around for very long.

The idea of a Comet might well have become popular when the Italian Renaissance painter Giotto di Bondone painted the Nativity (in about 1305) showing a star that looked like a comet. But the world's most famous comet, Haley's comet, had recently passed by the earth, so he was probably just painting that! 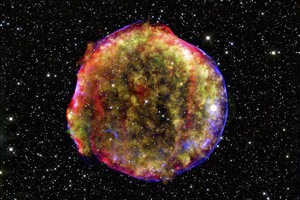 A super nova happens when a star explodes at the end of its life. There was a very bright super nova in 5 BCE/BC. But it wasn't in the right part of the sky and, like comets, super novas normally meant the end of something, not the beginning!

A super nova might have become popular after the great astronomer Johannes Kepler saw one in 1604!

This is where things seem to start making more sense and there are three good theories using conjunctions (when two or more items in the sky line up to look like one) of planets and other objects in the night sky. Although planets normally move across the sky, they can 'stop' in the sky. This is know as retrograde movement and happens because the earth goes around the sun quicker than the outer plants, so we sort 'over take' them for a bit and it looks like they either stop or actually go backwards for up to about 100 days!

There's an excellent free astronomy program called 'Stellarium' which displays the sky like a planetarium. I've used this to make the images below (click to see larger images). I viewed the stars from Baghdad, so seeing what the Magi would have done! (If you use the program, 7 BCE/BC is actually '-6' in astronomical time! Astronomical year numbering is a bit confusing, there's an extra year '0'!)

Jupiter and Saturn in Pisces

This theory has been made very popular by Prof David Hughes who lectures in astronomy at Sheffield University in the UK. It was originally written about by the Astronomer Johannes Kepler in 1603, but fell out of favor when Keppler had some rather unusual ideas later in his life!

The constellation of Pisces (the Fishes) had a special meaning in ancient Persian astronomy and astrology. It was the sign of Israel and of Kings. Jupiter was the Royal planet and Saturn represented old rulers. So a new 'star' being made of Jupiter and Saturn in this constellation could have meant a great deal!

There's also records in ancient writings from Babylon that the Magi, of that time, knew about the triple conjunction.

Jupiter and Moon in Aries

This theory was made by Dr Michael Molnar, a very experienced astronomer from New York, USA.

Dr Molnar collects coins and other historical objects with astronomical and astrological connections. He found, and purchased, a Roman coin from about the year 6 that had the symbol of Aries the Ram on it, looking back at a bright star.

It happened at dawn, in the east, on 17th April 6 BCE/BC (-5) and was very unusual. It's what's called an 'occultation' which is a special kind of eclipse which involves the earth, moon, sun and a planet. Because it was dawn, the glare of the sun would have made it quite hard to see, but the Magi would have known it was happening because they had studied the sky so well! 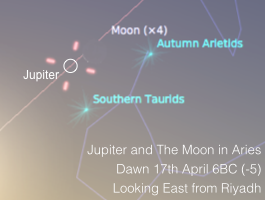 The red line shows Jupiter's orbit where it meets the moon.

Jupiter, Venus and the Star Regulus

Fairly recently, there has been a new theory by a lawyer from Texas. Rick Larson has done a lot of research and found a new contender. He looked at old manuscripts and found that the date of Herod's death might have been copied incorrectly and could well have been in 1 BCE/BC not 4 BCE/BC! This gives us another three years to look for stars!

Regulus is the brightest star in Leo and thought to be very special. The country/nation of Israel is often referred to as the 'Lion of Judah' so this meeting would have been important.

Mr Larson's theory concludes with that if you were in Jerusalem looking south, towards Bethlehem, on 25th/26th December 2 BCE/BC (-1) Jupiter would be 'standing' in Virgo the constellation of the Virgin (Mary being a virgin)!

I find the theory of Jupiter, Venus and Regulus interesting, but think Jupiter in Virgo might be a bit of a stretch as that's not that uncommon!

The images below show the five conjunctions and Jupiter in Virgo.

You can read about Rick Larson's theory on his Bethlehem Star website.

Does this mean that there was more than one Star? Well I don't see why not! The star marked the coming of the Son of God to earth, so I'm sure God would want to put on show!

I see no reason all why there can't be multiple 'Stars' of Bethlehem. If you start with Prof Hughes/Kepler star, it means 'There's going to be a new King who will rule over Israel' then shortly afterwards a new star appears (Dr Molnar) saying 'And a new King over the Roman world' (which was then most of the known world!) and then finishing with Rick Larson's it confirms this again saying 'The King is being born' (or has been born); GO TO ISRAEL NOW!

The Bible also says not to use astrology! However, it does talk of 'signs from God in the sky' but not to worship them or let them totally control your life (like astrology). You should worship God who made the stars, not the stars themselves!

The heavens declare the glory of God; the skies proclaim the work of his hands.
Day after day they pour forth speech; night after night they display knowledge.
There is no speech or language where their voice is not heard.
Their voice goes out into all the earth, their words to the ends of the world.

Some people also think that the star might have been something created by God, especially to guide the Wise men and that there isn't a scientific explanation.

As a Christian, I believe God could have done this. However, I think the star was probably a conjunction of planets, or something similar, that God planned into creation to mark the birth of Jesus, His son!

Some people think that the star was created by Satan - but that really doesn't make any sense! 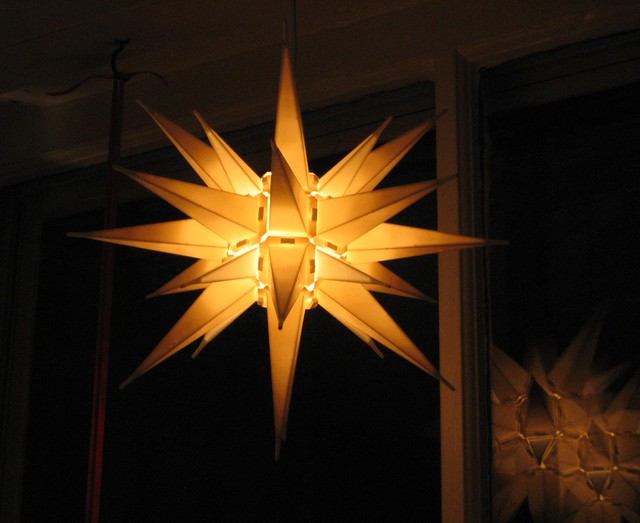