Why is Christmas Day on the 25th December?

Christmas is celebrated to remember the birth of Jesus Christ, who Christians believe is the Son of God.

The name 'Christmas' comes from the Mass of Christ (or Jesus). A Mass service (which is sometimes called Communion or Eucharist) is where Christians remember that Jesus died for us and then came back to life. The 'Christ-Mass' service was the only one that was allowed to take place after sunset (and before sunrise the next day), so people had it at Midnight! So we get the name Christ-Mass, shortened to Christmas.

Christmas is now celebrated by people around the world, whether they are Christians or not. It's a time when family and friends come together and remember the good things they have. People, and especially children, also like Christmas as it's a time when you give and receive presents!

The Date of Christmas

No one knows the real birthday of Jesus! No date is given in the Bible, so why do we celebrate it on the 25th December? The early Christians certainly had many arguments as to when it should be celebrated! Also, the birth of Jesus probably didn't happen in the year 1 but slightly earlier, somewhere between 2 BCE/BC and 7 BCE/BC, possibly in 4 BCE/BC (there isn't a 0 - the years go from 1 BC/BCE to 1!).

The first recorded date of Christmas being celebrated on December 25th was in 336, during the time of the Roman Emperor Constantine (he was the first Christian Roman Emperor). But it was not an official Roman state festival at this time.

However, there are many different traditions and theories as to why Christmas is celebrated on December 25th.

A very early Christian tradition said that the day when Mary was told that she would have a very special baby, Jesus (called the Annunciation) was on March 25th - and it's still celebrated today on the 25th March. Nine months after the 25th March is the 25th December! March 25th was also the day some early Christians thought the world had been made, and also the day that Jesus died on when he was an adult. The date of March 25th was chosen because people had calculated that was the day on which Jesus died as an adult (Nisan 14 in the Jewish calendar) and they thought that Jesus was conceived and had died on the same day of the year. 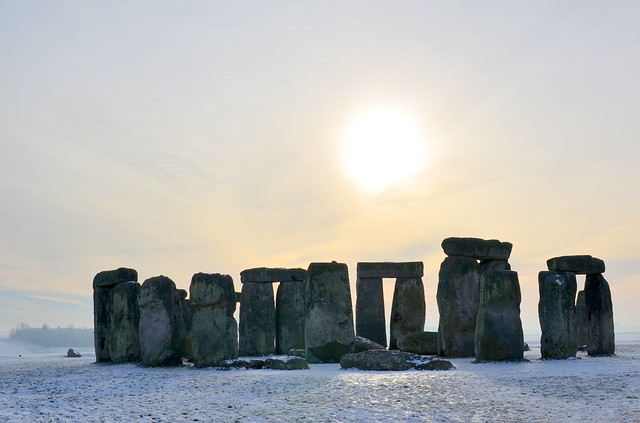 The Winter Solstice is the day where there is the shortest time between the sun rising and the sun setting. It happens on December 21st or 22nd. To pagans this meant that the winter was over and spring was coming and they had a festival to celebrate it and worshipped the sun for winning over the darkness of winter. In Scandinavia, and some other parts of northern Europe, the Winter Solstice is known as Yule. In Eastern Europe the mid-winter festival is called Koleda.

Because of the dates, some people say that the Christians 'took over' December 25th from these Roman festivals. However, there are records going back to around 200 of early Christians connecting the Nisan 14 to the 25th March, and so 25th December was a 'Christian' festival date many years before 'Sol Invictus'! (More recent studies have also found that the 'Sol Invictus' connection didn't appear until the 12th century and it's from one scribbled note in the margins of a manuscript. There's also evidence that 'Sol Invictus' might also have happened in October and not December anyway!)

Christmas had also been celebrated by the early Church on January 6th, when they also celebrated the Epiphany (which means the revelation that Jesus was God's son) and the Baptism of Jesus. (Like the December 25th date above, this was based on a calculation of Jesus's death/conception but from the 6th April not the 25th March.) Now Epiphany mainly celebrates the visit of the Wise Men to the baby Jesus, but back then it celebrated both things! Jesus's Baptism was originally seen as more important than his birth, as this was when he started his ministry.

The Jewish festival of Lights, Hanukkah starts on the eve of the Kislev 25 (the month in the Jewish calendar that occurs at about the same time as December). Hanukkah celebrates when the Jewish people were able to re-dedicate and worship in their Temple, in Jerusalem, again following many years of not being allowed to practice their religion.

Jesus was a Jew, so this could be another reason that helped the early Church choose December the 25th for the date of Christmas!

Most of the world uses the 'Gregorian Calendar' implemented by Pope Gregory XIII in 1582. Before that the 'Roman' or Julian Calendar was used (named after Julius Caesar). The Gregorian calendar is more accurate than the Roman calendar which had too many days in a year! When the switch was made 10 days were lost, so that the day that followed the 4th October 1582 was 15th October 1582. In the UK the change of calendars was made in 1752. The day after 2nd September 1752 was 14th September 1752.

Many Orthodox and Coptic Churches still use the Julian Calendar and so celebrate Christmas on the 7th January (which is when December 25th would have been on the Julian calendar). And the Armenian Apostolic Church celebrates it on the 6th January! In some part of the UK, January 6th is still called 'Old Christmas' as this would have been the day that Christmas would have celebrated on, if the calendar hadn't been changed. Some people didn't want to use the new calendar as they thought it 'cheated' them out of 11 days!

Christians believe that Jesus is the light of the world, so the early Christians thought that this was the right time to celebrate the birth of Jesus. They also took over some of the customs from the Winter Solstice and gave them Christian meanings, like Holly, Mistletoe and even Christmas Carols!

St Augustine of Canterbury was the person who probably started the widespread celebration of Christmas in large parts of England by introducing Christianity to the regions run by the Anglo-Saxons in the 6th century (other Celtic parts of Britain were already Christian but there aren't many documents about if or how they celebrated the birth of Jesus). St Augustine of Canterbury was sent by Pope Gregory the Great in Rome and that church used the Roman Calendar, so western countries celebrate Christmas on the 25th December. Then people from Britain and Western Europe took Christmas on the 25th December all over the world!

If you'd like to know more about the history behind the dating of Christmas, then read this very good article on Bible History Daily (goes to another site).

So when was Jesus Born?

There's a strong and practical reason why Jesus might not have been born in the winter, but in the spring or the autumn! It can get very cold in the winter and it's unlikely that the shepherds would have been keeping sheep out on the hills (as those hills can get quite a lot of snow sometimes!).

During the spring (in March or April) there's a Jewish festival called 'Passover'. This festival remembers when the Jews had escaped from slavery in Egypt about 1500 years before Jesus was born. Lots of lambs would have been needed during the Passover Festival, to be sacrificed in the Temple in Jerusalem. Jews from all over the Roman Empire traveled to Jerusalem for the Passover Festival, so it would have been a good time for the Romans to take a census. Mary and Joseph went to Bethlehem for the census (Bethlehem is about six miles from Jerusalem).

In the autumn (in September or October) there's the Jewish festival of 'Sukkot' or 'The Feast of Tabernacles'. It's the festival that's mentioned the most times in the Bible! It is when Jewish people remember that they depended on God for all they had after they had escaped from Egypt and spent 40 years in the desert. It also celebrates the end of the harvest. During the festival, Jews live outside in temporary shelters (the word 'tabernacle' come from a latin word meaning 'booth' or 'hut'). 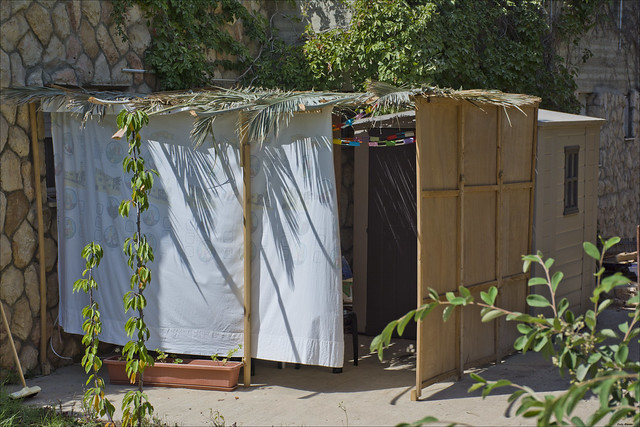 Many people who have studied the Bible, think that Sukkot would be a likely time for the birth of Jesus as it might fit with the description of there being 'no room in the inn'. It also would have been a good time to take the Roman Census as many Jews went to Jerusalem for the festival and they would have brought their own tents/shelters with them! (It wouldn't have been practical for Joseph and Mary to carry their own shelter as Mary was pregnant.)

The possibilities for the Star of Bethlehem seems to point either spring or autumn.

The possible dating of Jesus birth can also be taken from when Zechariah (who was married to Mary's cousin Elizabeth) was on duty in the Jewish Temple as a Priest and had an amazing experience. There is an excellent article on the dating of Christmas based on the dates of Zechariah's experience, on the blog of theologian, Ian Paul. With those dates, you get Jesus being born in September - which also fits with Sukkot!

The year that Jesus was born isn't known. The calendar system we have now was created in the 6th Century by a monk called Dionysius Exiguus. He was actually trying to create a better system for working out when Easter should be celebrated, based on a new calendar with the birth of Jesus being in the year 1. However, he made a mistake in his maths and so got the possible year of Jesus's birth wrong!

Most scholars now think that Jesus was born between 2 BCE/BC and 7 BCE/BC, possibly in 4 BCE/BC. Before Dionysius's new calendars, years were normally dated from the reigns of Roman Emperors. The new calendar became more widely used from the 8th Century when the 'Venerable Bede of Northumbria' used it in his 'new' history book! There is no year '0'. Bede started dating things before the year 1 and used 1 BCE/BC as the first year before 1. At that time in Europe, the number 0 didn't exist in maths - it only arrived in Europe in the 11th to 13th centuries!

So whenever you celebrate Christmas, remember that you're celebrating a real event that happened about 2000 years ago, that God sent his Son into the world as a Christmas present for everyone!

As well as Christmas and the solstice, there are some other festivals that are held in late December. Hanukkah is celebrated by Jews; and the festival of Kwanzaa is celebrated by some Africans and African Americans takes place from December 26th to January 1st.

Find out why Christmas is sometimes called Xmas!