Christmas in the State of Palestine / Palestinian Territories

Christmas is very important in the Palestinian territory of the West Bank as it contains Bethlehem, the town in which Jesus was born. Bethlehem is about six miles (10 kilometres) south of Jerusalem. Bethlehem means 'house of bread' in Hebrew/Aramaic (בֵּית לֶחֶם) and 'house of meat' in Arabic (بيت لحم). The Hebrew/Aramaic name predates the Arabic one by several hundred years and was the meaning used in the Bible and Christmas story. The name comes from the fact the area is famous for being very fertile and good for farming, particularly for growing wheat which was made into bread.

On Christmas Eve there is a parade through the town. This is very important to the Christian part of the population. There are bagpipe bands in the parade, which you might not expect! Playing the bagpipes is a tradition left over from when the British army occupied the area between 1920 and 1948. People also dress up as Santa Claus and give out sweets. The streets and main square are decorated with lights. 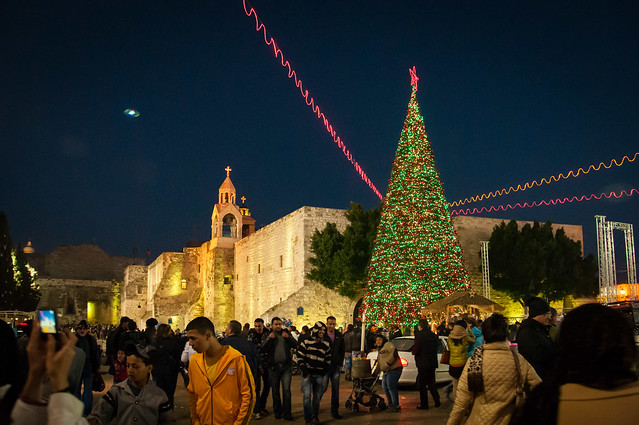 Perhaps the most famous part of Christmas in Bethlehem is the church service of the Mass of the Nativity. It is held on Christmas Eve afternoon/evening/midnight in the Church of the Nativity. The Church is built over the place where it's traditionally thought that Jesus was born. There's a small door into the Church called the door of humility. The church was built, by the romans, about 500 years after Jesus was born. The most holy part of the church is the Grotto of the Nativity, which is under the main altar. A silver star marks the place where Jesus was meant to have been born. 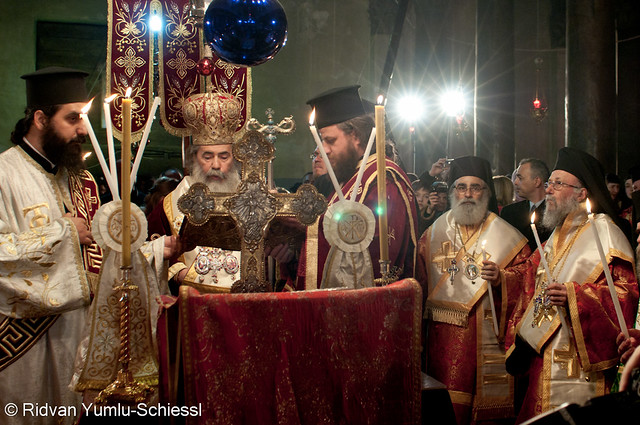 It had been prophesied in the Bible that the Jewish Messiah or Savior (who Christians believe Jesus is) would be born in Bethlehem.

The Church is administered by three churches, the Roman Catholic Church, the Greek Orthodox Church and the Armenian Apostolic Church. The Mass service is led by the Roman Catholic Bishop of Jerusalem. Many local political people go to the service, Christians, Muslims and Jews. The church is crowded and lots of frankincense, one of the gifts bought to the baby Jesus, is burnt. People also sing Christmas Carols on Christmas Eve evening in Manger Square, a large paved courtyard in front of the Church.

The Greek Orthodox and Armenian Apostolic Churches don't celebrate Christmas on December 25th, but rather January 6th & 7th. They hold services on those days.

Christmas is more widely celebrated in the State of Palestine / Palestinian Territories than it is in Israel.