Around Christmas time in Sweden, one of the biggest celebrations is St. Lucia's Day (or St. Lucy's Day) on December 13th. The celebration comes from stories that were told by Monks who first brought Christianity to Sweden.

St Lucia was a young Christian girl who was martyred, killed for her faith, in 304. The most common story told about St Lucia is that she would secretly bring food to the persecuted Christians in Rome, who lived in hiding in the catacombs under the city. She would wear candles on her head so she had both her hands free to carry things. Lucy means 'light' so this is a very appropriate name.

December 13th was also the Winter Solstice, the shortest day of the year, in the old 'Julian' Calendar and a pagan festival of lights in Sweden was turned into St. Lucia's Day.

St. Lucia's Day is now celebrated by a girl dressing in a white dress with a red sash round her waist and a crown of candles on her head. Small children use electric candles but from about 12 years old, real candles are often used! 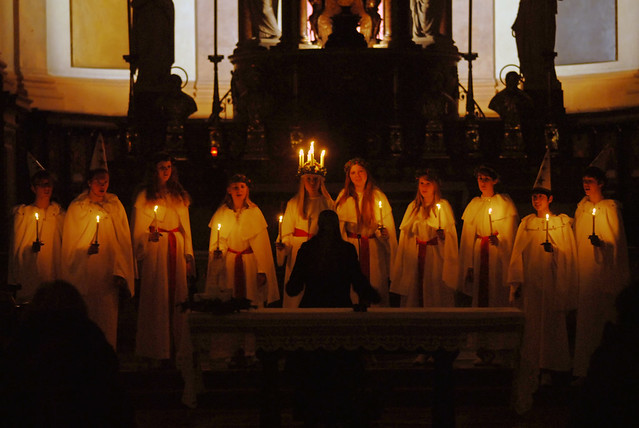 The crown is made of Lingonberry branches which are evergreen and symbolise new life in winter. Schools normally have their own St. Lucia's and some town and villages also choose a girl to play St. Lucia in a procession where carols are sung.

Small children sometimes like dressing up as Lucia (with the help of their parents!). Also boys might dress up as 'Stjärngossar' (star boys) and girls might be 'tärnor' (like Lucia but without the candles).

A popular food eaten at St. Lucia's day are 'Lussekatts', St Lucia's day buns flavored with saffron and dotted with raisins which are eaten for breakfast.

St Lucia's Day first became widely celebrated in Sweden in the late 1700s. St Lucia's Day is also celebrated in Denmark, Norway, Finland, Bosnia, and Croatia. In Denmark it is more a of a children's day and in some part of Italy, children are told that St Lucy brings them presents. They leave out a sandwich for her and the donkey that helps carry the gifts!

On the first Sunday of Advent, called "Första Advent" in Swedish, many Swedes will put their Advent candles and/or an Advent Star in windows of their homes. Traditionally the Advent candles are four candles set in a 'box' which is decorated with greenery. One candle is lit on each Sunday during Advent. This custom came from the German Advent wreath. Often now an electric 'stepped' candle display is used instead of real candles.

Advent Stars were first made in the 1930s from red paper. The stars normally have seven (or sometimes nine) points and are about 30-45cms (12 to 18 inches) across. They have holes in them and a light is put in them (now a safe electric one) so the light shines out. The stars are hung in a window to remind people that the wise men followed a star to find Jesus in the Christmas story. The stars are often now white and might be made of straw, wood or metal as well as paper. 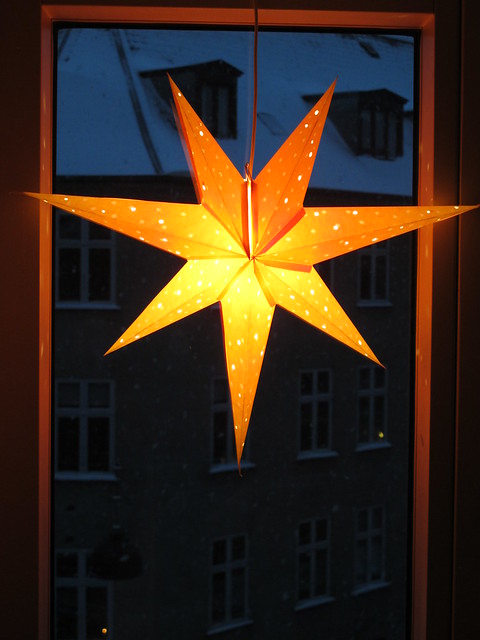 Christmas Eve is also very important in Sweden. This is when the main meal (well really a feast!) is eaten.

This is often a 'julbord' which is a buffet, eaten at lunchtime. Cold fish is important on the julbord. There is often herring (served in many different ways), gravlax (salmon which has been cured in sugar, salt and dill) and smoked salmon.

Other dishes on the julbord might include cold meats including turkey, roast beef and 'julskinka' (a Christmas ham); cheeses, liver pate, salads, pickles and different types of bread and butter (or mayonnaise). There will also be warm savoury foods including meatballs, 'prinskorv' (sausages), 'kåldolmar' (meat stuffed cabbage rolls), jellied pigs' feet, lutfisk (a dried cod served with a thick white sauce) and 'revbenspjäll' (oven-roasted pork ribs). Vegetables such as potatoes and red cabbage will also be served. Another potato dish is 'Janssons Frestelse' (matchstick potatoes layered with cream, onion and european sprats [a small fish] that is baked to a golden brown). There's also 'dopp i grytan' which is bread that is dipped in the broth and juices that are left over after boiling the ham.

The dessert of the julbord might be a selection of sweet pastries, some more pepparkakor biscuits and some home made sweets!

Wow, I think I like the sound of a Jolbord! To wash all that food down you can have some 'glogg' which is sweet mulled wine and some coffee to finish off the meal!

Another popular food at Christmas in Sweden is 'risgrynsgröt' (rice porridge that's eaten with 'hallonsylt' [raspberry jam] or sprinkled with some cinnamon). It's often eaten during the evening after people have exchanged their presents.

If there is any risgrynsgröt left over, when it's cold it can be mixed with whipped cream and eaten with a warm fruit sauce. This is called 'Ris a la malta' and sounds rather yummy!

Another popular and important thing that many Swedes do on Christmas Eve afternoon is to watch Donald Duck! Every year, since 1959, at 3.00pm on Christmas Eve, the TV station TV1 shows the Disney special "From All of Us to All of You" or in Swedish it's "Kalle Anka och hans vänner önskar God Jul" meaning "Donald Duck and his friends wish you a Merry Christmas." About 40 to 50% of the Swedish population stop to watch it!

Like their neighbors in Finland, there was a traditional belief in Sweden that a 'Yule Goat' was connected with the mid winter festival. In Sweden it was thought to be an invisible spirit that looked on and made sure all the preparations were going well. Between Christmas and New Year, men would sometimes dress up as goats and go from house to house singing songs and playing tricks! This is known as 'Julebukking'.

Now, the goat is mainly seen as a straw ornament which guards the house and Christmas Tree! Straw is used as a decoration in homes, to remind them that Jesus was born in a manger. Christmas Tree decorations that are made of straw are also very popular.

In the city of Gävle, a huge straw goat is built every year for the start of Advent. It's 13m/43ft tall and takes two days to put up! It has a large metal structure on the inside and is covered with straw. The tradition started in 1966. The first Gävle Yule Goat was burnt down on New Year's Eve 1966 and ever since it's been the target for vandals. In its 50 year history it's only survived throughout the Christmas and New Year period about 12 times! In 2016, its 50th year, it was burnt down in less than two days! 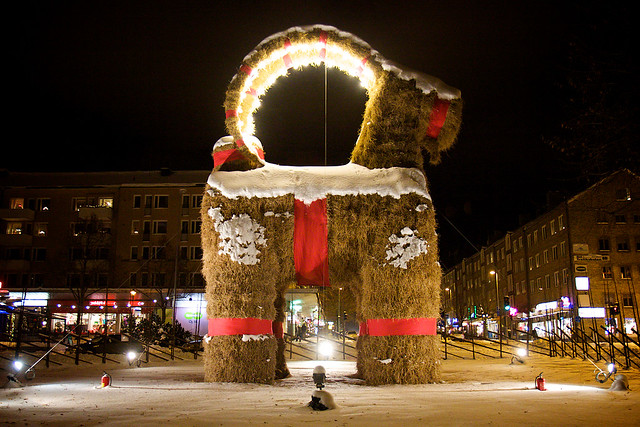 In Sweden, presents are brought by Santa who's known as 'Jultomte' or by the 'Tomte' (Christmas Gnomes). Tomte are also sometimes called 'Nissar' (male elves/gnomes) or 'Nissor' (female gnomes/elves).

The 'Secret Santa' way of giving gifts might have also started in Sweden with a custom called 'Julklapp' (which means 'Christmas knock'). Several hundred years ago there was a tradition where you would knock on the door of a friend or neighbour and then leave a small gift (often made from straw or wood) behind on the door step. The gift would have a little motto/riddle with it, to help people work out who had left the gift.