In Bulgaria, Christmas is celebrated on December 25th. Many countries in Eastern Europe celebrate Christmas on January 7th as most Orthodox Churches use the old Julian Calendar, but the Bulgarian Orthodox Church uses the Gregorian calendar, so Christmas in on the 25th December.

For many Bulgarians, the preparations for Christmas start with Advent which lasts 40 days in the Orthodox Church and starts on November 15th.

One legend in Bulgaria is that Mary started her labor on 'Ignazhden', December 20th (Saint Ignatius of Antioch's Day) and she gave birth on Christmas Eve but the birth of Jesus wasn't announced until Christmas Day. The 20th is also the traditional 'new year' in Bulgarian culture. It's traditional to eat a special ring shaped caked called 'kolaks' on this day.

Christmas Eve (called 'Budni Vecher') is a very important day and the main Christmas meal is eaten in the evening of Christmas Eve.

The meal should traditionally have an odd number of dishes in it (normally 7, 9 or 11) and an odd number of people sitting around the table. (Salt, pepper and sugar can count as separate dishes!)

Straw is often put under the tablecloth and you might even bring a wooden plough into the house and put it behind the door! These are meant to help you have good crops during the next year.

There's a special round and decorated loaf of bread called 'pita' which has a coin baked in it. If you find the good you're meant to have good luck for the next year! The bread is normally cut by the oldest person at the meal and they hand it around the table.

It's normally a rich vegan meal and includes dishes made of different such as beans soup, 'sarmi' cabbage leaves stuffed with rice, peppers stuffed with rice, boiled wheat with sugar and walnuts, different kinds of pastries, some kolaks, lots of fruits and nuts like dried plums, dried apricots, oranges and tangerines and 'oshav' a dried fruit compote. But it's only after midnight that dishes with non vegan incredients are served and eaten! These will include foods like 'banitsa' (a pastry filled with yogurt and feta cheese) and 'baklava' (a dessert made of filo pastry that's filled with chopped nuts and soaked with syrup or honey). 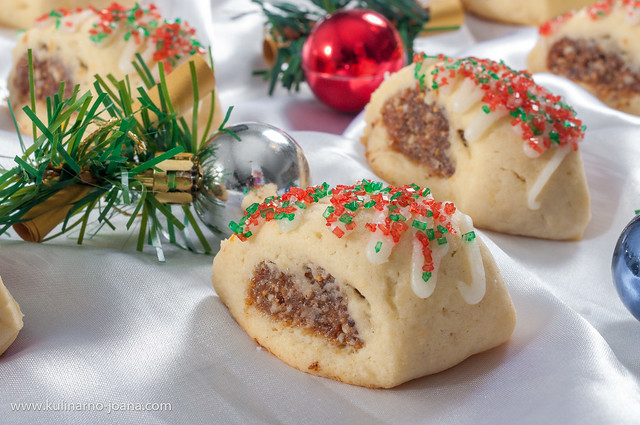 Walnuts are especially popular. If your walnut is delicious you will have a good year, but if it's empty or has a small nut you'll have a bad year!

It's traditional that the table is left with all the food on it until the morning of Christmas Day. Some people think their ancestors might like something to eat during the night!

On Christmas Day some families will have another big meal, but this time there will be meat, normally some kind of pork.

Following the Christmas Eve meal some people will go to a Midnight Mass service. You might also hear Koledari (carol singers) which are normally young men who go carol singing dressed in traditional clothing. The singing can only start after midnight. The singers often go round singing all night, so the sun never catches them! When they reach a house they sing 'the house song' praising and wishing the house well. Having the Koledari visit your home is meant to be good luck. The songs are often in two parts with half of the singers singing the song and then the other half repeating it back. After the singing, the head of the house will give the Koledari food to thank them for singing. The special foods include 'Koledni gevreci' (round buns) and 'banitsa' (a layered pastry filled with cheese).

Christmas Trees now popular in Bulgaria and towns are decorated with Christmas lights. Some people will still have a traditional Yule Log (normally from an oak, elm or pear tree) known as a 'badnik' or 'budnik' which is brought into the house on Christmas Eve.