Austria shares many Christmas traditions with its neighbor Germany, but also has many special Christmas customs of its own.

During Advent, many families will have an Advent Wreath made from evergreen twigs and decorated with ribbons and four candles. On each of the four Sundays in Advent, a candle is lit and a carol or two might be sung!

Most towns will have a 'Christkindlmarkt' (Christmas market) from late November or early December, selling Christmas decorations, food (like gingerbread) and Glühwein (sweet, warm mulled wine). Cities like Vienna, Innsbruck and Salzburg have huge markets and people from all over the world visit them. 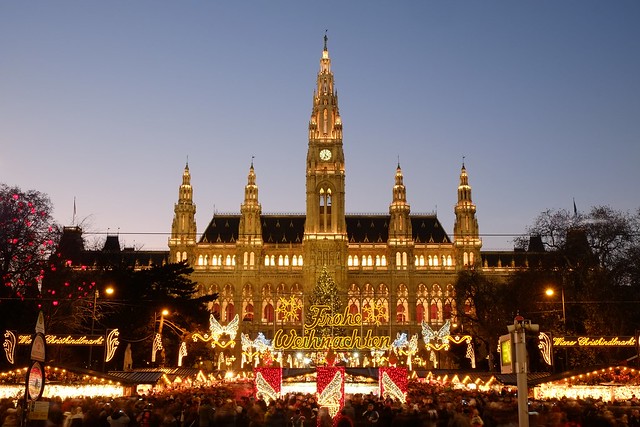 Every town will also have a large Christmas Tree in the town square. In homes, trees are decorated with gold and silver ornaments and stars made from straw.

Christmas in Austria really starts around 4.00pm on Christmas Eve ('Heilige Abend') when the tree is lit for the first time and people come to sing carols around the tree. The most famous carol is Silent Night ('Stille Nacht'), which was written in Austria in 1818.

The national pop radio station Ö3 has special Christmas 'jingles' and plays Christmas music from 4.00pm on 'Heilige Abend'. It's used by many people as the 'soundtrack' to the start of Christmas. This is the version of 'Stille Nacht' played on Ö3 in 2007: https://www.youtube.com/watch?v=J22A1vs4K7o

Traditionally the Christmas tree is brought in and decorated on Christmas Eve. Decorations include candles (now often electric) and sparklers. For children other important decorations are sweets, such as small liqueur-filled chocolate bottles, chocolates of various kinds, jelly rings and 'Windbäckerei' (meringue, usually in the form of rings, stars, etc.).

Some children believe that the 'Christkind' decorates the tree. The Christkind also brings presents to children on Christmas Eve and leaves them under the tree. (The Christkind is described as a golden-haired baby, with wings, who symbolizes the new born Christ.)

Some children might also get a present from St Nicholas on December 6th. In Austria, St Nicholas is often accompanied by the Krampus, He a big horned monster clothed in rags and carries chains. He's meant to punish children who have been bad!

The main Christmas meal is also eaten on Christmas Eve. It's often 'Gebackener Karpfen' (fried carp) as the main course; this is because Christmas Eve was considered a 'fasting' day by many Catholics and no meat could be eaten. However 'Weihnachtsgans' (roast goose) and roast turkey are becoming more popular. Dessert can be chocolate and apricot cake 'Sachertorte' and Austrian Christmas cookies 'Weihnachtsbaeckerei' like 'Lebkuchen' (honey gingerbread) and 'Vanillekipferl' (almond cookies made in the shape of a horse shoe).

Some 'really cool' people, or those who live in the mountains, might go skiing on Christmas Day. Skiing on New Year's Day is also popular.

Every year, Austria's capital city, Vienna, holds a world famous classical music concert 'NeuJahrsKonzert' which takes place during the morning of New Year's day. It's held in the 'Großer Saal' (large hall) of the Musikverein, the concert hall of the Viennese Music Association. The concert is played by the Vienna Philharmonic Orchestra and always features music from the Strauss family: Johann Strauss I, Johann Strauss II, Josef Strauss and Eduard Strauss. It is famous for its waltz music. During the last piece played, The Blue Danube, the introduction is interrupted by applause from the audience and the musicians then wish them a Happy New Year! The concert is shown around the world on TV.

For Epiphany, 6th January, many people will put a special sign in chalk over their front door. It's a reminder of the Wise Men that visited the baby Jesus. It's made from the year split in two with initials for 'Christus mansionem benedicat' which is 'May Christ bless the house' in latin. So 2022 would be: 20*C*M*B*22. The sign is meant to protect the house for the coming year. (Some people say the 'C M B' can also represent the names that are sometimes given to 'the three wise men', Caspar, Melchior and Balthazar, in the middle.) As in parts of Germany, the sign is traditionally written on the door by the Sternsinger (or star singers), carol singing children who dress up like the Wise men; and one who carries a star on a stick as a symbol for the Star of Bethlehem.

Another famous event that happens over the new year in Austria and Germany is the Ski Jumping 'Four Hills Tournament' ('Vierschanzentournee'). It starts in Germany with Oberstdorf (Germany) on the 29th or 30th December and Garmisch-Partenkirchen (Germany) on New Year's Day; and continues in Austria with Innsbruck (Austria) on 3rd or 4th of January and Bischofshofen (Austria) on the 6th January. I'm a big Ski Jumping fan, so I watch it (and I support the Austrians)! 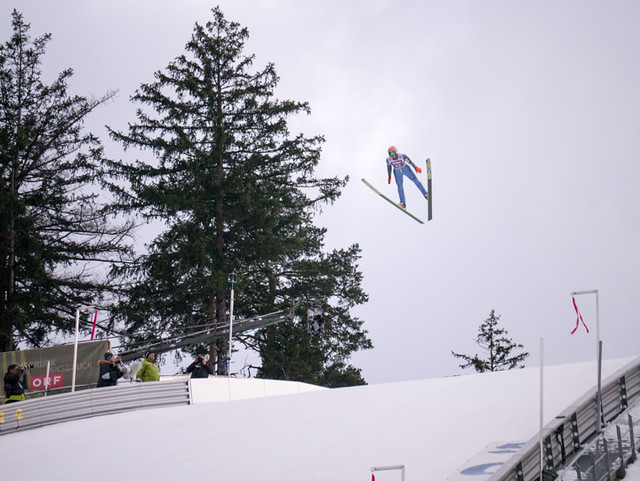